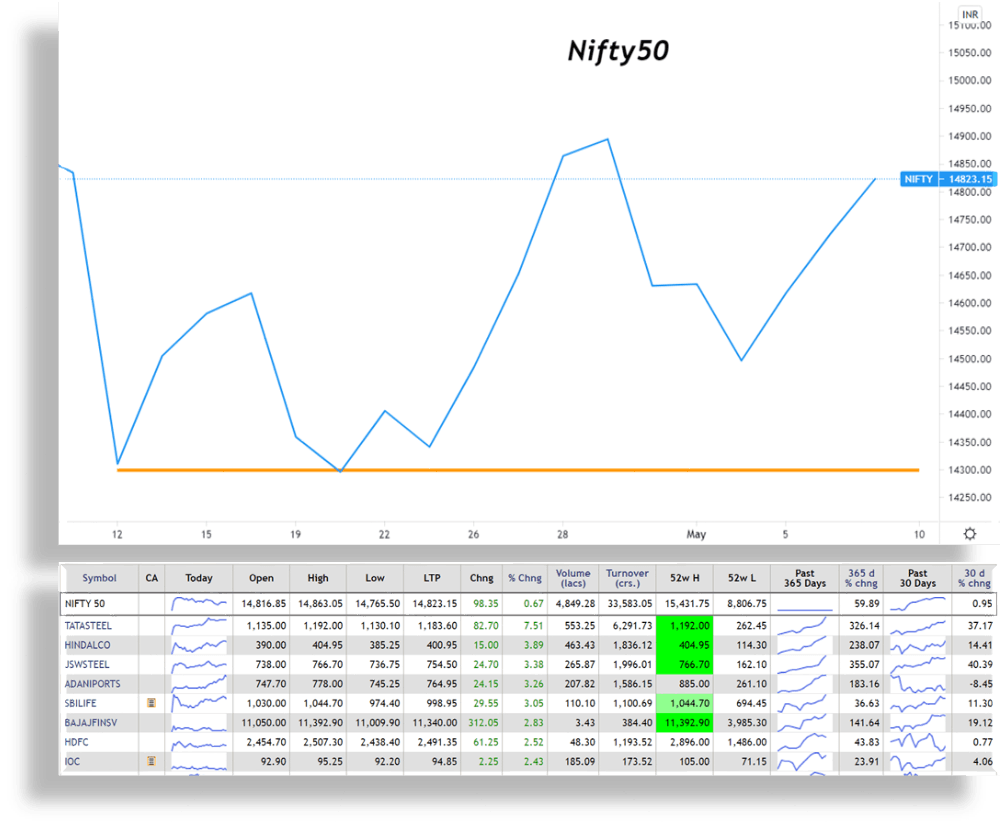 The Indian stock market, when taken as a whole, has seemingly ignored the Covid crisis the country is currently facing. By way of illustration, the country’s two leading indices, the NSE Nifty50 and the BSE Sensex, have barely moved in the past 30 days. The former is up by approximately 1 per cent, while the latter is down by the same amount.

Scanning through the list of the companies included in the NIFTY50 reveals four of the five biggest gainers are related to steel or aluminium manufacturing. For one, JSW Steel Limited (NSE: JSWSTEEL) is up 24% since April 8, 2021. The Heavy manufacturers are potentially misrepresenting the resilience of the Indian exchanges.

The gains made in this time frame are not typical; rather, they are exaggerated. Heavy manufacturers share prices have climbed exaggeratedly in line with the rise in prices for global commodities such as steel, copper, and Aluminium. The majority of these stocks are touching 52-week highs.

Investors show little reservation in scoping up these particular stocks, even while the second Covid wave sweeps through the country. It is not entirely imprudent to suppose that these stocks will see some pay-off in the long run. For a good reason, a potential shut down in India will further exacerbate the supply and demand issues currently helping push up commodity prices.

Futures for raw materials such as copper and steel are at record highs. Copper futures are sitting at US$4.7640 per pound while spot steel is at ~US$200 per dry metric ton. Similarly, Aluminium futures sitting at a ten-year high.

Rupee Strengthening against the USD, but weakening elsewhere

With demand for steel, copper, etc, coming from overseas, the Rupee has strengthened with some conviction for the past week. Particularly within the last two days of the trading week. After breaking above 0.1355 against the USD on Thursday, the Rupee eventually climbed to 0.01364. For now, the Rupee has crawled out of its year-long ditch against the USD, reaching a high not seen since April last year. The Rupees momentum could carry into the coming week. If so, expect to see a price of 0.0138 tested.

Delving further into the Rupee’s performance, all is not as well. The INR has lost ground to much of its other major trading partners. In the past few days, the Rupee has notched up losses against the AUD, CAD, and EUR. On the other hand, both the INRGBP and INRCNY were in a hibernation state last week, not moving far in either direction.