Is the US a "shining city on a hill," as then-President Ronald Reagan said? The new occupant of the White House, Joe Biden, has helped gold shine by showing determination in pumping funds into the economy. The upswing now depends on bipartisan support, vaccine developments, and the Federal Reserve's decision.

President Joe Biden has been calling for unity and urgent support to the economy. His inauguration speech and actions since taking office have convinced investors that there is a growing chance that Congress approves – at least a large part of his proposed $1.9 trillion stimulus bill to support the economy. Treasury Secretary nominee Janet Yellen also called for going "big".

Gold has risen in response to higher prospects of more money flooding the world – potentially funded by debt, as taxes seem to have slipped off the agenda. However, concerns about a Republican pushback have limited gold's gains.

Coronavirus cases have continued rising worldwide, supporting the case for more government funds. Several European countries have extended their restrictions and the UK, unfortunately, recorded a death toll described by Prime Minister Boris Johnson as "appalling. In the US, there is no relenting, with mortalities surpassing the 400,000 mark.

The European Central Bank left its policy unchanged and initially hinted it could cut its bond-buying scheme. However, ECB President Christine Lagarde later stressed that the bank remains flexible on the topic.

Overall, the ongoing flow of funds has been keeping XAU/USD underpinned.

Next week in gold: Congress, the Fed and the virus

After the inauguration party and calls for unity, the hard work begins for Biden. While Republicans are set to lower their tone after President Donald Trump's departure, they are may still fight against expenditure they dislike.

Will Democrats manage to pass a large part of their plan on their own or go for quick yet smaller funding? For gold and broader markets, the more and the sooner, the better. Any sign of bipartisan support could push the precious metal higher, while discord would weigh on it.

The 46th President also aims to boost America's vaccination campaign, helping the world's largest economy get out of the misery. If meaningful progress is made, it could weigh on gold prices as it implies reduced government funding.

If Biden makes progress, will Federal Reserve be ready to fund it? The world's most powerful central bank is set to signal no changes to its bond-buying scheme's current pace – $120 billion/month. While Federal Reserve Chair Jerome Powell put an end to talk about tapering down the bank's largesse, he has yet to open the door to expanding the scheme fully. Any clue about purchasing more debt would be music to gold bulls' ears.

The other top events on the economic calendar are US Durable Goods Orders for December and Gross Domestic Product. Signs of economic weakness may prompt lawmakers and the Fed to act. The consensus is for around 4.4% growth in the fourth quarter, but recent consumption figures have been disappointing.

Here are the key events for gold on the economic calendar:

Gold is at crossroads – rising gradually from the lows but has yet to move higher connivingly. Momentum on the daily chart is marginal to the downside, but the recent moves have pushed XAU-USD above the all-important 200-day Simple Moving Average. It is still struggling with the 50-day SMA while trading below the 100-day SMA.

All in all, the picture is mixed. The current convergence may eventually give way to a robust directional trade, but it is unclear which direction.

Biden's determination will likely push gold higher, but a clear uptrend may have to wait.

The FX Poll is showing that experts are cautious about gold prices in the short and medium terms. In the longer term, the price target is more elevated, yet a fierce debate rages among those polled. 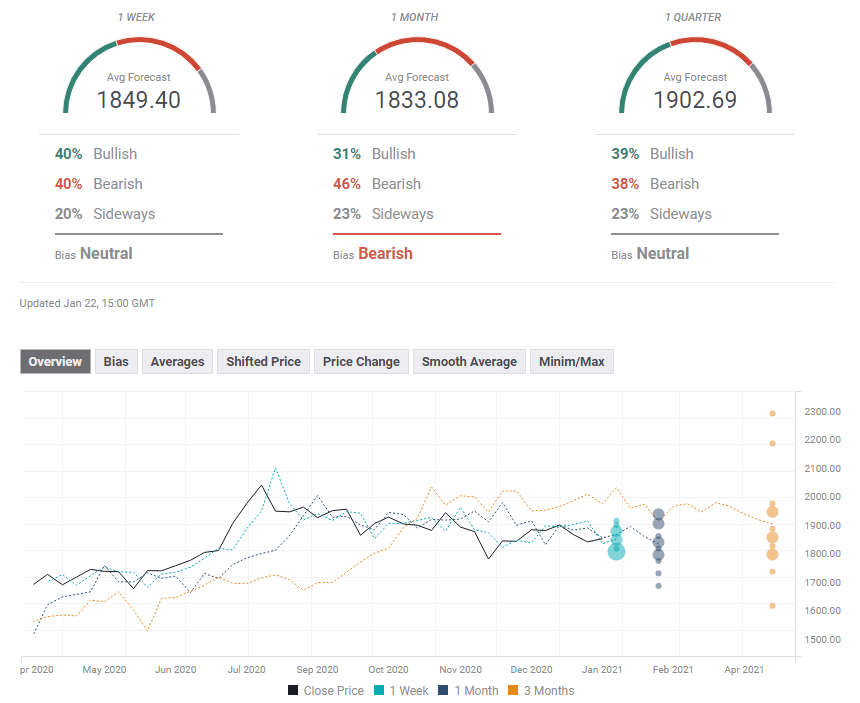