From Boris to Biden – GBP/USD has received a boost from Britain's vaccination campaign and America's potential stimulus. Can the uptrend continue? Economic indicators such as US GDP and UK employment compete with the Federal Reserve, stimulus progress and covid data.

This week in GBP/USD: Biden boost

President Joe Biden's fresh energy has been inspiring markets – the freshly inaugurated Commander-in-Chief's efforts to pass his $1.9 trillion stimulus bill and call for unity have boosted markets and weighed on the safe-haven dollar. Investors may have also felt relief due to the calm – some feared fresh violence after the Capitol storming earlier in the month.

Biden's actions on the vaccination front already have a practical impact that encourages investors, even if the large stimulus package may wait.

On the other side of the GBP/USD equation, sterling shined mostly to Britain's progress against COVID-19. While deaths from the virus hit a depressing daily record of 1,820, infections continue falling, providing hope that hospitals will feel some relief soon. On the other hand, reports of an extended lockdown – all the way to the summer – have limited sterling's gains. 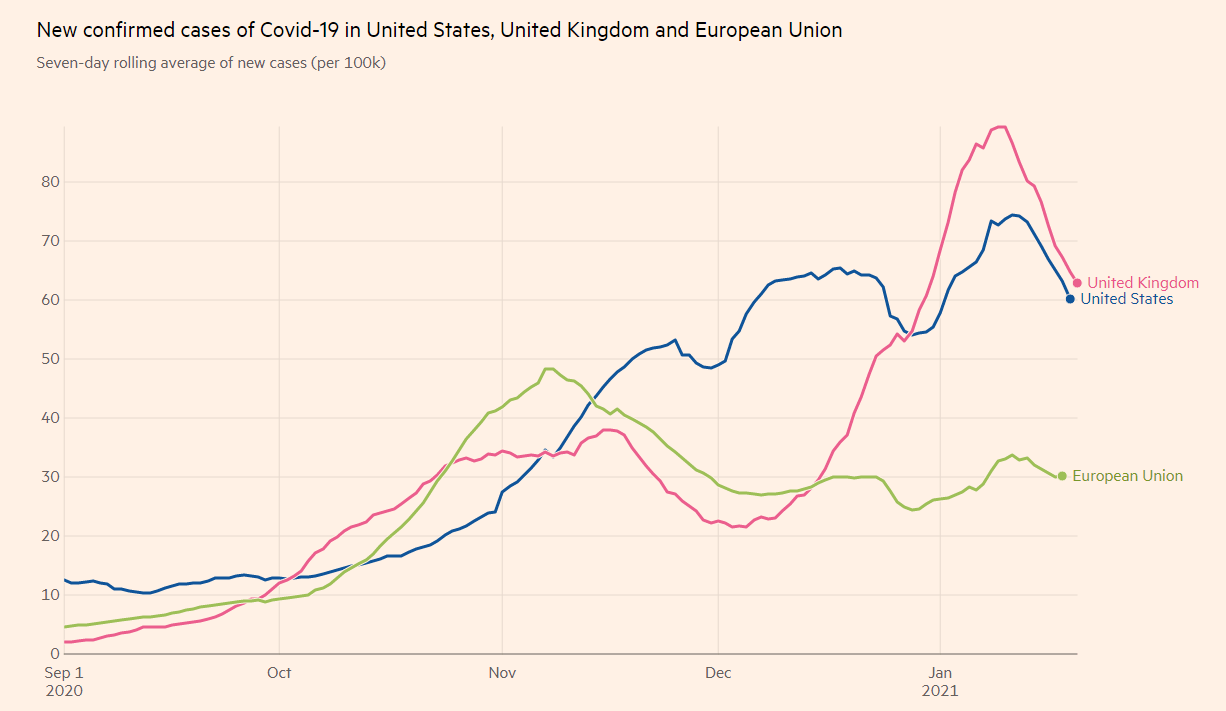 A ramp-up compounded the downfall in covid cases in the UK's pace of vaccinations, which has topped 340,000 injections per day – with both developments supporting sterling. GBP/USD has hit fresh highs above 1.37.

Economic data played second-fiddle to Biden's reception and the UK's progress and contributed to a bump-up in the cable. The UK's Consumer Price Index ended 2020 with an increase of 0.6%, marginally above expectations, while US Jobless Claims are at the alarmingly high level of 900,000.

While Prime Minister Boris Johnson is focusing on the appalling mortality figures, investors are eyeing immunization statistics to monitor progress – as the PM tied the easing of restrictions to the campaign. As mentioned, the UK is the leader in the West, and reaching 10% from the current 7.47% of the population would be a substantial achievement.

Another milestone to watch is hitting the 500,000 jabs/day mark. The government estimates that reaching that pace is necessary for a reopening of the economy in mid-February. 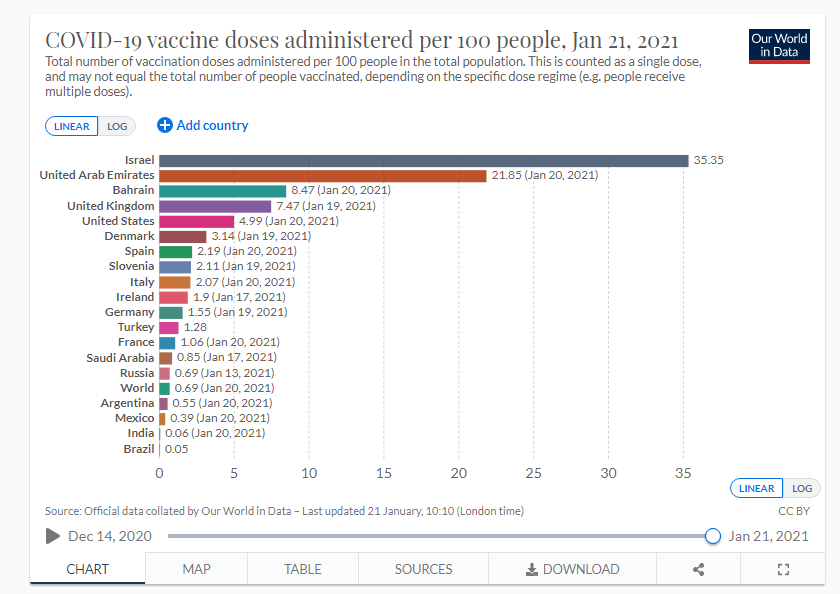 The world is watching Israel, the global leader in the field. So far, the pace of infections has fallen in the small country of nine million, but that may also be attributed to a nationwide lockdown. Studies have shown that the jabs contributed to lower contagion. Still, investors will want to see a drop in hospitalizations and cases to be more confident of the immunization program's success.

The services sector was left out of the Brexit trade deal, and talks on the topic continue at a sluggish pace. It is something traders should keep at the back of their minds.

The jobs report is the main event on the British economic calendar. The Unemployment Rate is projected to have risen above 5% in November, while wage growth has likely moderated. The labor market remains relatively robust thanks to the government's generous furlough scheme.

US events: Can Biden make progress?

The inauguration party is over – is it time to return to bipartisan warfare? While the level of angst is projected to remain far from Donald Trump's days at the White House, Democrats and Republicans are at odds over several topics that will likely impede an easy passage of new stimulus.

Democrats have the narrowest of majorities in the Senate – they depend on Vice-President Kamala Harris's tie-breaking vote as the chamber is split 50-50. To pass major legislation, the president's party needs 60 supporters. Otherwise, Dems would need to use a process called reconciliation, which is limited in scope.

Will Biden go big or go fast? Trying to pass one large relief bill would require long weeks of negotiations and potentially painful compromises, such as aid for states. Conversely, he could go fast by pushing for quick non-controversial topics.

It is unclear how things evolve in these early days, but markets have a clear preference – more and soon. The closer the stimulus is to $1.9 trillion, and the faster it passes, the better. No substantial agreement is likely in the President's first full week in office, but politicians will probably reveal some of their cards.

Coronavirus and vaccine statistics are also eyed but are set to have a smaller effect on the dollar as Britain's statistics have on the pound.

The US economic calendar is packed in the last week of January. Durable Goods Orders for December are set to show an increase of 0.5% in December, and the publication serves as a preview to Thursday's Gross Domestic Product report for the last quarter of the year.

Economists expect a return to reasonable GDP figures – an increase of 4.4% annualized in the last months of 2020 after a leap of 33.4% in the third quarter and a collapse of a similar scale beforehand. There is a high degree of uncertainty. Recent retail sales figures for both November and December have badly disappointed.

Sandwiched between these economic releases, the Federal Reserve announces its first decision of 2021. The Fed will likely leave its policies unchanged but may hint if it is leaning toward tapering its bond-buying scheme or expanding it to fund the stimulus plan.

Like all policymakers, Federal Reserve Chairman Jerome Powell needs to balance the current dire situation of the virus's rapid spread and hopes stemming from the vaccines. Powell's tone may also serve as a hint toward the GDP data, which he may have in advance.

Friday features Personal Spending and Personal Income for December and the final read of Consumer Sentiment Index for January. These releases have the final word of the week. 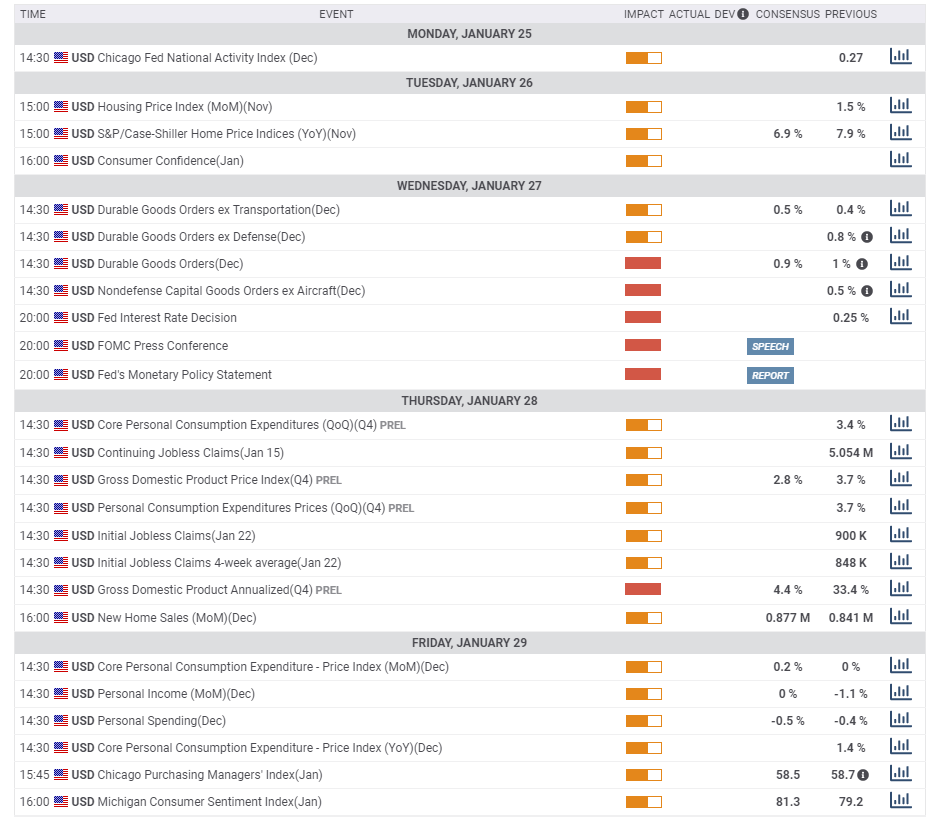 Pound/dollar's daily chart is showing a clear and steady uptrend in recent months, with the pair setting higher highs and higher lows on a regular basis. Cable trades above the 50-day, 100-day and 200-day Simple Moving Averages, benefits from upside momentum – all while the Relative Strength Index remains below 70. GBP/USD is outside overbought conditions and has room to rise.

Even if Biden achieves little in his first week showing, the determination may continue boosting sentiment and pushing lower. The UK's vaccination campaign may hit new highs, supporting the pound. Overall, there is room for more gains.

The FXStreet Forecast Poll is showing that experts are not buying the recent rise above 1.37 and foresee significant falls in all timeframes. The average targets are little changed. 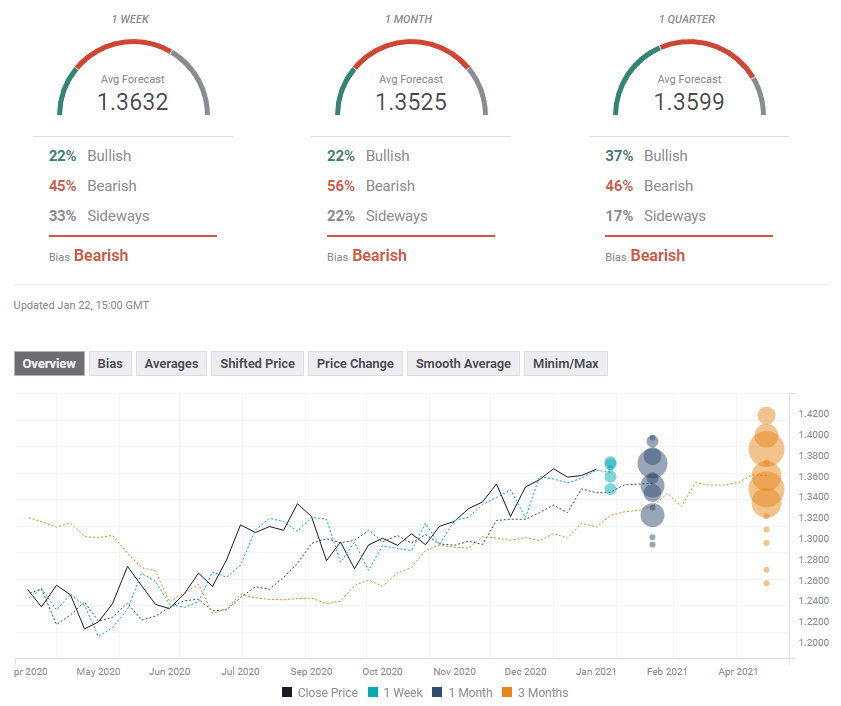