The XAU/USD pair started 2020 a little above $1,500 and climbed all the way up to $1,700 by the end of February. During the first couple of months of the year, the selling pressure surrounding the USD helped the pair gain traction. The dovish shift witnessed in the US Federal Reserve (Fed) monetary policy in the second half of 2019 caused the greenback to weaken against its rivals in early 2020. In July, September and October of 2019, the Fed decided to cut its policy rate, federal funds rate, by 25 basis points in each meeting and lowered it to 1.75% from 2.5%.

However, a dramatic turn of events unfolded when a new virus that originated in Wuhan, Hubei Province, China, started to spread around the world and caused global panic. On December 29, 2019, local hospitals in Hubei reported several pneumonia-like cases of unknown origin and China announced later that a 61-year old man died of a new type of coronavirus on January 11. On March 11, the World Health Organization (WHO) declared this novel coronavirus (COVID-19) outbreak a global pandemic. By mid-December, 2020, there were more than 72 million confirmed cases and 1.6 million coronavirus-related fatalities worldwide.

With countries being forced to shut down their economies and impose curfews to try to slow down the spread of the virus, an intense flight to safety took control of the financial markets and the strong demand for safe-haven US Treasury bonds triggered a sharp decline in the yields. The benchmark 10-year T-bond yield lost nearly 50% in a matter of weeks and touched a record low of 0.36% on March 9.

This situation also caused funding pressures to buildup in the offshore USD markets and provided a boost to the greenback. Reflecting the broad-based USD strength, the US Dollar Index (DXY) surged to its highest level in more than three years at 103 in late March. Around that time, XAU/USD erased all the gains it recorded in January and February and slumped to the 2020-low of $1,450.

However, the Fed acted quickly to address this issue and established swap lines with 14 major central banks while switching the seven-day maturity operations to daily. The DXY retreated to the 98 area in early April and allowed XAU/USD to recover above $1,600.

The global economic crisis caused by the coronavirus obliged major central banks to take drastic measures. In two emergency meetings that took place on March 3 and March 15, the Fed cut its policy rate by a total of 150 basis points to 0%-0.25%. Additionally, the Federal Reserve said that it will buy at least $700 billion under new large scale asset purchases with no upper limit. On April 6, the US central bank introduced three new emergency lending facilities, the Paycheck Protection Program Liquidity Facility (PPPFL), the Main Street Business Lending Program and the Municipal Liquidity Facility. In July, the FOMC decided to extend all the emergency lending programs by three months to the end of 2020.

The European Central Bank (ECB), which had no room to cut rates any further, announced on March 12 that it decided to buy an additional €120 billion under the monthly asset purchases until the end of the year. A week later, the bank launched the €750 billion Pandemic Emergency Purchase Program (PEPP) and expanded the program by another €600 billion to €1,350 billion in June. Finally, the ECB increased the envelope under the PEPP by €500 billion to a total of €1,850 billion and extended the horizon to at least the end of March 2022.

The Bank of England (BoE) reduced its key rate 65 basis points to 0.1% in two meetings that took place in March. Additionally, the BoE expanded its Asset Purchase Facility three separate times and lifted the total amount from £435 billion in February to £895 billion in November.

The unprecedented monetary easing introduced by major central banks kickstarted an impressive rally in the precious metal, which is generally seen as a safe-haven asset that is insulated from inflationary pressures. XAU/USD started April at $1,575 and notched a new all-time high of $2,075 on August 7th, advancing by more than 30% in that four-month period.

XAU/USD went into a consolidation phase below $2,000 toward the end of summer and staged a deep correction in November as the coronavirus vaccine optimism made it difficult for gold to continue to attract investors. On November 9, Pfizer announced that the COVID-19 vaccine which/that has been developed together with BioNTech was more than 90% effective in the phase-3 trials. A week later, Moderna reported that its vaccine candidate showed a 94.5% efficacy. XAU/USD lost more than 5% in November and dropped to its lowest level since early July at $1,764.

However, the improving market sentiment in the last quarter of the year also weighed heavily on the USD and allowed XAU/USD to rebound toward $1,900.

Despite the liquidity flooding the financial markets, inflation outlook in major economies remains subdued and major central banks voiced their commitment to keeping their policies extremely loose until they see a convincing increase in price pressures. This suggests that investors will not give up on gold in the near future.

On the other hand, a return to normality with mass COVID-19 vaccinations could make risk-sensitive assets more attractive, especially in the second half of 2021, and dampen the demand for the yellow metal.

Overall, gold outlook remains bullish with the rate of increase in prices softening when compared to 2020.

XAU/USD news: Key events, data to keep an eye on

Following the last monetary policy meeting of 2020,  Federal Reserve Chairman Jerome Powell noted that they remain open to increasing the size of asset purchases if needed but reiterated that the current policy stance remains appropriate for the time being. Policymakers could opt out to wait and see how the new administration deals with the coronavirus in early 2021 and how impactful the next relief bill will be. Thus, a change in the policy looks rather unlikely in January. The second FOMC meeting of the year will take place on March 16-17 and an adjustment in the size and the duration of the quantitative easing (QE) program could be announced if the labour market and inflation data show no signs of improvement towards the Fed’s targets.

At the Jackson Hole Economic Policy Symposium in August, Powell announced that the American central bank will be targeting average inflation as its new strategy, meaning that they will not act even if inflation rises above 2% and stays there for a while. The Core Personal Consumption Expenditures (PCE) Price Index, the Fed’s preferred gauge of inflation, dropped to 1.4% on a yearly basis in October. The Fed might take a dovish action unless there is a dramatic jump in inflation data and XAU/USD could gather bullish momentum.

In case the Fed keeps the status quo in March, the next policy action is likely to come after June 15-16 or September 21-22 meetings.

On the first Friday of every month, the US Bureau of Labor Statistics will be releasing the employment report. The improvement in the labour market will be closely tied to fiscal support and the coronavirus. State and local governments in the US laid off more than 1 million workers during the crisis and if US lawmakers agree to help those governments, the labour market could show a convincing recovery. Nevertheless, even if upbeat jobs figures trigger a selloff in gold, it could be expected to remain short-lived.

On the weekly chart, the 50% Fibonacci retracement of the uptrend that started in late March and ended in early August seems to have formed strong support at $1,760, which is also enforced by the 100-week SMA. A downward correction in the near-term is likely to have a difficult time breaking below that level. In case that happens, next support could be seen at $1,700 (psychological level/61.8% Fibonacci retracement).

On the monthly chart, the price seems to have recovered above the ascending trend line coming from May 2019, confirming the bullish outlook. If XAU/USD continues to follow that line, a rise above $2,000 could be expected around mid-2021.

Despite everyone being bullish on gold, I think it will drop first before the next wave up. This already happened in the near-term history so my view is very long-term bullish but 2021 bearish or at least until 1550 zone is hit again where I expect the new bounce. 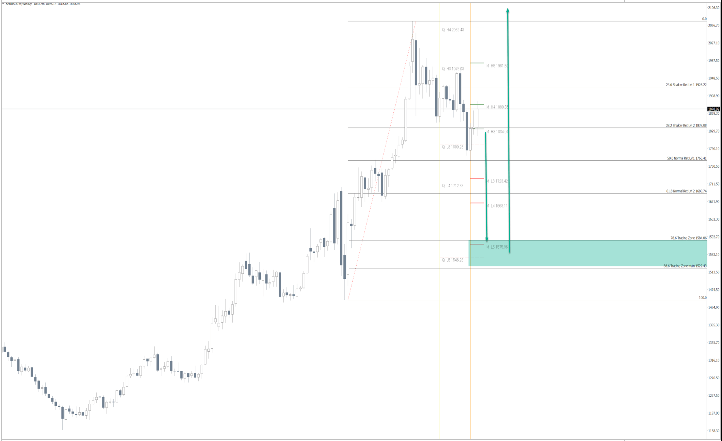 Growing inflation expectations, negative real yields, expectations for a weaker USD and a recovery in physical demand should prove supportive for gold.

Gold has been declining in a channel down pattern since August 10.