2021 will be remembered as the year of inflation’s comeback and gold’s dissatisfying reaction to it. Will gold improve its behavior in 2022?

You thought that 2020 was a terrible year, but we would be back to normal in 2021? Well, we haven’t quite returned to normal. After all, the epidemic is not over, as new strains of coronavirus emerged and spread last year. Actually, in some aspects, 2021 was even worse than 2020. Two years ago, the pandemic was wreaking havoc. Last year, both the pandemic and inflation were raging.

To the great surprise of mainstream economists fixated on aggregate demand, 2021 would be recorded in chronicles as the year of the supply factors revenge and the great return of inflation. For years, the pundits have talked about the death of inflation and mocked anyone who pointed to its risk. Well, he who laughs last, laughs best. However, it’s laughter through inflationary tears.

Given the highest inflation rate since the Great Stagflation, gold prices must have grown a lot, right? Well, not exactly. As the chart below shows, 2021 wasn’t the best year for the yellow metal. Gold lost almost 5% over the last twelve months. Although I correctly predicted that “gold’s performance in 2021 could be worse than last year”, I expected less bearish behavior. 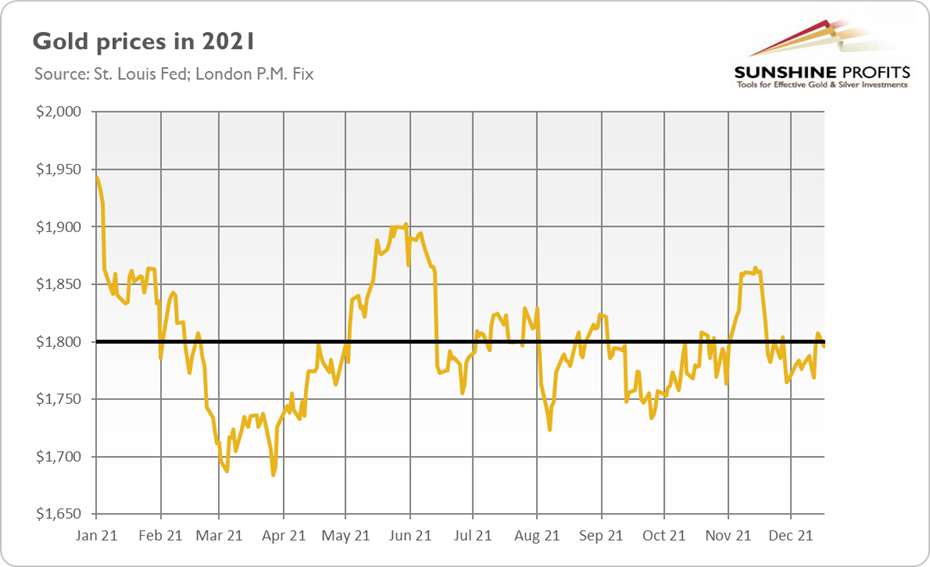 What exactly happened? From a macroeconomic perspective, the economy recovered last year. As vaccination progressed, sanitary restrictions were lifted, and risk appetite returned to the market, which hit safe-haven assets such as gold. What’s more, a rebound in economic activity and rising inflation prompted the Fed to taper its quantitative easing and introduce more hawkish rhetoric, which pushed gold prices down.

As always, there were both ups and downs in the gold market last year. Gold started 2021 with a bang, but began plunging quickly amid Democrats’ success in elections, the Fed more optimistic about the economy, and rising interest rates. The slide lasted until late March, when gold found its bottom of $1,684. This is because inflation started to accelerate at that point, while the Fed was downplaying rising price pressures, gibbering about “transitory inflation”.

The rising worries about high inflation and the perspective of the US central bank staying behind the curve helped gold reach $1,900 once again in early June. However, the hawkish FOMC meeting and dot-plot that came later that month created another powerful bearish wave in the gold market that lasted until the end of September.

Renewed inflationary worries and rising inflation expectations pushed gold to $1,865 in mid-November. However, the Fed announced a tapering of its asset purchases, calming markets once again and regaining investors’ trust in its ability to control inflation. As consequence, gold declined below $1,800 once again and stayed there by the end of the year.

What can we learn from gold’s performance in 2021? First of all, gold is not a perfect inflation hedge, as the chart below shows. I mean here that, yes, gold is sensitive to rising inflation, but a hawkish Fed beats inflation in the gold market. Thus, inflation is positive for gold only if the US central bank stays behind the curve. However, when investors believe that either inflation is temporary or that the Fed will turn more hawkish in response to upward price pressure, gold runs away into the corner. Royal metal, huh? 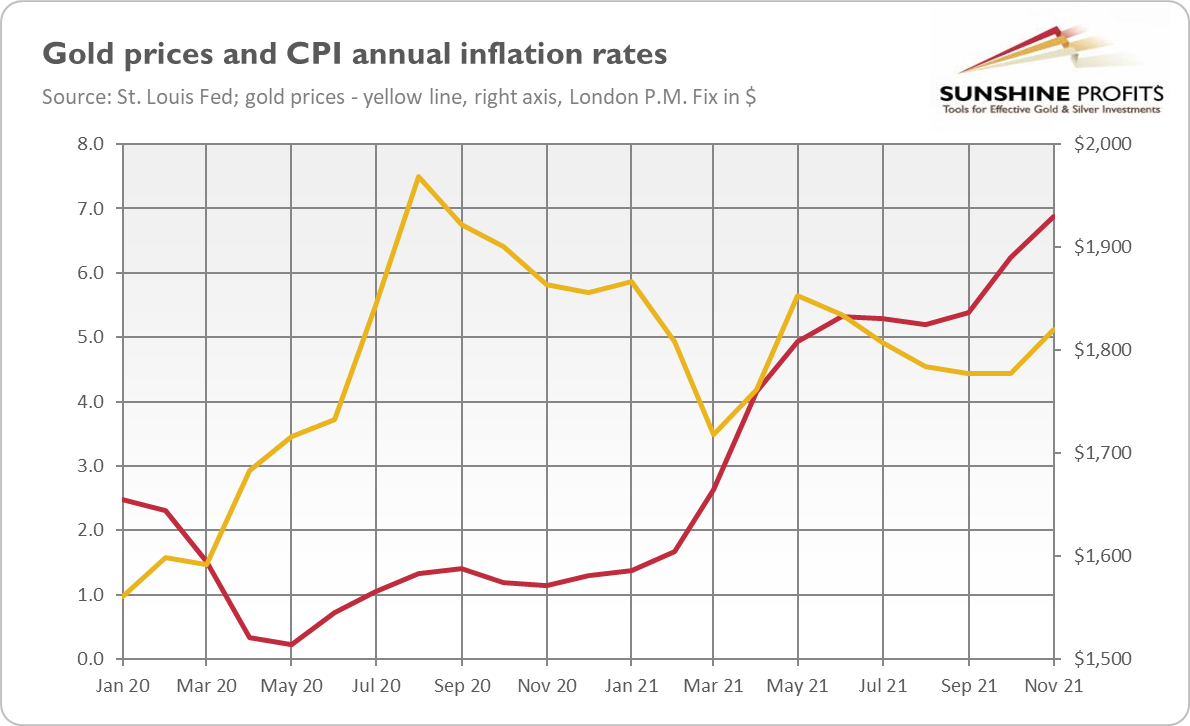 Second, never underestimate the power of the dark… I mean, the hawkish side of the Fed – or simply, don’t fight the Fed. It turned out that the prospects of a very gradual asset tapering and tightening cycle were enough to intimidate gold.

Third, real interest rates remain the key driver for gold prices. As one can see in the chart below, gold plunged each time bond yields rallied, in particular in February 2021, but also in June or November. Hence, gold positively reacts to inflation as long as inflation translates into lower real interest rates. However, if other factors – such as expectations of a more hawkish Fed – come into play and outweigh inflation, gold suffers. 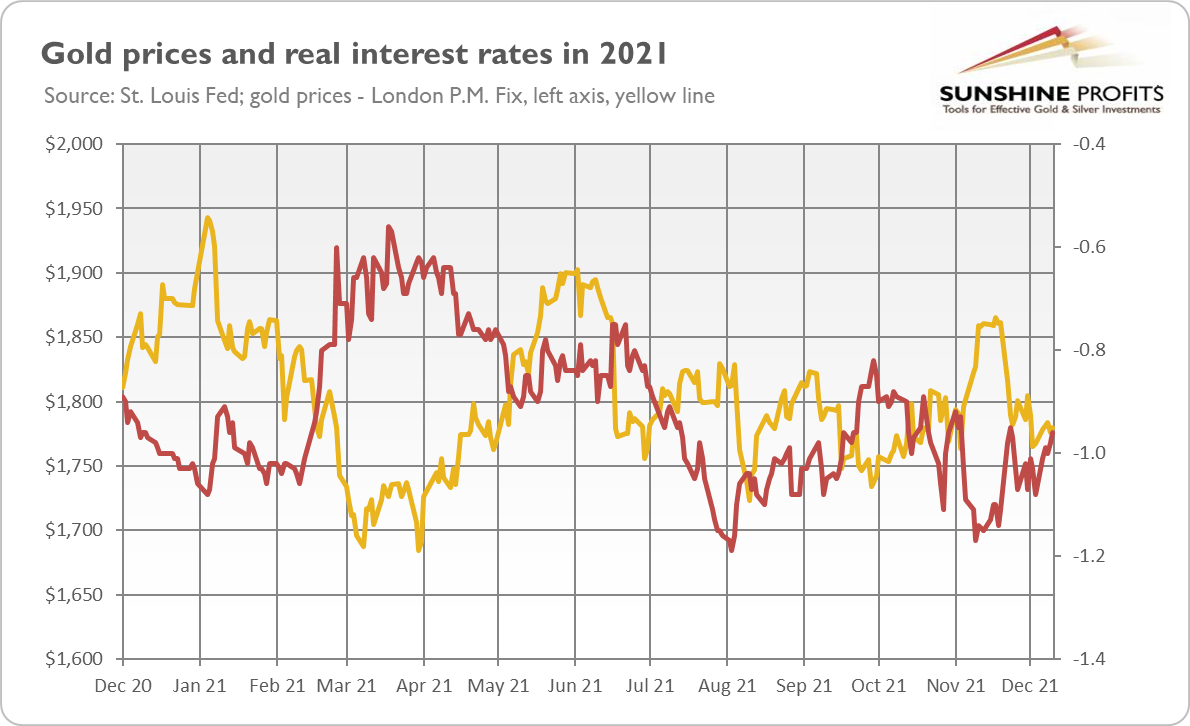 Great, we already know that 2021 sucked and why. However, will 2022 be better for the gold market? Although I have great sympathy for the gold bulls, I don’t have good news for them.

It seems that gold’s struggle will continue this year, at least in the first months of 2022, as the Fed’s hiking cycle and rising bond yields would create downward pressure on gold. However, when the US central bank starts raising the federal funds rate, gold may find its bottom, as it did in December 2015, and begin to rally again.