Growth in global trade has slowed for five consecutive years.

Trade growth for 2016 was under 2%. That’s something that has happened only three times since 2000. On both prior occasions, the US was in recession.

Please consider a couple of snips and a few charts from the 24-page PDF, Trade Developments in 2016: Policy Uncertainty Weighs on World Trade

2016 is the fifth consecutive year of sluggish trade growth and the year with the weakest trade performance since the aftermath of the 2008 global financial crisis. Current estimates of growth in the volumes of trade in goods and services range from 1.9 percent to 2.5 percent; preliminary high-frequency data suggest that merchandise trade volumes may have grown by slightly above 1 percent. The year 2016 is different from the other post-crisis years, in that trade sluggishness is a characteristic of both advanced and emerging economies.

Trade developments in 2016 continued to reflect enduring structural determinants, such as the maturing of global value chains (GVCs) and the slower pace of trade liberalization, as well as cyclical factors, notably slow global growth, the trough in commodity prices, and macroeconomic rebalancing in China. The increase in policy uncertainty may account for up to 75 percent of the worsening of the trade slowdown in 2016. 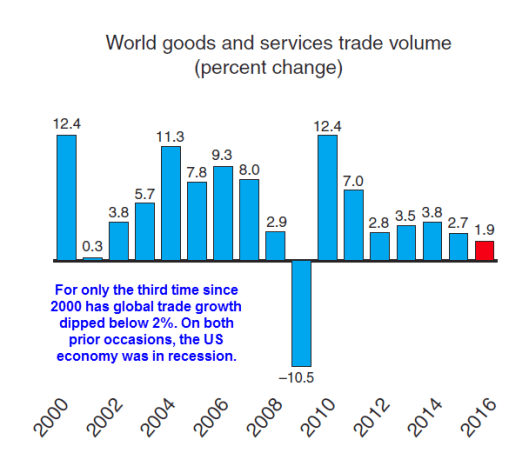 For only the third time since 2000 has global trade growth dipped below 2%. On both prior occasions, the US economy was in recession. 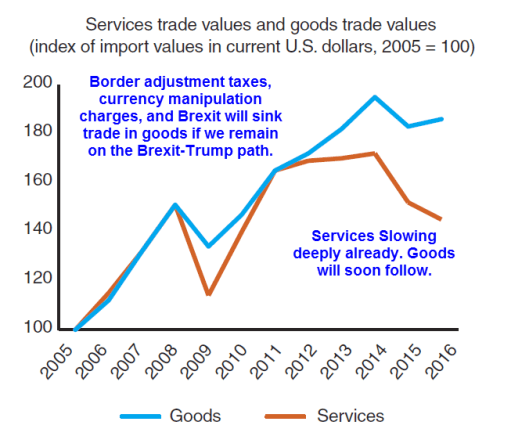 The above chart is ominous.

Border adjustment taxes, currency manipulation charges, and Brexit will sink trade in goods if we remain on the Brexit-Trump path. 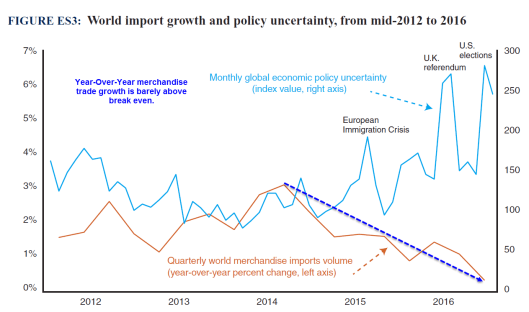 Year-over-year merchandise trade growth is barely above break even. 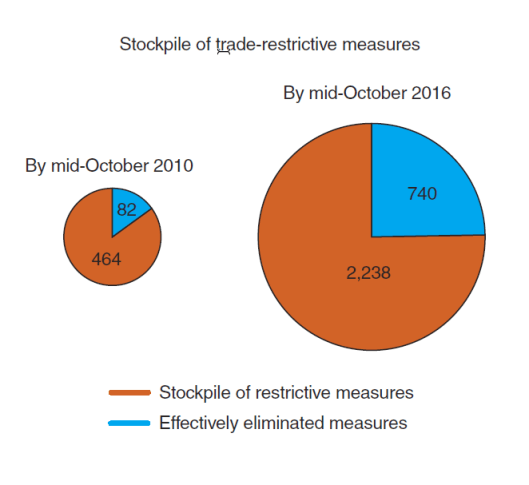 I suggest that is a bunch of nonsense.

The chart labeled “Global Trade Goods vs. Services” shows services have been in decline since 2014 while merchandise continued to grow.

There is no reasonable way to blame a decline in services but not merchandise on political uncertainty.

It is not “certain’ what Trump will do, or how Brexit will evolve.

Unfortunately, the forces in play over Brexit and Trump-inspired trade policies suggest a global trade disaster is “nearly certain” to happen.