The blue wave is coming – both Democratic candidates are on course to win special runoff elections in Georgia, after around 97% of the votes have been counted. That would result in an even 50-50 split in the upper chamber of Congress, with Vice-President-elect Kamala Harris breaking ties.

At the time of writing, Democratic candidate Raphael Warnock has already been declared the winner by the networks. He is up by 0.96% against Republican Senator Kelly Loeffler. The second race is closer, with GOP Senator David Perdue trailing Democratic challenger Jon Ossof by 0.08%. 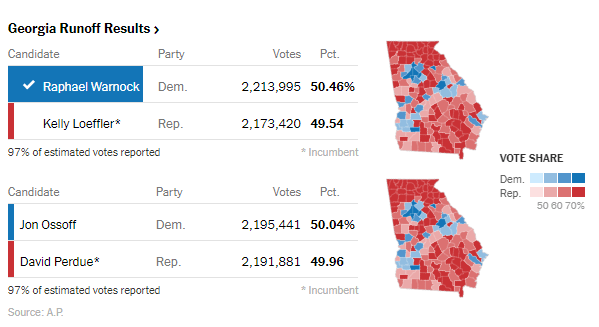 Why are both candidates set to win with such small margins? The reasoning lies with the remaining votes. The tally from Chatham and other Democratic-leaning counties has yet to be counted and is due in the US morning. So far, turnout was higher in Dem strongholds and lower in Republican ones.

Officials in the Peach State expect clear results at around noon local time, 17:00 GMT, and final results only on Friday, when overseas ballots are counted, but they are unlikely to change the picture,

Both GOP Senators are unlikely to concede. Loeffler has joined President Donald Trump's unsubstantiated claims of fraud – probably hurting her chances – and will likely refuse to admit defeat. Perdue – the only candidate of four that won a previous election, Loeffler was nominated – may opt to wait for a recount if the gap remains below 0.5%.

The imminent dual Democratic victory is Goldilocks for investors. On the one hand, President-elect Joe Biden would have an easy path to pass additional relief packages from boosting the distribution of vaccines to ramping up America's infrastructure. On the other hand, the thinnest of Senate majorities will likely be unable to enact sweeping market-unfriendly reforms.

The safe-haven dollar will likely remain under pressure, but the road is not straightforward. The prospects of vast spending – well beyond the recent $900 billion injection – means higher US debt. In turn, yields have already surpassed the 1% level and may continue higher.

Will the Federal Reserve jump in and buy more bonds? That could keep the greenback to the ground. However, if such a move fails to materialize quickly, the dollar's slide could be moderate.