Here we are in the last quarter of the year, and the two major issues that began 2019 for GBPNZD remain firmly in place. GBP is still dominated by Brexit. At time of writing, it is still not clear whether Britain is leaving Europe with or without a deal. What is certain is that the after effects of Brexit will continue to dominate the pair during the final quarter of the year. In much the same way, the fortunes of NZD will continue to be closely linked with the progress of the ongoing US-China trade talks.

In the last three months, the Pound has had much the better of the exchange, rising from 1.838 since August 2019 in mid-market rates against the New Zealand Dollar to reach 1.997 in September, a hair’s breadth from touching 2.00. The last time it was that high was a year ago. Whether the Pound can reach those heights again will depend much on whether UK Prime Minster Boris Johnson can reach an agreement with the European Union before the 31st October leaving date.

If, in the end, a hard Brexit goes ahead, then the way the economy performs will be crucial, combined with how quickly Britain can reach trade deals with major countries and how competitive the agreements are. As always, stay in touch with your Halo Financial currency consultant for the latest news and guidance.

With the United States and China meeting to discuss trade, the pundits have gone into overdrive. Predictions abound, first, that a deal is imminent… then, that the dispute will linger on into 2020. Basically, no-one knows. And confidence and optimism that an agreement will be reached, like Brexit, is falling. What is clear is that if the Chinese economy suffers as a result, the New Zealand economy will also follow and the Kiwi is likely to weaken against the Pound and other major pairings.

Central banks across the globe are worried about the effects of the trade war and it is clear that the global economy is taking a hit. In the last year, the United States had added tariffs to US$360billion of Chinese goods and has threatened to step that up even more by the end of the year and tax most imports from China. In turn, China has added tariffs to around $110 billion of United States products.

The two sides are due to meet in Washington DC in October and with both sides making minor goodwill concessions ahead of the meeting, some are optimistic that there can be an agreement reached. But if little progress is reached, or the talks drag on for some time, the markets will react.

No change in interest rates

On 25th September, the Reserve Bank of New Zealand (RBNZ) left its Official Cash Rate (OCR) at 1%. It admitted business confidence was low and global trade tensions remained. Although it said low inflation and growth rates meant, New Zealand interest rates could be expected to be low for longer, there was not enough change to immediately lower the rate. “Keeping the OCR at low levels is needed to ensure inflation increases to the mid-point of the target range, and employment remains around its maximum sustainable level. There remains scope for more fiscal and monetary stimulus, if necessary, to support the economy and maintain our inflation and employment objectives.”

Both the UK and New Zealand are experiencing slowing economies and forecasts. In the UK for Quarter 2, there was a 0.2% fall in output, compared to a 0.5% rise from January-March 2019. But in July 2019, there was a small boost of 0.3% in GDP - three time higher than expectations. The result was supported by a 0.5% rise in construction and 0.3% in manufacturing. But due to uncertainty caused by Brexit and the US-China trade wars, the British Chambers of Commerce (BCC) has lowered growth expectations for 2019 by 0.1% to 1.2% and for 2020 by 0.2% to 0.8%.

UK business investment is also predicted to fall 1.5% in 2019 and 0.1% in 2020. Add this to the 0.4% decline from 2018 and it is the longest period of sustained full-year declines in business investment for 17 years.  Britain’s property market is also at a seven-year low, according to the latest figures from the Office of National Statistics. The average price rose by just 0.7% year-on-year in July. At the same time, values dropped in London, the South East of England, the East and the North East. However, inflation has fallen back within the Bank of England’s target range, dropping from 2.1% in July to 1.7% in August 2019. New Zealand’s Quarter 2, 2019, financial results showed its economy grew by 2.1% a year on a seasonally adjusted basis in the three months to June. This is the weakest performance for five and a half years – but still ahead of the UK.

From April-June, Gross Domestic Product grew by 0.5%, says Stats NZ. Service and primary industries increased by 0.7%. The main drivers of growth in services industries include rental, hiring, and real estate services (up 1%); transport, postal, and warehousing services (up 1.8%); arts, recreation, and other services (up 2.8%); and public administration, safety, and defence (up 1.8%). Activity in goods-producing industries fell 0.2%, following 1.9% growth in the March 2019 quarter. This was largely driven by a 0,8% decline in manufacturing.

Construction also fell this quarter by 0.8%, following two consecutive quarters of strong growth. Strong 3.1% growth in electricity, gas, water, and waste services partially offset these falls. Three service industries were lower – health care and social assistance (down 0.2%); information media and telecommunications (down 0.1%). Professional, scientific, tech, admin, and support services were static. However, the good news was that the size of the economy broke $300 billion for the first time.

Kiwi in the top 10 traded currencies

The New Zealand Dollar is still among the top 10 traded currencies around the world, according to a survey from the Bank for International Settlements (BIS). In fairness, the result was no surprise, as the Kiwi has been in 10th place since 2010. The survey, which is held every three years, involved central banks and other authorities in 53 jurisdictions, plus almost 1300 banks and other dealers.
Reserve Bank Assistant Governor and General Manager of Economics, Financial Markets and Banking, Christian Hawkesby, says New Zealand has had a high FX turnover to GDP ratio throughout history. This means non-residents freely trade directly in the currency.

“The BIS survey is an interesting exercise which highlights that although our economy is relatively minor compared to the survey participants we are ranked against, the NZ Dollar is traded with a disproportionate frequency in global FX markets.”

Into October and still no decision on Brexit

Well, here we are into October – and there is still no decision over Brexit and when and under what conditions Britain will leave the European Union. The Pound is under pressure against the Kiwi due to the continuing uncertainty over what will happen and how the economy will be affected. New UK Prime Minister, Boris Johnson took over as UK Prime Minister in late July and immediately suspended Parliament. However, that was subsequently ruled as unlawful by the courts.

Mr Johnson then removed the Tory whip from 21 MPs for voting against the government on Brexit and along with a few defections, the Conservatives lost their working majority. This has resulted in the government losing all the key parliamentary votes it has fought under Mr Johnson. But his determination to take Britain out of the EU by 31st October come what may has won over Leave voters, which has seen the Conservatives climb above second-placed Labour in the polls by around 12% in late September. Knowing he has substantial lead, Mr Johnson has sought to call an early general election several times, but has been prevented by MPs.

The opposition say that even if there was an election, it would not happen soon enough to prevent Britain leaving the UK, if that was the way the results went. So, Parliament has been recalled – amid the Conservative Party Conference – and Remain MPs are attempting to hatch a plan to avoid a no-deal Brexit and the government is trying to leave the EU come 31st October, with or without a deal.

Break on through to the other side?

GBPNZD traded up to 2.00 a few weeks back for the second time this year – as in the May rally, the Pound has failed to close above 2.00 and over the last fortnight has corrected lower. It has traded down to 1.9300, which looks like it will hold and possibly bounce back from there (notwithstanding the usual caveat about uncertainty over Brexit and sudden news leaks).
Depending on how Brexit develops in the run up to the EU Summit next week and thereafter the 31st October deadline (which looks certain to be extended… for how long is yet to be confirmed… ), will influence the direction the Pound takes.

Expect more volatility from the Pound, as the Brexit leaving date approaches. If no agreement can be reached, the UK economy is likely to be affected, and Sterling will come under more pressure. The touchpoint for NZD up until the end of the year will be the US-China trade war and how the Chinese economy performs and whether the record trade with New Zealand begins to tail off. As always, if you are exchanging GBP or NZD, talk to your Halo Financial Currency Consultant.

Buyers could target 1.9800 at the top of the range, or longer-term, wait for that unicorn to break up through 2.00!

Sellers could convert a portion here and more if the selloff in GBP continues, with downside targets of 1.9250 and then onto 1.86. 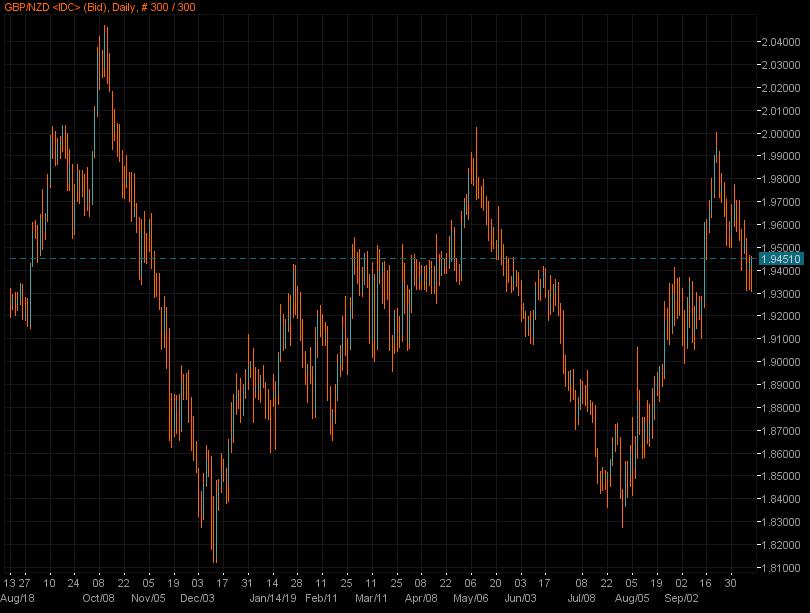