After dropping to its lowest level since November 2020 at 1.2974 earlier in the week, GBP/USD has managed to stage a rebound. Although the broad-based dollar strength didn’t allow GBP/USD to gather further bullish momentum in the second half of the week, the pair ended up closing above 1.3050 to snap a two-week losing streak.

The risk-averse market environment and rising US Treasury bond yields helped the greenback outperform its rivals at the beginning of the week.

On Tuesday, the US Bureau of Labor Statistics reported that annual inflation in the US, as measured by the Consumer Price Index (CPI), jumped to a fresh four-decade high of 8.5% in March from 7.9% in February. Further details of the report revealed that the Core CPI, which excludes volatile food and energy prices, edged higher to 6.5% from 6.4% in the same period, compared to the market expectation of 6.6%. Although the initial market reaction to the US inflation report caused the dollar to lose some interest, hawkish Fed commentary triggered a rally in US T-bond yields late Tuesday.

Fed Vice Chair Lael Brainard said that reductions in the balance sheet could come as soon as June after a decision is finalized at the May policy meeting. Additionally, Richmond Fed President Thomas Barkin argued that interest rates should be moved rapidly to neutral.

The UK’s Office for National Statistics (ONS) announced on Tuesday that the ILO Unemployment Rate in February edged lower to 3.8% from 3.9% but this reading failed to trigger a noticeable market reaction. On Wednesday, the ONS’ monthly publication revealed that the annual CPI in the UK climbed to 7% in March from 6.2% in February, surpassing analysts’ estimate of 6.7%. Regardless of the hot UK inflation data, GBP/USD struggled to gain traction until the dollar came under heavy selling pressure amid slumping US yields during the American trading hours on Wednesday.

After rising more than 100 pips on Wednesday, GBP/USD extended its recovery to a fresh nine-day high of 1.3150 in the early European session on Thursday. With the European Central Bank (ECB) leaving its policy settings unchanged, however, the greenback regathered its strength and forced GBP/USD to turn south.

Nevertheless, the sharp decline witnessed in EUR/GBP following the ECB event suggested that the British pound was able to capture some of the outflows out of the euro. Hence, GBP/USD stabilized above 1.3050 on Easter Friday and registered modest gains for the week.

The economic calendar will not be offering any high-tier data releases in the first half of the week that could impact GBP/USD’s action in a significant way.

The US Federal Reserve will release its Beige Book on Wednesday and the UK’s ONS will publish March Retail Sales data for the UK on Friday, which is expected to show a monthly contraction of 0.3%.

Finally, the S&P Global’s preliminary April Manufacturing and Services PMI reports for both the UK and the US will be looked upon for fresh impetus ahead of the weekend. In case these data highlight that the business activity in the US private continues to expand at a more robust pace in April than in the UK, GBP/USD is likely to stay on the back foot and vice versa.

The Bank of England (BOE) is facing a tougher balancing act than the US Federal Reserve with regard to policy tightening. Both central banks look to battle inflation but the BOE is growing increasingly concerned over the uncertainty surrounding the growth outlook in the face of a protracted Russia-Ukraine conflict. On Thursday, FOMC Chairman Jerome Powell will speak at "The International Monetary Fund Debate on the Global Economy."

The fundamental outlook suggests that GBP/USD is likely to find it difficult to stage a steady recovery at least until markets are convinced of the BOE’s willingness to adopt a more aggressive tightening stance.

On the other hand, GBP/USD’s losses could stay limited in the near term as the British pound still remains a better alternative than the euro and the Japanese yen. 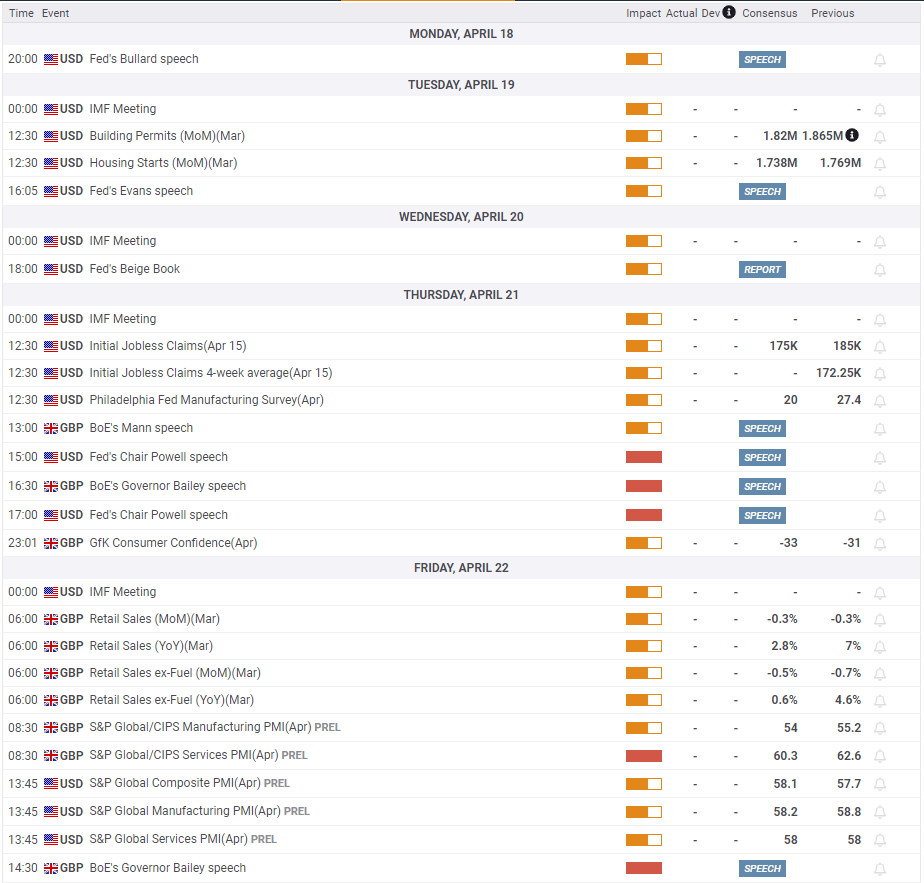 The Relative Strength Index on the daily chart stays below 50. Additionally, GBP/USD failed to close the day above the 20-day SMA on Wednesday despite the impressive recovery, highlighting bears' dominance in the near term.

Nevertheless, 1.3000 (psychological level, static level) aligns as strong support and sellers could see a decline toward that level as an opportunity to book their profits. In case fundamental drivers continue to weigh on GBP/USD and force a daily close below that level, the next bearish targets could be seen at 1.2920 (static level) and 1.2750 (static level).