The single biggest question this week is whether Fed chief Yellen is going to get away with repeating that inflation and inflation expectations are almost irrelevant—the Fed is going to hike again this year on the thesis that full employment means inflation somewhere in the pipeline, even if we can't see it yet.

The fixed income market isn't buying it, hence yesterday's lowest 10-year yield since last November. As for normalization being the goal, a structural story rather than a cyclical one, the bond boys are blowing a raspberry at that one, too.

Two curious things about the FX market that seem perverse, even to old-timers. First, the dollar contin-ues to thrive against the yen and Swiss franc, the two lowest-yielding currencies. The dollar rose to a three- week high against the yen overnight, nearly to the high at 112.13 from May 22. In other words, traders in dollar/yen are impressed by the "hawkish" tone of the Fed and its resolve to keep hiking, while euro/dollar traders are focused more on the potential for tapering in the eurozone.

Two sub-points: The BoJ has recently been saying it's premature to talk about any reduction in QE. This deepens the contrast with the Fed and potentially widens the differential. But notice the red re-sistance line. Also, the "dollar" is not a single thing. We refer to the dollar index as a proxy, and the euro makes up 57% of the dollar index, but the yen is only 13.6%. So the dollar can be soft against the euro, dragging the whole index down, while thriving against the yen.

The second perverse thing is the dominance of central bankers. You'd think the economic fundamentals would drive analysis, whether trade balances, purchasing manager indices, employment, or plain old GDP growth. And it's true that all these factors and more are determinative. But what is decisive can be as small as a single word from an important central banker.

Think about the ECB chairman Trichet uttering the word "brutal" and causing the euro to top out and fall like a rock. Remember Draghi's "whatever it takes" during the Spanish financial crisis and the euro recovering immediately. This time it seems that The Word is "transitory," referring to low inflation. Did Draghi and Yellen have a private phone conversation or is their use of the same word a coinci-dence? It probably doesn't matter—both are economists and both are taking the same view of inflation. Inflation is an evil thing and can never be counted out. Central banks must be perpetually vigilant against inflation. Inflation is like a fungus that can spread from a limb to the heart of an economy. A little might be acceptable but you can never take your eyes off it.

Each central bank has a different starting point. The US recovery is far more advanced than the Europe-an one, and major differences remain. The biggest US banks just passed the Fed's stress tests while a few weeks ago a Spanish bank failed and just this week two Italian banks had to be bailed out. Greece's bailout is still not settled.

But more importantly, Europe (or at least Germany) has far more momentum than the US, as we saw in yesterday's IFO data. So, the FX traders are not looking at a static comparison of the two economies, but rather the rate of change in each economy. US yields seem to have little or no reason to rise back to the previous highs around 2.62%. They may not fall much more, but they are not rising. In contrast, European yields have nowhere to go but up. A single word from Draghi today, "transitory," drove yields up not only in the Bund, but elsewhere in Europe, too. So rising European yields are the latest shiny thing that traders can see. Granted, it hasn't happened in full, yet. But traders buy on the rumor, far in advance of conditions materializing.

And along those lines, two additions to our data set. First, the Atlanta Fed GDPNow forecast yesterday foresees Q2 GDP at 2.9%, the same as last week, based on components of the durables and housing data. Notice how the Atlanta Fed forecast and the blue chip forecast are converging. We may complain that the US is getting or seems to be getting far higher growth than Europe, where the full year forecast is 1.9%. But again, Europe has upward momentum and the US does not. 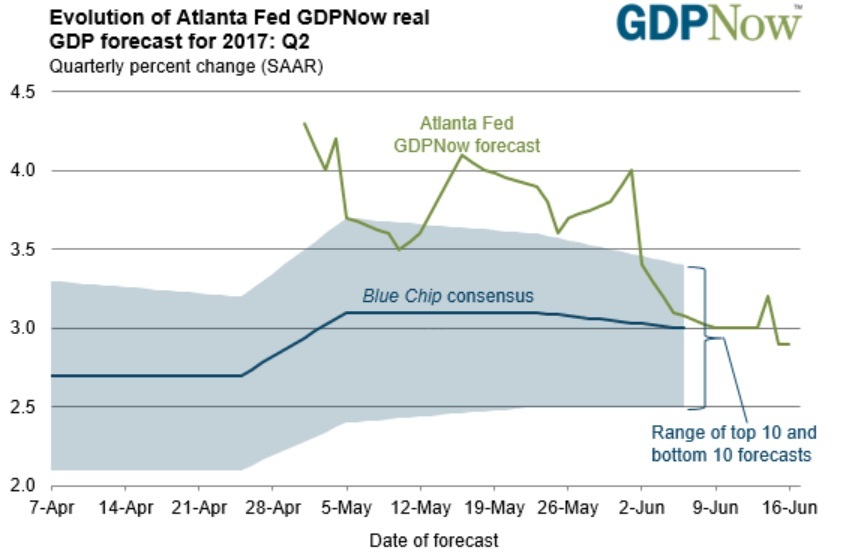 Secondly, whether we should be looking at a single tenor yield differential or the comparative yield curves, there is a sense that the US 10-year is not going up (in the absence of inflation) while the Bund yield may well be going up ahead of the ECB policy meetings in Sept or Oct at which the committee will finally talk about tapering—and Mr. Draghi will admit it.

Draghi confirming taper talk is the one of the most long-awaited bombshells in recent years. Is it still a bombshell when everyone expects it? Yes.

The WSJ has a hilarious story on how bond analysts have misjudged futures yields by about 60 bp—for the past 15 years. See the Deutsche Bank chart. 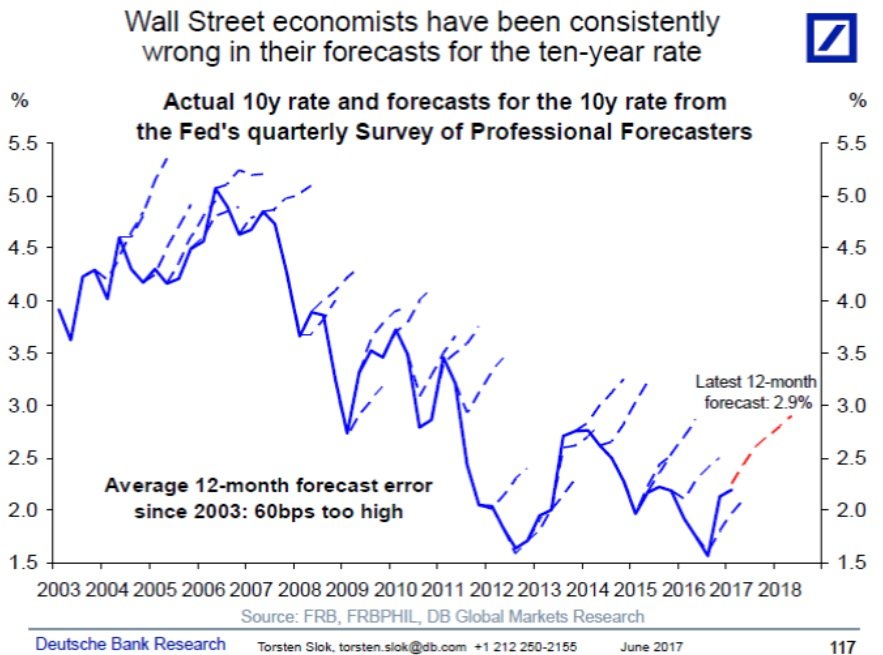 Bottom line, let's return to Rocky's Rule 3—when in doubt, sell the dollar. And Rule 4, when the mar-ket is in doubt, it turns to crosses, like the euro/yen. As noted above, the charts are devilishly hard to read these days. Normally reliable indicators are not reliable this time out. Even the usual two steps forward, one step back pattern is not reliable.

And we have been here before, many times. Chart-reading fails. Fundamental analysis fails. The right answer lies in big trader positioning and since we don't have volume in FX to guide us, we are stuck trying to read the mind of the market. Mind-reading is notoriously difficult. We get seemingly irrational outcomes, such as the time the euro tanked on the Madrid train bombing but then recovered stronger than before only a few days later—for no reason anyone could name at the time. We have to fall back on the entirely unsatisfactory "sentiment bias."

That brings us to perception of the US today. It's not unfair to say nearly the entire world, financial managers not excepted, perceive Trump as an unqualified, unfit jackass. On top of all the other reasons to eschew the dollar, including already having too many of them, Trump is like a last straw. If he had gone for infrastructure rebuilding, something all parties could agree on, the bias could easily have shift-ed to a more favorable tone. Instead we got a tax cut for the rich, which has never trickled down and will not trickle down this time, either. The Dems may be tiresome and whiny, but they are right when they say it's not a health care bill up for the vote this week, it's a tax cut bill. And everyone knows it, and everyone knows it's damaging to the US economy. Europe may still have its sclerotic features, like favoring pan-European multinationals over small domestic businesses, but it's not as loony tunes as the US.

Bottom line, we have the seemingly perverse situation where the currency whose central bank is re-solved to hike rates is falling, while the currency where the central bank may, possibly, be just an-nouncing an end to extraordinary accommodation in a few months is rising. The yield differential is of no help in this situation. What counts is the rate of change or momentum of the first yield being flat while the second one is steepening. And never mind that both actions are, to date, imaginary.

Note to Readers: RTS has launched a Trade Copier service. We place our trades from the Afternoon Traders' Advisory in the retail spot market and your MT4 account mirrors the trades taken in the RTS account. You don't have to lift a finger. You get to pick how much leverage and exactly which curren-cies you want to include. If you are interested, please contact Paul Harris at pjh@rts-forex.com or visit http://www.rtsforex.com/trade-copier/.