Reader Lars writes Debt-to-GDP ratios understate the true nature of the problem. He uses Greece as an example.

Reader Lars from Oslo, the capital of Norway, and a long-time reader of this blog, questions the widespread use of debt-to-GDP as the true measure of the debt problems of a country.

As we approach the next debt crisis it's time to ask some questions.

The widespread measurement of the debt problems of a country is DEBT as a percentage of GDP.

Few analysts question this ratio. But this is how I see things.

However, only the Private Sector pays taxes and that is what enables debt service. In fact, the private sector must service its own debt as well as that of the public sector.

Thus, a better metric to measure debt levels is private sector GDP as reflected in tax income. This tells us the true brutal story of the debt problem.

Using Greece as an example, the real public debt is over 300% of GDP. Given that Greece's private sector is less than 50% of GDP, the brutal reality is that Greece has a debt level which is over 600% of Private Sector GDP.

The Greek state takes in around €65 billions in tax. This is approximately 10% of total debts.

During the previous Greek debt crisis, economists noted that Greek debt was less than 2% of global debt.

In the US, the US federal tax intake is around $3.7 trillion. Total debt is $21 trillion plus off balance sheet items minus inner governmental debt.

If we start to measure debt against the income of the individuals that will service this debt, we get a more correct picture of the challenges today.

We are fooling ourselves with this Keynesian debt-to-GDP measurement.

I questioned Lars about Greek debt.

I created the feature chart from a download from Trading Economics and that shows Greece's debt-to GDP ratio at about 175%.

The Greek Clock Debt shows national debt at €344 billion, a Target 2 balance of about €48 billion, loans to the private sector of €87 billion, and debt to the EU of €50 billion.

Hidden debt in special purpose vehicles (SPVs) makes the total an unknown amount higher, but the number is over €500 billion.

My main point is that the debt level is high and if you measure debt against the income of those who will service that debt, the problem is enormous.

Debt, and the ability to service it, is the problem.

Lars added this thought "Most people suggest the debt will never be repaid so it does not matter. But debt has to be serviced and rolled over. At what price? Slightly higher rates will kill most borrowers. Greece survives only because of subsidized rates."

Raising the interest rate will not help the problem, yet keeping rates low only encourages more eventually unserviceable debt.

In case you did not notice, the ECB's dilemma with Italy and Greece is even worse than the problem the Fed faces. 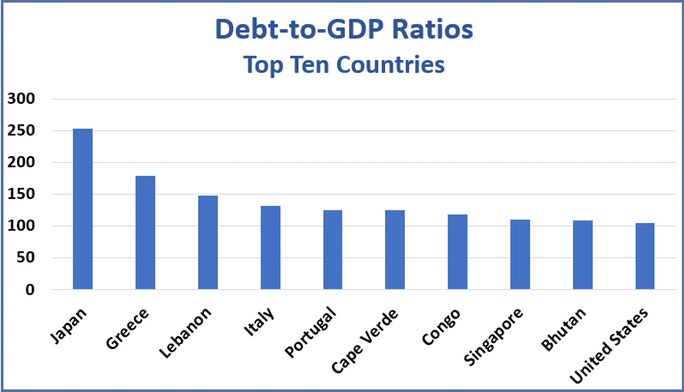