Federal Reserve Chair Jerome Powell did his best to sound equivocal on the US economy, inflation and interest rates, but markets were having none, or at least very little, of it.

New economic projections from the central bank have substantially raised its expectations for inflation and growth this year and have brought a possible rate hike forward into 2022.

Markets reacted immediately even though some improvement in the projections had been widely expected.

The dollar rose against all the majors as US Treasury rates jumped sharply higher. All three main US equity indexes fell because the prospect of rising interest rates has moved considerably closer.

However, despite repeated questioning from reporters Mr. Powell gave no indication when the bank might begin to pull back on its $120 billion a month in bond purchases. He even used the phrase from the April press conference, “substantial further progress” to describe the conditions for a bond taper.

In April the phrase had been deployed to avoid discussing the details of the US economy, on Wednesday it seemed almost an afterthought.

Unlike the April meeting, Mr. Powell went into specifics about the bank’s thinking on inflation, the labor market, product and material shortages, and the difficulty of forecasting in this highly unusual economic situation.

Mr. Powell mentioned several times the possibility that inflation might be stronger and more persistent than the bank had expected. This is somewhat at odds with the meeting statement and the many assertions of Fed officials. He also tried to play down the inflation and rate implications for rate hikes, saying that, “lift-off is well into the future.”

He acknowledged that officials discussed the taper issue at this meeting.

As universally expected, the Federal Open Market Committee (FOMC), the policy body of the central bank, left the fed funds target range at 0.0% to 0.25%, where it has been since March 2020.

In the second set of economic projections this year, the governors' new inflation and interest rate estimates were the opposite sides of the same coin.

Headline PCE inflation at the end of 2021 rose one percentage point to 3.4%. The core PCE rate that the Fed targets at 2%, rose to 3% from 2.2%. The Consumer Price Index (CPI) an older version of the overall PCE index, has almost doubled since the March forecasts, from 2.6% to 5%.

In a major change, the estimate for the fed funds rate at the end of 2023, which had been unaltered in March at 0.1%, moved to 0.6%. Federal Reserve rate increases normally come in increments of 0.25%, implying two increases that year.

In the so-called dot plot, which charts the individual projections of the FOMC participants, all 18 individual estimates, saw rates unchanged this year. In 2022, 11 members had rates unchanged, five predicted one hike, and two suggested two rate increases. For 2023 only five had rates stable, two members have one hike and three each had two, three and four increases. 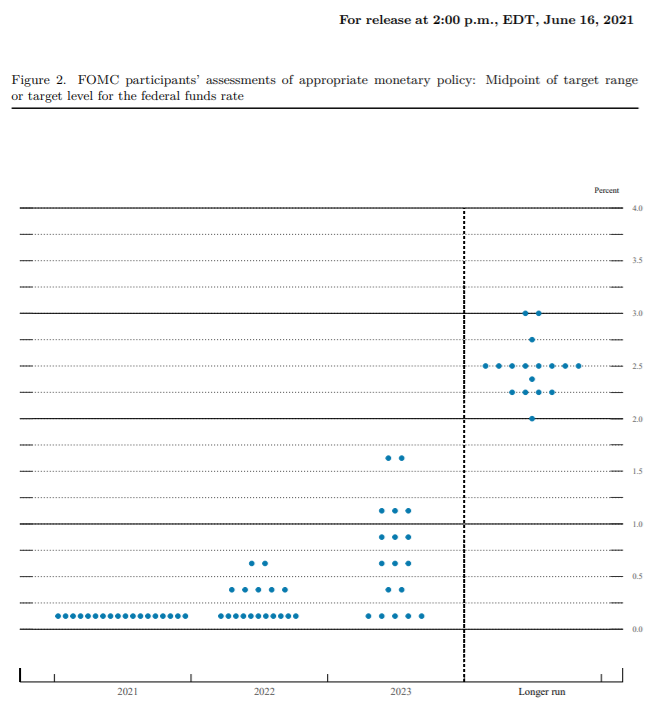 The euro dropped almost 75 points in the first 15 minutes after the 2:00 pm release, falling to 1.2043. It continued lower throughout  Mr. Powell’s press conference, which lasted an hour until 3:30 pm, closing at 1.1995. It was the lowest finish for the united currency against the dollar since April 16.

The US dollar rose in all its major pairs. The USD/CAD closed at 1.2277, its highest finish since May 4.

Treasury yields climbed from the moment of the release. The 10-year return added 7 basis points to 1.569%. The 2-year Treasury yield added 4 basis points to 0.201%. This was the first close for this short-term benchmark above 0.2% in more than a year. The Fed’s bond purchase program has been focused on the short end of the yield curve and has kept this rate nearly stationary for more than 12 months.

The Fed’s new economic projections spoke for themselves. Chair Powell did not try to convince the markets otherwise.

The timing of a policy shift remains imprecise, but it has moved substantially closer. Treasury rates will move higher as the US economy expands, bringing the dollar along. Equitiy traders will have to decide whether the exceptionally strong US economic growth warrants higher stock prices. The initial look at company profits says its will.

American statistics will now be interpreted in light of the Fed’s acknowledgement. The economic corner on the pandemic has been officially turned.

EUR/USD clings to 1.18 as markets digest US data

EUR/USD is battling the 1.18 level after US Retail Sales beat estimates but came on top of a downward revision. Consumer sentiment missed expectations but inflation expectations advanced. Covid headlines are also eyed.

GBP/USD pressured around 1.38 after mixed US data

GBP/USD is trading around 1.38 down on the day after US Retail Sales beat estimates but consumer sentiment missed expectations. Hawkish BOE comments support sterling ahead of Britain's reopening on Monday.

Gold remained on the defensive through the first half of the European session and was last seen hovering near the lower end of its daily trading range, just above the $1,820 level.

Bitcoin miners evolve and adapt while bulls gear up for $38,000

NYSE:GME dipped by 0.48% on Thursday, as the broader markets continued to show volatility. Netflix announces its entry into the videogame market. AMC outpaces the market as the meme stock bucks its recent trend.