Market tensions and tentative signs of softening growth won’t stop the Fed hiking interest rates this week, but there is skepticism of the Fed’s prognosis of three further hikes for 2019. Markets will be looking for signs of cracks in the Fed’s position.

- by James Knightley and Jonas Goltermann

Markets broadly expect a 25bp rate rise on Wednesday, and we agree. After all, the economy is booming, inflation is at or above the 2% target, and the jobs market is finally generating wage pressures.

However, the outlook for policy in 2019 is more uncertain. Back in September the Federal Reserve “dot diagram”, which shows the individual predictions of FOMC members, pointed to a median expectation of three 25bp rate rises next year with a further 25bp hike in 2020. Market participants are increasingly skeptical of this with Fed funds futures contracts no longer even fully pricing in one hike in 2019. 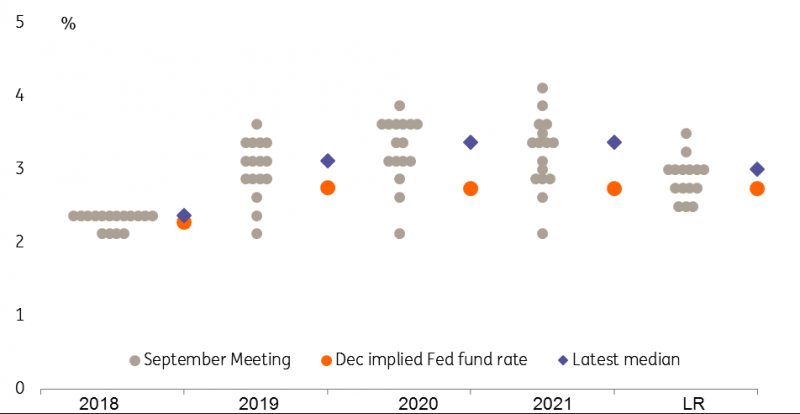 Markets are clearly wary of the potential damage to the economy from trade tensions and equity market weakness while President Trump’s increasing vocal interventions regarding monetary policy seem to be leading to a softer tone from Federal Reserve officials. Indeed, Fed Chair Jerome Powell has recently switched from suggesting monetary policy was a “long way” from neutral (October 3rd) to suggesting rates are “just below” estimates of neutral policy (November 28th).

So who is right? The Fed signalling that the policy rate is likely to peak above 3%, or the market which says we are pretty much there already?

The case for more…

2018 has been a great year for the US economy with output likely expanding at the fastest rate for 13 years and the unemployment rate falling to a 49 year low. There is broad-based momentum with huge tax cuts providing additional thrust over recent quarters. As such the Federal Reserve has raised its Fed funds target rate in each of the first three quarters of the year with another rate rise looking almost certain on Wednesday.

There are clear arguments for further interest rate increases next year. For example, wage growth has broken above 3%YoY, and we think there is more upside ahead given the tightness of the labour market. Indeed, the NFIB survey suggests that companies are finding it increasingly difficult to find labour and are consequently increasing compensation while the Federal Reserve has noted increasing competition on benefit packages including healthcare, vacation days and signing bonuses. If we are right and wages continue rising then, this will support consumption while adding to medium-term inflation pressures.

Moreover, business surveys remain at very strong levels, which suggests that any slowdown in employment growth is more down to the lack of workers to fill vacant positions than a lack of demand for those workers. It also points to ongoing healthy GDP growth with the Atlanta Fed Nowcast model suggesting 4Q GDP growth is currently running at 2.4%, which is in line with our own forecast for the quarter as a whole. While acknowledging the growing headwinds to the US growth story, we still expect the economy to expand by around 2.4% next year with core inflation pushing above 2.5%YoY.

The case for less…

While 2018 has indeed been a good year for growth, the economy faces more headwinds in 2019. The lagged effects of higher interest rates and the stronger dollar are increasingly being felt while the support from this year’s fiscal stimulus will fade. 30Y fixed-term mortgage rates are now above 5%, and home sales are slowing, which has negative implications for construction spending and associated retail activity next year (furniture and furnishings etc.). Investment spending growth also appears to be softening despite the large corporation tax cut.

At the same time, there are concerns that intensifying trade tensions could exacerbate the softening trend, particularly given a weaker external environment where Germany, Japan and Italy all saw their economies contract in 3Q18. This more negative environment has seen equity markets come under pressure and President Trump increasingly criticising the Fed’s policy stance. Indeed, President Trump commented directly at the Fed “you have to understand, we're fighting some trade battles, and we're winning. But I need accommodation too”.

The Fed dropped the line that monetary policy was “accommodative” back in September and recent comments from Fed Chair Jay Powell suggest policymakers now acknowledge they are getting close to neutral policy. However, we believe that policy is still some way off from being restrictive and while there are certainly more headwinds, there are clear positive that can keep growth running at a respectable rate. Core inflation measures will continue to grind higher in such an environment, so we think there is a strong case for further rate hikes.

Like the Fed, we are currently predicting three rate rises next year, but there is a lot of uncertainty, particularly relating to trade and we see the risks increasingly being skewed towards just two hikes. Trade is a topic the equity market appears highly sensitive too so bad news on this front could have a significant impact on thinking of the Fed.

There have also been suggestions from some officials – most notably Lael Brainard - about raising the countercyclical buffer for banks. This could be used as an alternative way of tightening monetary conditions by making banks hold more capital against their loan portfolio, rather than raising interest rates.

We suspect there will be a slightly lower profile for the Fed “dot diagram” in acknowledgement of the trade threat. Indeed there are currently nine FOMC members forecasting 3 or more hikes next year and seven for two or fewer. If just two members from the first group lower their forecasts this would take it down to a median forecast of two hikes for 2019.

Even if that is the case, this is still well above where Fed funds futures and the OIS curve is priced so may not have a significant impact longer term on financial markets. However, the red headlines on the newswires of the Fed downwardly revising its projections could be enough to see a short-term hit to the dollar, but support for equities. 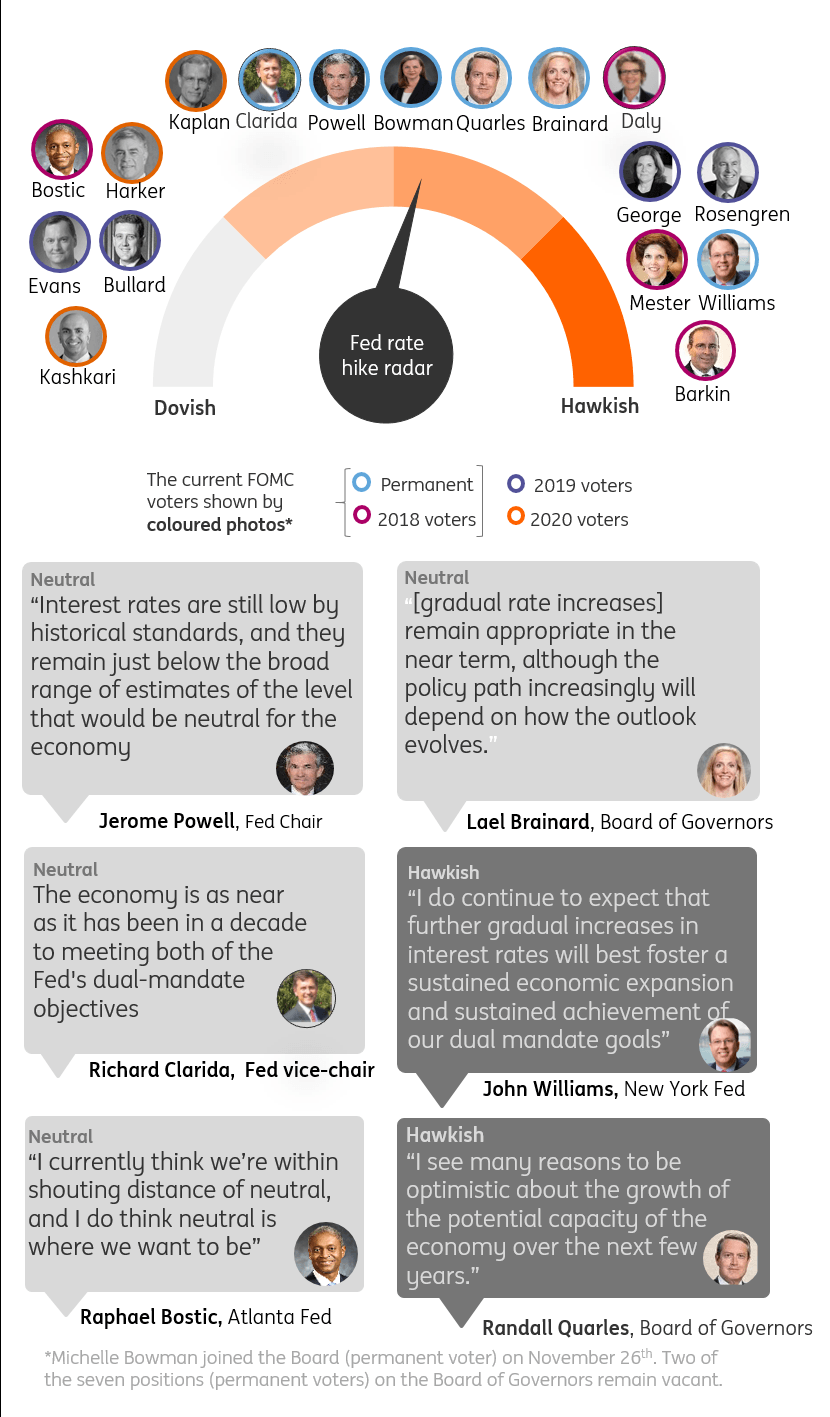 Read the original article: Federal Reserve preview: A hike, but what next?