While the USD show is gaining applause, silver has decided to present its repertoire too. Was its rally just a magic trick or a good omen for gold?

Bond yields soared once again, just as I’ve been expecting them to for many months now. The reaction in some markets was as expected (the USD Index soared), but in some, it was perplexing. Gold moved lower a little, miners declined a bit more, and silver… rallied. Who’s faking it?

Well, perhaps nobody is. Let’s look at the yields’ movement first. 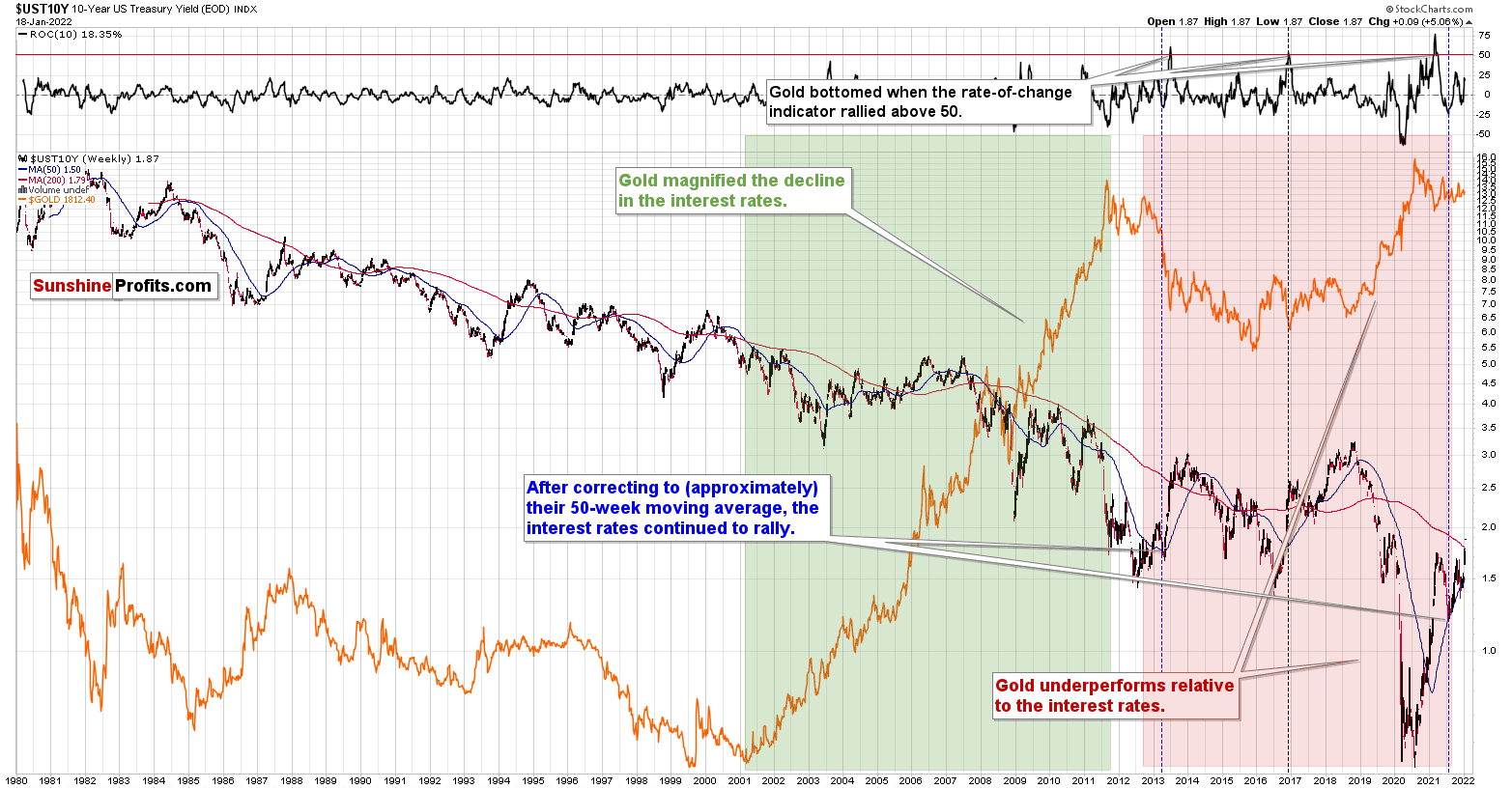 The 10-year bond yields have just moved to new yearly highs and are also above their 2021 highs. This happened just after they moved back to their 50-week moving average (marked in blue). For a long time, I’ve been writing that the 2013 performance is likely to be repeated also in this market, and that’s exactly what is taking place right now. Bond yields are doing what they did back then.

If history continues to rhyme, we can expect bond yields to rally further, the USD Index to gain, and we can predict gold at lower prices.

Speaking of the USD Index, let’s take a look at what it did yesterday. 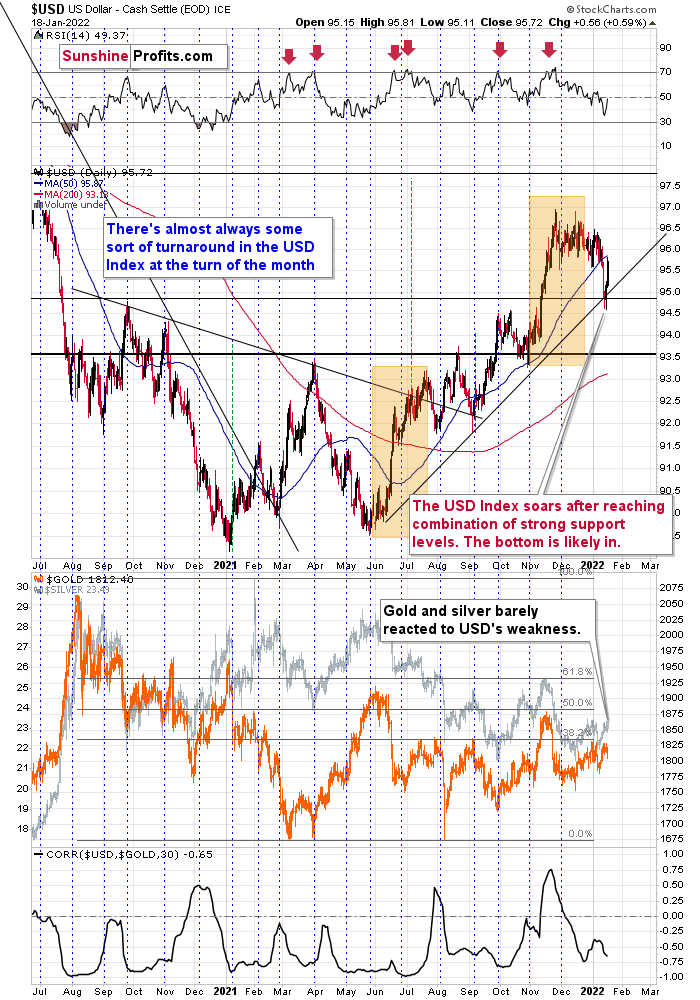 It soared over 0.5 index points, which was the largest daily increase so far this year. This happened after the USD Index moved to a combination of powerful support levels: the rising medium-term support line and the late-2020 high. The tiny attempts to move below those levels were quickly invalidated, and the USD Index was likely to rally back up, and so it did.

Gold didn’t react with a significant decline yesterday – just a moderate/small one – which some might view as bullish. I’d say that it’s rather neutral. 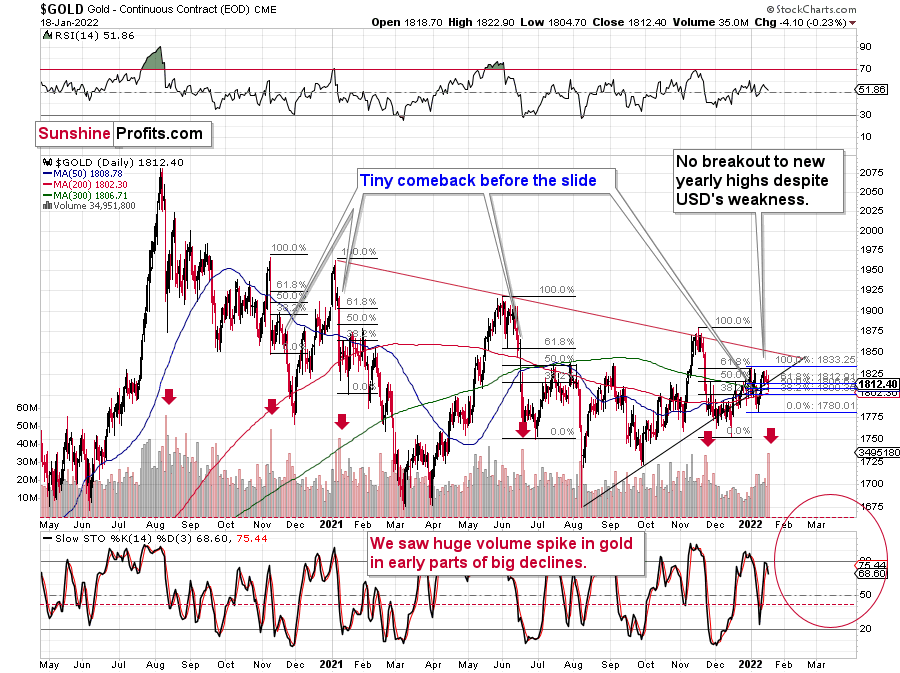 The rally above the 2021 highs in bond yields might have come as a shock to many investors, and they might not have been sure how to react or what to make of it. It might also have been the “buy the rumor, sell the fact” type of reaction. Either way, it seems to me that we’ll have to wait a few days and see how it plays out once the dust settles.

The volume that we saw yesterday was huge. After a period of relatively average volume, we saw this huge volume spike. I marked the previous cases with red arrows. In those cases, such volume accompanied gold’s sizable declines. This time, the volume spike accompanied a $4.10 decline, which might appear perplexing.

Fortunately, gold is not the only market that we can analyze, and – as it’s often the case – context provides us with details that help to make sense of what really happened. Let’s check the key supplemental factor – silver’s price action. 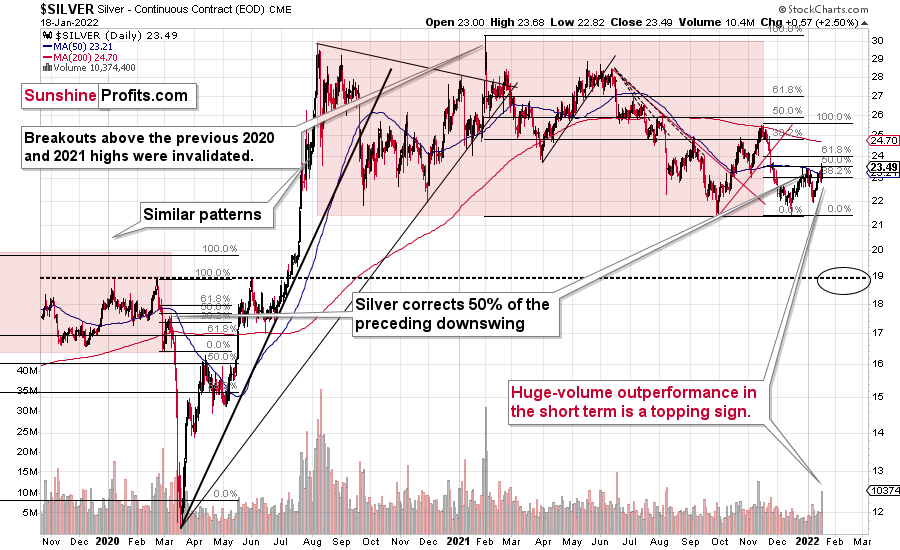 While gold declined a bit, silver soared over $0.5! The volume that accompanied this sizable daily upswing was the biggest that we’ve seen so far this year too. The latter provides additional confirmation of the importance of yesterday’s session. What was it that happened yesterday that was so important?

This is profoundly important because that’s what has been accompanying gold’s, silver’s, and mining stocks’ tops for many years. Knowing to pay attention to even small signs of silver’s outperformance is one of the useful gold trading tips, and the extent of the outperformance is what determines the importance of the signal (and its bearishness). The extent was huge yesterday, so the implications are very bearish.

Yes, silver moved to new yearly highs as well, but silver is known for its fake breakouts (“fakeouts”), which usually happen without analogous moves in gold and mining stocks. Since neither gold nor miners moved to new yearly highs yesterday, it seems that silver “faked out” once again. Silver is up in today’s pre-market trading, and gold is up only slightly, but the latter is not even close to moving to new 2022 highs. The GDX ETF is actually down in today’s London trading (at the moment of writing these words).

Speaking of mining stocks, let’s take a look at what happened in them yesterday. 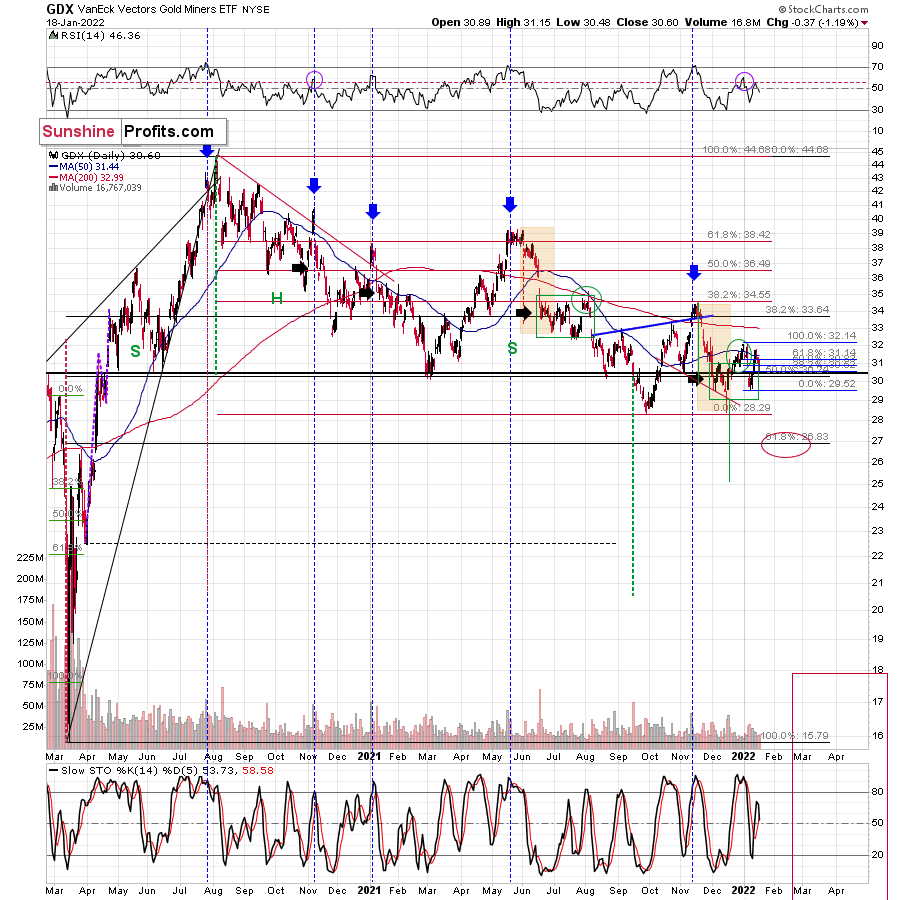 In short, they declined – by over 1%, which is about five times more than gold. Since silver outperformed gold, while gold miners underperformed it, the implications for the precious metals sector are bearish.