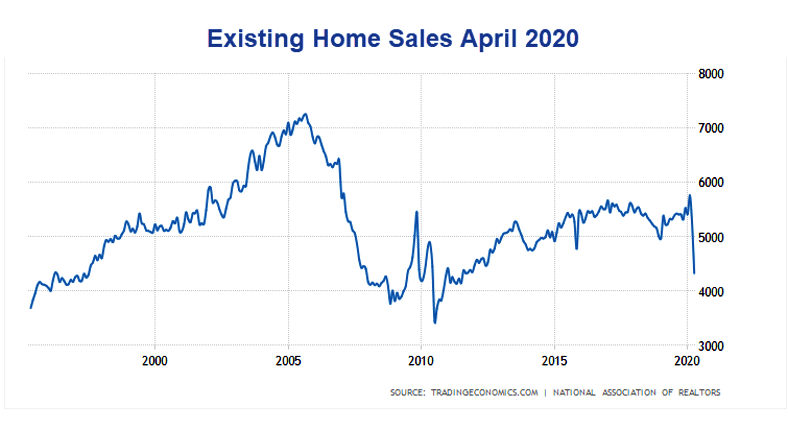 Total existing-home sales, completed transactions that include single-family homes, townhomes, condominiums and co-ops, dropped 17.8% from March to a seasonally-adjusted annual rate of 4.33 million in April. Overall, sales decreased year-over-year, down 17.2% from a year ago (5.23 million in April 2019).

"The economic lockdowns – occurring from mid-March through April in most states – have temporarily disrupted home sales," said Lawrence Yun, NAR's chief economist. "But the listings that are on the market are still attracting buyers and boosting home prices."

Supposedly listings "are still attracting buyers" despite the fact that sales are down 17.8% on top of a 8.5% decline in March.

"Record-low mortgage rates are likely to remain in place for the rest of the year, and will be the key factor driving housing demand as state economies steadily reopen," Yun said. "Still, more listings and increased home construction will be needed to tame price growth."

Not the Bottom in Transactions

April will not mark the bottom in sales. Here's why.

May sales (transactions in March and April) are sure to be worse. Even June sales could be worse.

Expect Prices to Drop Too

To expect buyers to return en masse and price to hold up as well is irrational.

Ignore the cheerleading from the NAR. Better prices await buyers who are patient.