Over the past few weeks, euro has been one of the best performing currencies. It rose to a nearly 4 month high versus the US dollar despite weaker than expected economic data. Eurozone industrial production rose only 12.4% against a 15% forecast. The expectations component of the German ZEW survey dropped to 59.3 from 63.4. The current conditions component rose from -83.1 to -80.9 but economists were looking for a much more significant improvement to -65. The Eurozone ZEW survey ticked up slightly to 59.6 from 58.6.  These numbers tell us that while the Eurozone is beginning to recover, investor sentiment remains subdued.  At best, investors anticipate a gradual recovery which is reasonable because the surge in cases in the US prevents a stronger global recovery.

With that in mind, the outlook for the Eurozone is still brighter than other parts of the world, as they successfully controlled the spread of COVID-19. Italy, one of the countries hit the hardest by the virus reported only 114 new cases today, its lowest since February.  Yesterday Germany reported only 159 cases, but that number increased to 412 on Tuesday.  Investors are still worried about a second wave in Europe especially with borders reopening and tourism resuming. Spain reported a surge in cases on Monday leading the government to return to a flexible stage two lockdown for areas affected. These numbers still pale in comparison to the huge numbers reported in the US on a daily basis.

The greenback traded lower against most of the major currencies despite stronger consumer prices. Stocks continued to rally on Tuesday after Biotech firm Moderna announced that will be starting phase 3 of their COVID-19 vaccine trails at the end of the month, joining Pfizer and BioNTech. The hope for a vaccine trumps everything else including the massive loss reported by Wells Fargo. Citigroup and JPMorgan reported significantly weaker earnings while Delta said sales plummeted 88%. The Empire State manufacturing survey and Federal Reserve Beige book report are scheduled for release tomorrow.  Economists are looking for improvements in manufacturing activity but softer numbers or a more subdued Beige Book could reverse the gains in equities triggering a sell-off in currencies.

Sterling sold off on the back of softer monthly GDP and industrial production numbers. The Australian dollar traded higher on the back of stronger business confidence and Chinese trade data. Despite Australian and Chinese trade tensions, China’s demand for coal and iron has increased significantly. Iron ore imports into China rose 10% in the first half of the year while coal imports rose 13%. The New Zealand dollar fell despite stronger housing data.

The focus will be on the Canadian dollar tomorrow with a Bank of Canada rate decision on the calendar. This will be the very first meeting for Governor Tiff Macklem who succeeded Poloz last month. When the central bank last met, they issued their latest economic projections which were less pessimistic. Earlier this year, they expected the economy to contract by 22% but altered that to -12%. It will be interesting to see if Macklem’s outlook differs. In mid-June, he said it will be a long time before the central bank removes stimulus as it's going to be a long slow recovery. They avoided the worse case scenario but don’t know how much damage there is to the economy. As such, the BoC can scale existing programs if needed.

Since their last meeting in June, Canada has flattened the curve with only 222 cases reported over the weekend. The table below shows the fruits of the labor with employment, housing and manufacturing activity improving. Unfortunately, the country’s proximity to the US and its economic reliance on its southern neighbor means the outlook is uncertain so chances are Governor Macklem won’t be overly optimistic. USD/CAD has been slowly inching upwards over the past few days so renewed concerns could drive it to 1.37. 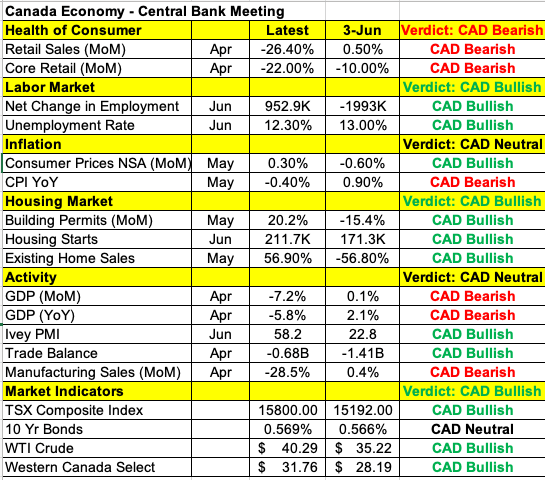