The EUR/USD pair ends the week with modest gains, although below the 1.1800 level, and not far from the low set at 1.1705. The dominant bearish trend was interrupted on Wednesday, following the release of US inflation figures. The Consumer Price Index was confirmed at 5.4% YoY, while the core reading for the same period was downwardly revised to 4.3% as expected. Still high, the numbers suggest that inflation may have reached a peak and that the US Federal Reserve is right on taking it slow on tapering.

However, the Producer Price Index in the country came in at 7.8% YoY in the same month, up from 7.3% previously, reviving tightening speculation and putting a halt to the dollar’s decline. Even further, weekly unemployment claims contracted to 375K in the first week of August, following an impressive July Nonfarm Payroll report. The US Federal Reserve has a dual mandate of price stability and maximum sustainable employment.

The central bank has been trying to cool down tightening expectations by saying that heating inflation will likely be temporary and resting on the tepid progress in the job sector to maintain the ultra-loose monetary policy. Inflation may have finally peaked - August figures will confirm or deny it - while employment recovery is picking up. The Fed will not be able to maintain its patient stance if August data is once again upbeat.

From the European Central Bank there have been a couple of weeks of silence after European policymakers pledge to maintain a “persistently accommodative” monetary policy as the pandemic cast a shadow over the economic comeback.

Additionally, Union’s data has been tepid, to say the least. The German ZEW survey showed that Economic Sentiment contracted to 40.4 in the country and to 42.7 for the Union in August, much worse than anticipated. The country’s CPI was confirmed at 3.8% YoY, while the Wholesale Price Index rose a modest 1.1% MoM in July. The EU published June Industrial Production, which unexpectedly contracted 0.3% MoM. On a positive note, the Union’s Trade Balance posted a seasonally-adjusted surplus of €12.4 billion.

Little has happened across the FX board, as summer in the northern hemisphere keeps traders away from their desks. Low volatility will likely persist in the days to come, with a couple of events outstanding in the macroeconomic calendar.

Nevertheless, chances of some action are limited. On Friday the US published the preliminary estimate of the August Michigan Consumer Sentiment Index, which unexpectedly plunged to 70.2, its lowest in almost a decade, and yet EUR/USD was barely able to advance.

On Tuesday, the EU will publish its Q2 Gross Domestic Product, while the US will release July Retail Sales, the latter seen declining 0.2% MoM.  On Wednesday, the US Federal Reserve will publish the Minutes of its latest meeting.

The EUR/USD pair has bottomed a couple of pips above its March low at 1.1703, bouncing just modestly afterwards. According to the weekly chart, the pair retains its bearish stance and needs to break below the 1.1700 price zone to confirm a steeper decline. In the mentioned time frame, the pair keeps developing below its 20 SMA, which has partially lost its bearish strength. The longer moving averages converge around 1.1530,   while technical indicators head south within negative levels, reflecting bears’ dominance.

Technical readings in the daily chart also show that sellers retain control. A bearish 20 SMA provides dynamic resistance at around 1.1800 while developing well below the longer ones, which lack directional strength. Meanwhile, the Momentum indicator stands pat below its midline, while the RSI recovers from oversold readings, currently around 45. 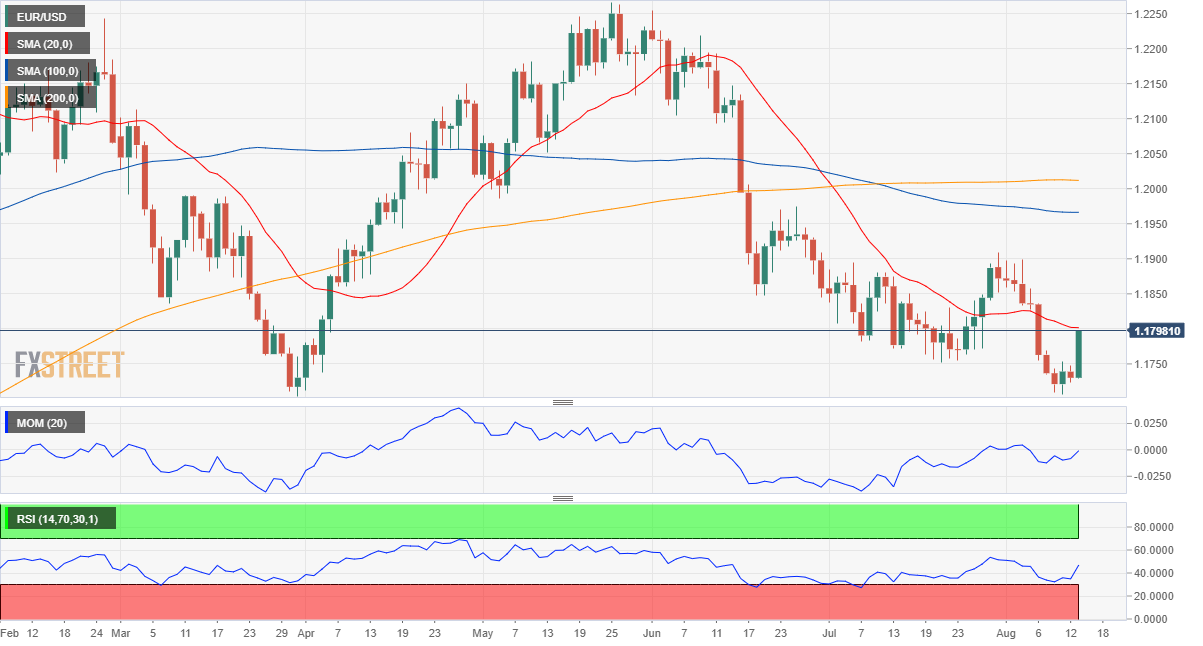 The FXStreet Forecast Poll shows that speculative interest keeps favouring the greenback. The EUR/USD pair is seen bearish in the weekly and monthly perspectives. Bulls reappear in the quarterly view, although they stand at 40% of the polled experts. The pair is seen on average, hovering around the 1.1800 figure.

According to the Overview chart, the risk remains skewed to the downside. The weekly and monthly moving averages consolidate at multi-month lows, while the longer one offers a strong bearish slope, somehow suggesting a persistent bearish strength.