The EUR/USD pair struggled to capitalize on its intraday uptick to weekly tops, or find acceptance above the 1.2100 mark and came under some renewed selling pressure on Wednesday. A sudden pickup in the US Treasury bond yields provided a strong lift to the greenback, which, in turn, was seen as a key factor that exerted some downward pressure on the major. The US bond market has been reacting strongly to the prospects for a relatively faster US economic recovery, which has been fueling expectations for an uptick in inflation and raised doubts that the Fed would retail ultra-low interest rates for a longer period. The reflation trade was driven by the impressive pace of COVID-19 vaccinations and the progress on a massive US fiscal spending plan.

The upbeat US economic outlook was unshaken by the disappointing release of the ADP report, which showed that the US private-sector employers added 117K jobs in February. The was well below the 177K anticipate and the previous month's upwardly revised reading of 195K, pointing to a sluggish recovery in the labour market. Separately, the official US ISM Services PMI also fell short of market consensus and dropped to 55.3 in February from 58.7 previous, though was offset by a slightly better employment sub-component and a measure of prices paid by companies. In fact, input costs surged to the highest level in nearly 12-1/2 years and bolstered expectations for faster inflation in the near term. Apart from this, a softer risk tone extended some additional support to the buck.

The violent selloff in the US Treasuries took its toll on the global risk sentiment. This was evident from a negative trading sentiment in the equity markets, which tends to benefit the traditional safe-haven greenback. On the other hand, the shared currency had a rather muted reaction to the release of the final Eurozone Services PMI print, instead took cues from indications that the ECB stands ready to react to surging yields. Nevertheless, the pair reversed the previous day's modest recovery gains and remained depressed through the Asian session on Thursday. The market focus now shifts to Fed Chair Jerome Powell's scheduled speech, which will be closely scrutinized to see if the US central bank is also concerned about the risk of a rapid rise in long-term borrowing costs.

From a technical perspective, the pair on Wednesday faced rejection near a short-term ascending trend-channel support breakpoint. Given the recent sharp pullback from near three-year tops, the mentioned channel constituted the formation of a bearish flag pattern on short-term charts. Failure near an important support breakpoint, now turned resistance supports prospects for further weakness. That said, bearish traders might wait for some follow-through selling below the key 1.2000 psychological mark before placing fresh bets. The pair might then turn vulnerable to challenge YTD lows, around the 1.1955-50 region and accelerate the slide further towards the next major support near the 1.1920-15 region.

On the flip side, the 1.2090-1.2100 region might continue to act as immediate strong resistance. This is followed by the 1.2130-35 supply zone, which if cleared decisively might trigger some near-term short-covering move. The subsequent momentum has the potential to push the pair further beyond the 1.2170 intermediate hurdle, towards reclaiming the 1.2200 round-figure mark. 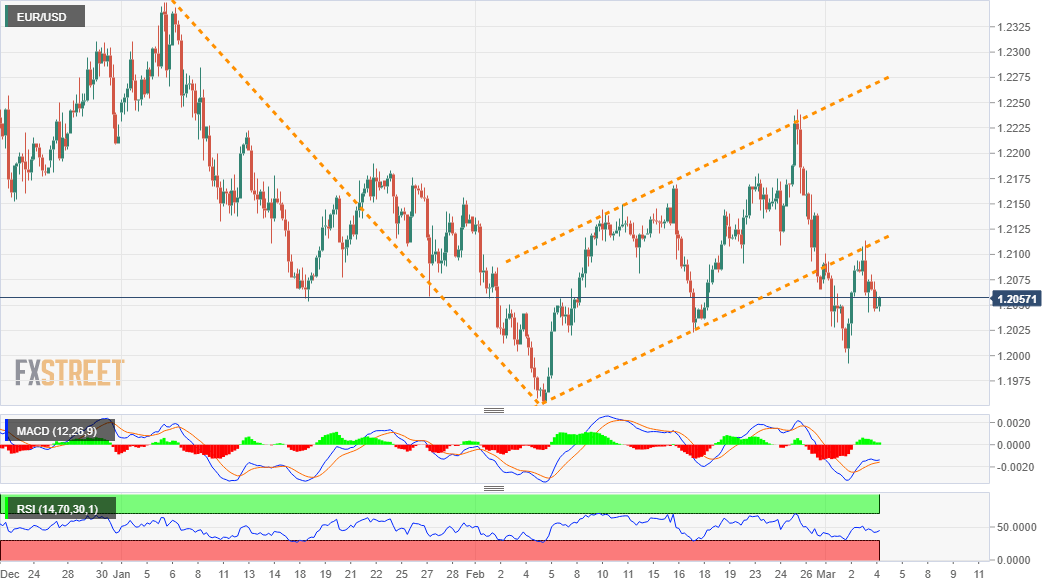