An ultra-busy week is set to close with the EUR/USD pair trading near a 4-month high of 1.1199. There were several first-tier events this week, and none of them disappointed in terms of rocking the boat.

Central banks steady, but with twists in the tones

First came the US Federal Reserve, which kept rates steady as expected, after three consecutive cuts. However, Chief Powell offered a more dovish than anticipated stance. Despite still optimistic about economic developments, Powell suggested that subdued inflation will imply low rates for longer. The dot-plot indicated that there won’t be changes in interest rates throughout 2020, as inflation is expected to continue to undershoot the Fed’s target. Chief Powell reiterated that the next moves will be data-dependent, including developments abroad related to global trade. The central bank’s median inflation is seen steady at 1.6% through the end of 2020, but increasing to 1.9% in 2021. The dollar came under pressure with the news.

Then, it was the turn for Christine Lagarde’s debut as ECB’s head. As expected, the European Central Bank also maintained its monetary policy on hold, although she sounded a bit more upbeat than her precursor, Mario Draghi. Growth was revised marginally lower for this year and the next, while inflation was upwardly revised for 2020, although no relevant changes were made. Bulls cheered the news, sending the EUR/USD further up.

US President Trump unleashed volatility this Thursday, by tweeting that a “big deal” was very “close.” News agencies later reported that the trade deal was done, and only needed Trump’s signature. Risk-appetite took over the financial world, although hopes were cooled later by headlines coming from China, indicating that local authorities haven’t yet accepted the trade deal.  The market, however, es cautiously optimistic on the matter, and more announcements could come ahead of the close.

The noise continues as US President Trump jumped into Twitter, to deny the story on tariffs, calling it fake news, and sending investors away from high-yielding assets, although then,  officials from China's State Council Information Office,  announced that they agreed with the US on the context of the phase one trade deal. The US will follow up on its promise to cancel tariffs on a phased basis, announced China's Vice Commerce Minister. The mood turned back up, although the story is far from over.

Meanwhile, Conservatives won in the UK, with PM Johnson’s Conservatives securing 364 seats, opening doors for Brexit to get done by the end of January, and further lifting the market’s mood.

Uncertainty is far from over, yet an initial trade deal between the US and China and the UK election’s outcome cleared much of it. That should lead to an increase in intraday volatile, maybe not in the upcoming days as the market is entering holiday mode, but is hinting a good start to 2020.

The market’s mood is still far from stable, as definitions are yet to come. As said, it will take some time to see in price action the effects of the positive news. However, major pairs could show a bit more of action with data releases.

This Monday, Markit will unveil the preliminary estimates of the December Manufacturing PMI and Services PMI for the EU and the US, with output seen improving in the Union but depressed in America.

There are not other relevant events throughout the week, although the EU will publish the final estimate of November inflation next Wednesday, while Germany will release the December IFO survey. Finally, on Friday, the US will unveil the final version of the Q3 Gross Domestic Product, foreseen steady at 2.1%.

The EUR/USD pair retreated to the 1.114080, failing to sustain gains above its October high, albeit retaining the positive momentum in the long-term. The pair faces a major resistance at around 1.1220, the 61.8% retracement of its June/September slump, with gains beyond the level opening doors for a test of 1.1411, June monthly high.

In the weekly chart, the pair has advanced above its 20 SMA, which partially lost its bearish strength and now converges with the 38.2% retracement of the mentioned slump. The 100 and 200 SMA remain far above the current level, indicating that in the long-term perspective the bullish potential is limited. Technical indicators, in the meantime, have advanced above their midlines, reaching fresh multi-month highs, although not far from neutral levels.

Daily basis, the bullish case is strong although the pair was unable to hold above the 200 DMA  after advancing beyond it for the first time since July. The 20 DMA is crossing above the 100 DMA, both around 1.1060, while technical indicators head firmly north near overbought readings. 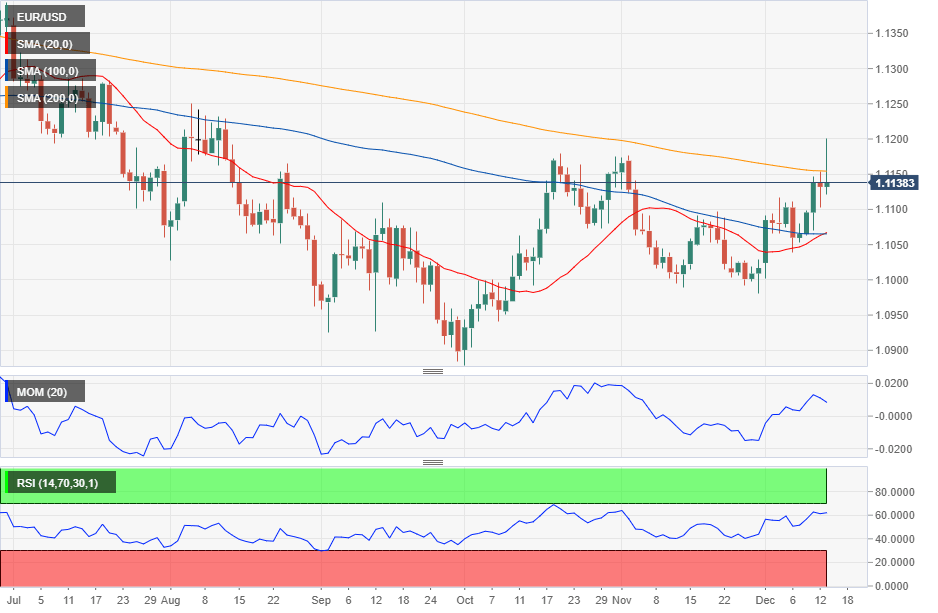 The FXStreet Forecast Poll shows that more gains are to be expected news week,as 86% of the polled experts are bullish in EUR/USD, targeting on average 1.1219. The sentiment shifts sharply to negative in the monthly and quarterly perspectives,  as bears account for 66% and 50% respectively, although the average target is 1.1100 in both cases.

The Overview chart, on the other hand, paints a more positive picture, as the moving averages have turned bullish in the three time-frame under study. Still, in the quarterly view, the largest accumulation of targets is between 1.10 and 1.11, rather indicating a cautious stance from investors than suggesting that the pair may lose its current momentum.

USD/JPY Forecast: US GDP and a rate decision from Japan promise action