"Win-win" –is how the EU and the UK have described their desired outcome from fresh negotiations on vaccine distribution. Will the euro also come out as a victor? Europe's sluggish immunization campaign has been hobbling the recovery in the old continent, which is suffering from an increase in cases and extended lockdowns. However, the road remains bumpy.

Here are three reasons EUR/USD's bounce may be short-lived

The fact that both sides are talking and trying to deescalate the situation is positive and helps the common currency find its feet. However, EU leaders are meeting virtually on Thursday with the covid crisis high on the agenda. Growing frustration from Europeans will likely lead to fresh finger-pointing at anybody but the bloc – which has mismanaged purchasing jabs.

Apart from blaming AstraZeneca – the world's favorite punching bag – leaders will likely revert to their anti-UK rhetoric. Worse off, they may continue advancing moves to block exports of vaccines or materials that are used to make them. Even if they stop short of drastic measures, the current truce is far from guaranteeing a solution – at least not on Thursday.

Joe and Joe are seeing eye to eye – Democratic Senator Joe Manchin supports raising taxes and spending on infrastructure, aligning himself with President Joe Biden. The West-Virginia lawmaker is the most centrist member of the ruling party and his support is crucial to passing any bill.

Why the dollar is rising while yields are falling, blame it on the taxman

The White House has announced that Biden will deliver a speech on the economy on March 31, in which he is set to lay out a plan worth as much as $3 trillion. Another boost to the economy would potentially raise inflation and prompt the Federal Reserve to raise interest sooner rather than later. That is dollar positive.

3) US data may turn positive

Durable Goods Orders figures for February, released on Wednesday, disappointed with a downfall and has probably lowered expectations for Thursdays' releases. However, final Gross Domestic Product statistics for the fourth quarter of 2020 will likely confirm the 4.1% growth rate, and jobless claims could continue falling.

The latter figure is for the week ending March 19, as the economy accelerated its reopening. Any improvement would also raise speculation for a rate hike – even if the Fed says inflation will only rise at a moderate pace.

All in all, EUR/USD has room to resume its falls. 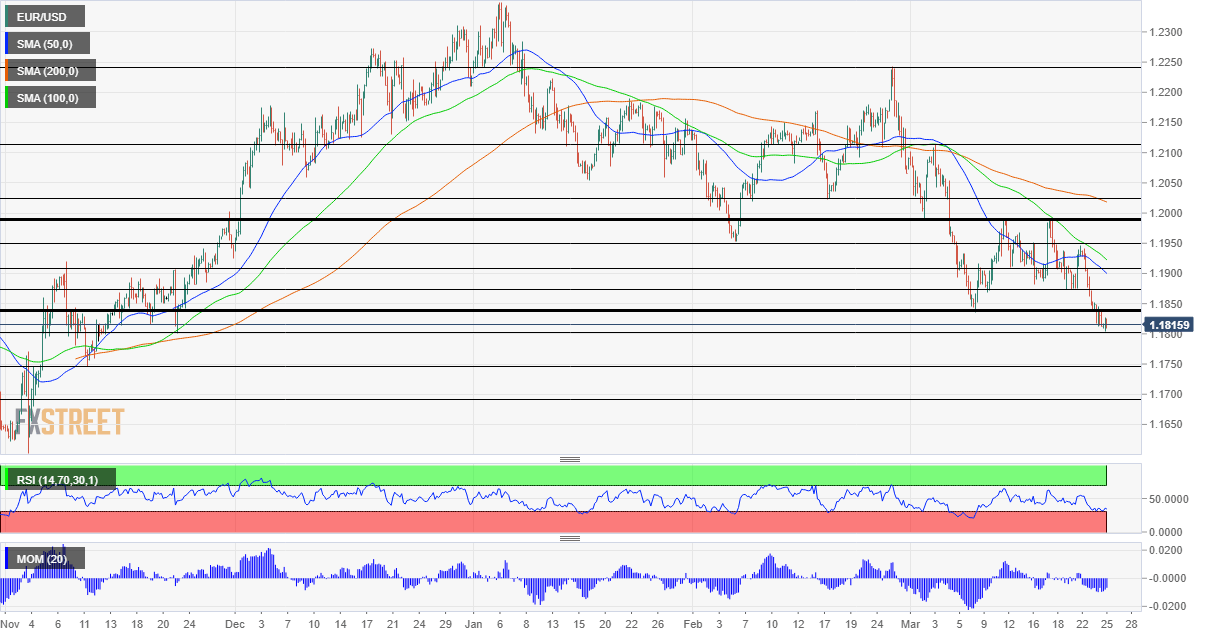 The Relative Strength Index on the four-hour chart has bounced above 30 – exiting oversold conditions and allowing for more falls. Momentum has turned to the downside and the currency pair trades well below the 50, 100, and 200 Simple Moving Averages, a bearish sign.