Lingering economic damage from last spring's lockdowns and continuing job losses from failing business should keep requests for unemployment insurance over 700,000 for the 53rd week in a row.

Continuing claims are expected to fall to 4.03 million in the March 12 week from 4.124 million the lowest of the era.

American employers have executed an about face, hiring 545,000 workers in January and February after releasing 306,000 people in December, the first monthly loss since April 2020.

California's reconstituted lockdown in December, since rescinded, and other local restrictions were the culprit. They brought the four-week moving average of Initial Claims from 740,500 in the last week of November to 851,750 in the second week of January. Payrolls then followed unemployment higher. Claims have fallen back to 746,250 in the latest March 12 week.

First quarter economic growth is running at a 5.7% annualized rate according to the Atlanta Fed GDPNow model. The Fed Projection Materials issued at last week's Federal Reserve Open Market Committee (FOMC) meeting posited a 6.5% expansion for all of 2021. 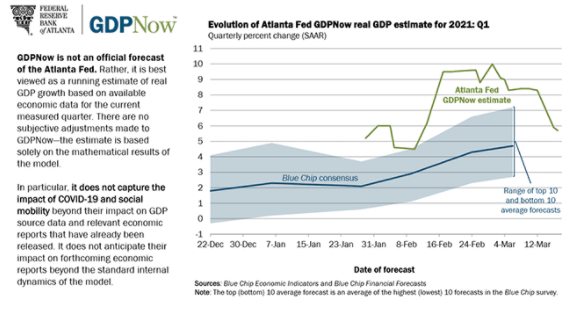 If the Nonfarm Payrolls (NFP) March estimate of 500,000 is correct just over one million people will have been hired in the first quarter.

If the Fed GDP estimate is accurate the US economy could create a million or more jobs every quarter. That would mean a little less than half of the extant pandemic unemployed from the NFP books, 9.475 million, would be rehired by year's end.

The US success at rehiring the pandemic unemployed, many of whom are in the still moribund travel, hospitality and restaurant sectors, which also, along with retail stores, produce the continuing high numbers of layoffs, will depend on how eager people are to resume their old pursuits.

With vaccination rates in the US among the best in the world and availability continuing to rise, the optimistic prognosis for the economy has equity and currency markets investing in American assets and the dollar. There is no current reason for that to change.