Market Overview
The Federal Reserve signaled it would not hike interest rates this year amid a slowing economy and announced a plan to end its balance sheet reduction program by September.
The U.S. central bank reiterated its pledge to be "patient" on monetary policy, and said it would start slowing the reduction of its holdings of Treasury bonds in May, lowering its monthly cap to USD 15 bn from USD 30 bn.
"It may be some time before the outlook for jobs and inflation calls clearly for a change in policy ," Fed Chairman Jerome Powell said.
Updated economic forecasts released at the end of the meeting also showed policymakers had abandoned projections for any rate increases this year, and see just one rate hike next year. 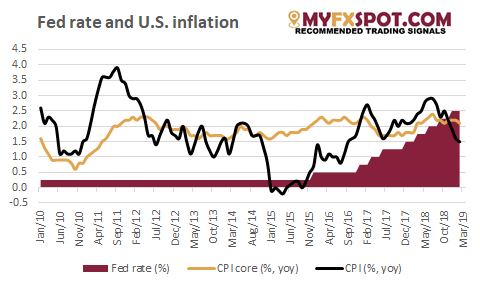 After the announcement, fed funds futures contracts began pricing in a better-than-even chance of a rate cut by next year.  Powell pushed back on that view, saying the U.S. economy is in a "good place" and that the outlook is "positive."
The new economic projections released on Wednesday showed weakening on all fronts compared to the forecasts from December, with unemployment expected to be slightly higher this year, inflation edging down, and economic growth lower as well.
Fed policymakers project GDP growth to slow to 2.1% this year from the previous forecast of 2.3%, while the unemployment rate is forecast at 3.7%, slightly higher than the December projection.
Inflation for the year is now seen at 1.8%, compared to the Fed's forecast in December of 1.9%.
The new projections amounted to a wholesale downgrade of the Fed's outlook, with at least 9 of its 17 policymakers lowering their expected rate path and collectively shaving a full half of a percentage point off the expected fed funds rate at the end of this year.
EUR/USD's biggest one-day rise since January 25, helped bulls break above the 1.1420 Fibonacci, a 61.8% retrace of 1.1570 to 1.1177 fall. The thickening daily cloud, which currently spans the 1.1382-1.1409 region, underpins. Bulls should seek to avoid a daily close below the cloud base. We are long at 1.1390 for gains to our 1.1590 target.

Our research is based on information obtained from or are based upon public information sources. We consider them to be reliable but we assume no liability of their completeness and accuracy. All analyses and opinions found in our reports are the independent judgment of their authors at the time of writing. The opinions are for information purposes only and are neither an offer nor a recommendation to purchase or sell securities. By reading our research you fully agree we are not liable for any decisions you make regarding any information provided in our reports. Investing, trading and speculation in any financial markets may involve high risk of loss. We strongly advise you to do your own research before making any investment decision.