The EURUSD pair was little changed in the overnight session since the American markets were closed for Thanksgiving. Still, investors took the minutes of the European Central Bank (ECB) into consideration. The minutes reflected the overall cautiousness that the bank has about higher interest rates. Analysts believe that the bank will be among the last ones to tighten because of the uneven recovery of the region. The market will get more clarity from Christine Lagarde who will deliver a speech today. Still, volumes will be low since most Americans will be in a thanksgiving mood.

The price of crude oil has held steady even after the US started releasing the Strategic Petroleum Reserves. The country is coordinating with other countries like the UK, China, and India. For now, the strategy seems like it has backfired. According to Bloomberg, the reason is that Saudi Arabia’s Crown Prince has leverage over Biden. Unlike during the Trump administration, the prince has not had access to the White House. Therefore, there is a likelihood that the OPEC+ cartel will respond by lowering production.

The economic calendar will be relatively muted today. In addition to the speech by Christine Lagarde, the most important data will be the Swiss GDP numbers. Analysts expect the data to show that the country’s economy expanded by 1.3% on a quarter-on-quarter basis. This translated to a year-on-year expansion of about 3.2%. The Swiss economy has done well helped by both local and external demand. The other important numbers will be the German import and export price index and Canada’s budget balance.

The four-hour chart shows that the EURUSD pair has been relatively unchanged in the past few days. The pair is trading at 1.1208, which is a few points above the lowest level this week. As a result, the pair is still below the 25-day moving average while oscillators have cooled down a bit. The pair has also formed a falling wedge pattern, meaning that it will likely rebound in the coming weeks. For today, the pair will likely remain in the current range. 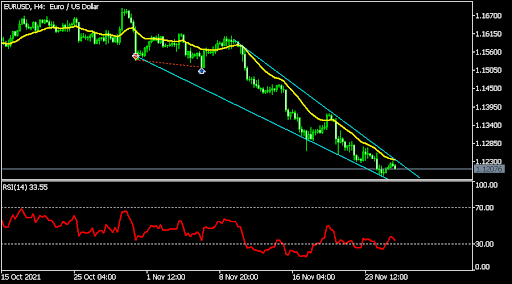 The USDCHF pair jumped sharply ahead of the latest Swiss GDP data. It is trading at 0.9358, which is a few points below the year-to-date high of 0.9372. The price is also close to its highest level on September 28. It has also moved above the 25-day and 50-day moving average. Also, it has formed a V-shaped recovery. Therefore, while the overall trend is bullish, there is a possibility that it will have a pullback today after the GDP data. 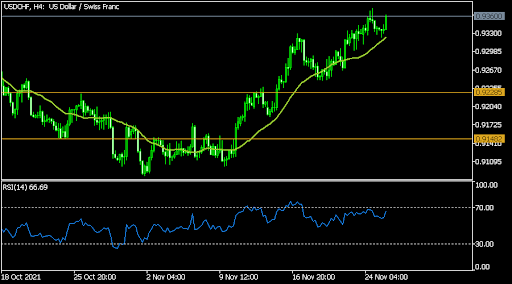 The ETHUSD pair made a bullish breakout as demand for cryptocurrencies bounced back. The pair is trading at 4,520, which was the highest level since November 18. It managed to move above the important resistance level at 4,432. This was the neckline of the inverted head and shoulders pattern. It has also moved above the 25-day moving average while the MACD has moved above the neutral level. Therefore, the pair will likely keep rising during the Thanksgiving weekend. 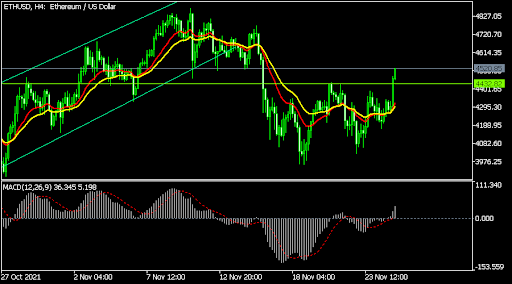