Joseph Trevisani: Initial jobless claims drop to 712,000. Another head-fake.  Two weeks of rising claims, 76,000 in total, ascribed to the new business closures in some states, turn out to be statistical noise. In July and August, claims also rose by 127,000 and 133,000 and then reverted to trend claims. 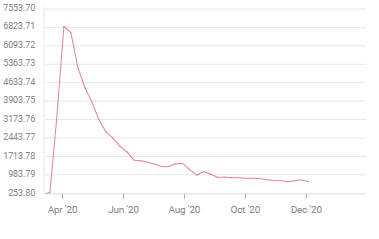 Yohay Elam: That's the issue with high-frequency data, it is noisy. Forex traders have similar dilemmas every day: Is it a change of course or only a correction?

Joseph Trevisani: Yes, then the tendency is to forget its trend data.

Yohay Elam: In the bigger scheme of things for the US labor market, the numbers are going in the right direction, but the pace of the recovery has moderated. The low-hanging fruit has been picked. Job restoration is nearing its end, now it may be about new job growth.

Yohay Elam: Restaurants can shift to deliveries, partially. Hotels may spring up out of the famous places, to some extent. There's no silver lining for airlines.

Joseph Trevisani: All possible but the employment numbers for delivery and new hotels are much smaller. Restaurants, I think will come back quickly once the restrictions are lifted..hotels and airlines will take longer.

Yohay Elam: I think that the recent promising vaccine developments will help keep many businesses alive.

Yohay Elam: Hope means holding on for businesses that are in a dilemma and for banks financing them.

Joseph Trevisani:  Exactly. Or Eggzactly as my kids say.

Valeria Bednarik: Guess your words are key, Yohay. The pace of recovery has moderated. May I add it will also indicate it will take longer to return to pre-pandemic levels?

Yohay Elam: Vaccine hope is unlikely to be reflected in November's Nonfarm Payrolls, too soon.

Joseph Trevisani: Once the threat of the pandemic is released I think the economy booms... I offer the ISM new orders as proof. We shall see today what services have to say for Novemberevidence rather not proof.

Yohay Elam: Final eurozone and UK services PMIs were upgraded, perhaps a result of jab joy. Can recent dollar weakness be attributed to the British approval of the Pfizer/BioNTech vaccine? Risk-on unleashed? Or are there other factors in play?

Joseph Trevisani: That is a bit of a puzzle. Fundamental factors are generally equally. The Fed is on hold for the foreseeable future, but so is everyone else, US exposures are rising and Europe's have apparently peaked, but that is a function of Europe's earlier rise, the vaccine will be effective equally...and the US economy is certainly no worse off than Europes and its growth record is much better. Markets re as yet, unwilling to switch back to comparative economics. Surely there isn't any pandemic premium left to take from the Dollar.

Valeria Bednarik: I do believe it's an overreaction to encouraging news, followed by technical momentum after critical levels were vulnerated. The market is close to cooling down and finding a balance after finishing digesting the bunch of fundamental news we had these days. Stocks are struggling to post gains, risk-appetite is not that clear.

Joseph Trevisani: I agree on momentum and a technical breakout.

Yohay Elam: EUR/USD used to be frustrating, and now it's on fire.

Joseph Trevisani:  The scenario hasn't changed. Good news on pandemic lower Dollar. Even though I don't think that is the main logic now, but technical momentum.

Valeria Bednarik: There's not much logic involved at the time being, indeed. We know this behavior, let's hope it doesn't go back to boring once the dust settles.

Joseph Trevisani: No I think once the pandemic is put to rest there will be a period of adjustment meant.

Valeria Bednarik: The UK will start vaccinating next week. The US won't take much longer. Guess after a couple of months we will be able to predict whether the vaccine is good enough to bring us back to normal.

Yohay Elam: Jerome Powell, Chairman of the Federal Reserve, said that he expects a comeback in the second half of 2021. Or something along those lines. Perhaps if demand returns and there is not enough supply, inflation could rise?. And the Fed would be forced to signal to raise rates earlier?. I know higher inflation sounds outlandish now...

Valeria Bednarik: Inflation didn't rise enough in the last 12 years, despite the 2008 crisis and the following economic boom. Why should it be a concern now? Honestly, I don't expect the scenario you are presenting. It was barely starting to pick up when the pandemic hit.

Joseph Trevisani: I agree, the trend primarily globalization of production and delivery are against inflation.  Monetary excess has not changed that, either in the 2008 crisis or now.

Yohay Elam: My outlandish scenario is due to a temporary demand/supply imbalance. In the long run, globalization is deflationary indeed.

Valeria Bednarik: The Fed will think it twice before pulling the trigger, even if it's due to a temporal imbalance.

Joseph Trevisani: Indeed some items have risen during the pandemic due to supply shortages. Rifle ammunition, even for basic types has tripled in price or more. But the vast majority of items have seen little price impact.

Yohay Elam: Speaking of the Fed, can we expect a quiet pre-Christmas rate decision? It seems he is in no rush to add more QE.

Joseph Trevisani: We are approaching the point where the economy, given room, will recover on its own.

Valeria Bednarik: Yes, Fed will likely be a non-event this December, mainly considering that the beginning of vaccination will imply a wait-and-see stance, not only for the US Central Bank.

Joseph Trevisani: Plus their change in administrations.

Yohay Elam: Indeed, so many reasons to wait. Wait and leave the scene to politicians

Joseph Trevisani: Agreed, it would be a shocker...

Yohay Elam: If it materializes, there is little room for fiscal stimulus. It seems the chances for something in the lame-duck session have improved. Another market booster Dollar downer.

Joseph Trevisani: I don't think there will be a stimulus deal.

Yohay Elam: Because of the Georgia elections, politicians could refrain from a compromise. And that would disappoint markets.

Joseph Trevisani: The Democrats will want full credit so no incentive to pass now. And if the Republicans retain the Senate they will do what the Democrats did in the run-up to the election,  to deny as much credit to the incoming administration as possible. Politics will be in full flower, particularly as both sides know the economy will recover on its own once the pandemic is over.

Yohay Elam: The CARES act was a rare moment. The tremendous fiscal stimulus did wonders.

Joseph Trevisani: Panic does that.

Yohay Elam: But I remain optimistic in this round.

Yohay Elam: Because of the bipartisan initiative.

Joseph Trevisani: I just don't see it getting done in a lame-duck session.

Yohay Elam: A big IF though.

Yohay Elam: Trump cannot veto a deal that has a super-majority of two thirds if I'm not mistaken.

Joseph Trevisani: For markets, the question is when do normal pricing factors return?  Equities are mostly there, US credit is restrained by the Fed, otherwise, I think rates would be considerably higher. Currencies are off on their own, which argues for an adjustment ahead. US credit.

Yohay Elam: I see the Fed as the main factor underpinning stocks, but every rally has its reckoning.

Joseph Trevisani: Yes, but remember the post-crash rally. Folks said the same thing, but when the Fed reduced then ended QE. equities simply started from that level...they did not revert to pre-QE ranges.

Joseph Trevisani: There will be a long roll-off period rather than outright sales.

Joseph Trevisani: Financial markets are built on trust and credibility.  To steal a phrase, the Fed can do this forever, until it can't.

Valeria Bednarik: I was thinking just the same, and thinking about the balance sheet of multiple other countries. US one is far from being the scariest. It's not about the chart, but as Joseph said, about trust.

Joseph Trevisani: The lack of options for their policies is the central bank's greatest asset.

Joseph Trevisani: Government debt is a bit of a Ponzi scheme.

Yohay Elam: A matter of trust...

Joseph Trevisani: But, as they say, is a topic for another day. Maybe once we colonize Mars. That is a topic...

Joseph Trevisani: I saw that Edgar Rice Burroughs would be pleased.

Yohay Elam: Back to Planet Earth. Can we expect this dollar downfall to continue? It's massive.

Valeria Bednarik: In the near term? yes. I could see it correcting but not changing course.

Joseph Trevisani: Never get in front of the train, especially if no one is driving. I wonder if it could be tied to the new administration? The timing is correct, but against that idea are equities, which are very strong.

Yohay Elam: Lower uncertainty: the elections are over, and we can see the end of coronavirus with tons of money sloshing around nothing not to love for markets. Lower uncertainty is a dollar downer.

Joseph Trevisani: Yes that has been a pandemic truism. Still so.