The Australian dollar rose in early trading after the Reserve Bank of Australia (RBA) published minutes of the recent meeting. These minutes shed colour into the reasoning of the bank’s decision to leave interest rates and quantitative easing policies unchanged. In them, the central bank committed to doing what it reasonably can to support the economy. The minutes also said that it will not raise rates until inflation moves between 2 to 3% target band. Also, it is committed to undertaking more bond purchases beyond the $200 billion it announced last year. The minutes also addressed the recent rally in house prices.

The British pound was little changed after rallying sharply yesterday. It rose by more than 1% against the US dollar as the latter sold off. Today, the focus will be on the latest UK employment numbers that will come out in the morning session. Economists expect the numbers to show that the unemployment rate increased from 5.0% in January to 5.1% in February. The average earnings ex-bonus is expected to remain unchanged at 4.2% while with bonus is expected to remain at 4.8%. Unlike other countries like the US and Australia, the UK jobs numbers have a one-month lag.

Cryptocurrencies prices continued their sell-off in the overnight session. Bitcoin, the biggest cryptocurrency in the world, dropped by more than 4% to $54,500. This is substantially lower than its all-time high of almost $65,000. Ether dropped by more than 8% while XRP, Litecoin, Bitcoin Cash, and Cardano declined by more than 10% each. The decline happened a day after these currencies bounced back after selling off during the weekend. This decline is partly because of buying the rumour, selling the news dynamics. This is after the currencies rallied towards the Coinbase listing.

The GBP/USD pair rallied to the highest level since March 18 because of the overall dollar sell-off. On the four-hour chart, the pair is attempting to move above the important resistance at 1.4000. It has also moved above the 25-day moving average while oscillators like MACD and RSI have continued to rally. The Parabolic SAR dots are also below the price. Therefore, while the pair may keep rising, a short pullback cannot be ruled out as some bulls start taking profit. 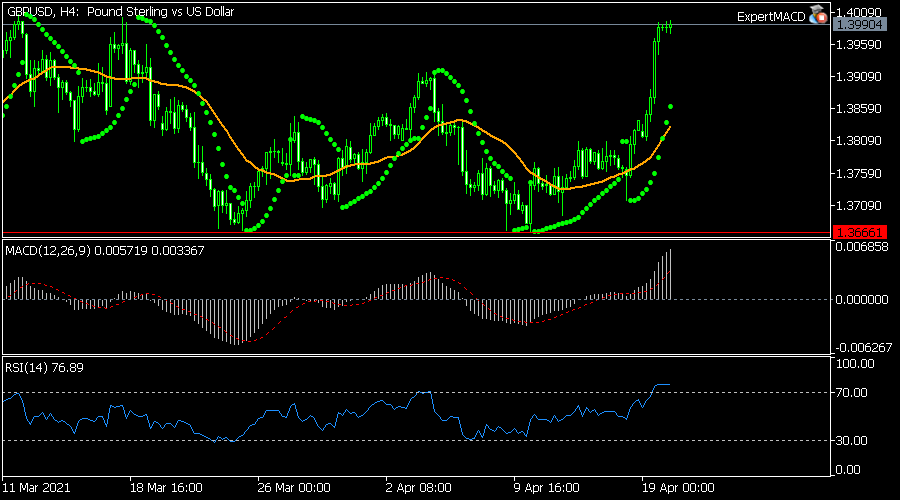 The EUR/USD pair rose to a high of 1.2045, also because of the weaker dollar. This was its highest level since March 4 this year. On the four-hour chart, the price is approaching the upper side of the ascending channel. It has also moved to the 38.2% Fibonacci retracement level. At the same time, oscillators like the RSI and Stochastics have also moved above the overbought level. Therefore, while the pair may rally to the 23.6% retracement at 1.2115, there is also a possibility that it will retest the lower side of the channel at 1.1972. 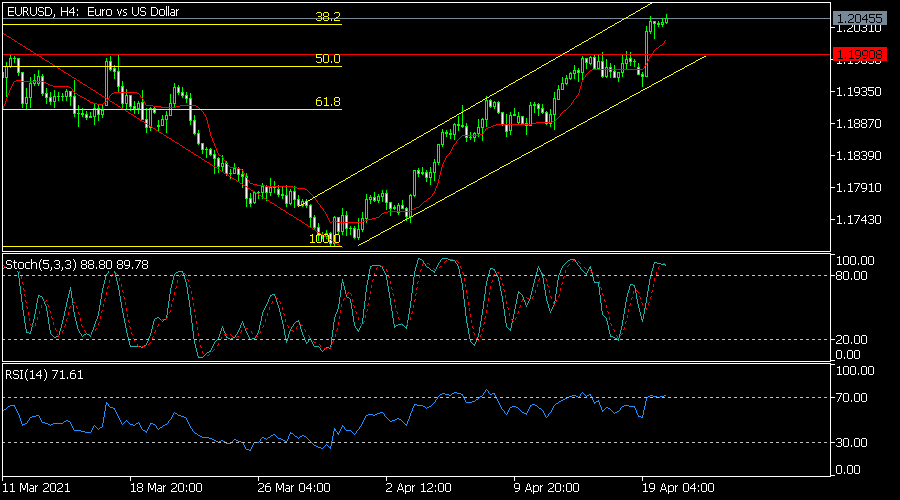 The BTC/USD gapped lower on Monday after it fell sharply during the weekend. This sell-off accelerated today, pushing the pair to 53,118. This was the lowest level since March 26. On the hourly chart, the pair has moved below the short and longer-term moving averages and is along the lower line of the Bollinger Bands. The Relative Strength Index (RS) has moved to the oversold level. The price may continue falling as bears target the support at 52,500. 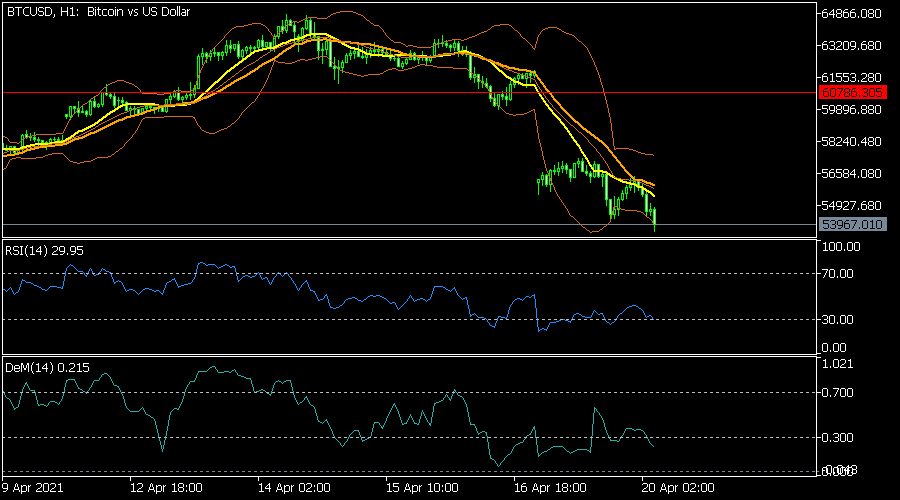