For US consumers, October’s Retail Sales were a classic case of ‘watch what we do, not what we say.’

After four months of the lowest sentiment readings in years, American consumers went out and rang up the most charges since March’s pandemic relief fueled 10.7% bonanza. Part of the rush may have been spurred by fears of shortages around the Christmas holidays, but the 1.7% increase in Retail Sales was the busiest October on record.*  September’s sales were revised up to 0.8% from 0.6%. Sales excluding automobiles rose 1.7%, also more than twice the September score of 0.7%.

The Retail Sales Control Group which mimics the consumption component of Gross Domestic Product (GDP) increased 1.6% in October, more than three times its prior 0.5% gain.

The Michigan Consumer Sentiment Index nose-dived in August, dropping to 70.3 from 81.2 for the largest one month fall in over a decade. Sentiment made a small recovery to 72.8 in September then headed down again to 71.7 in October and 66.8 in November, the lowest score in over ten years. 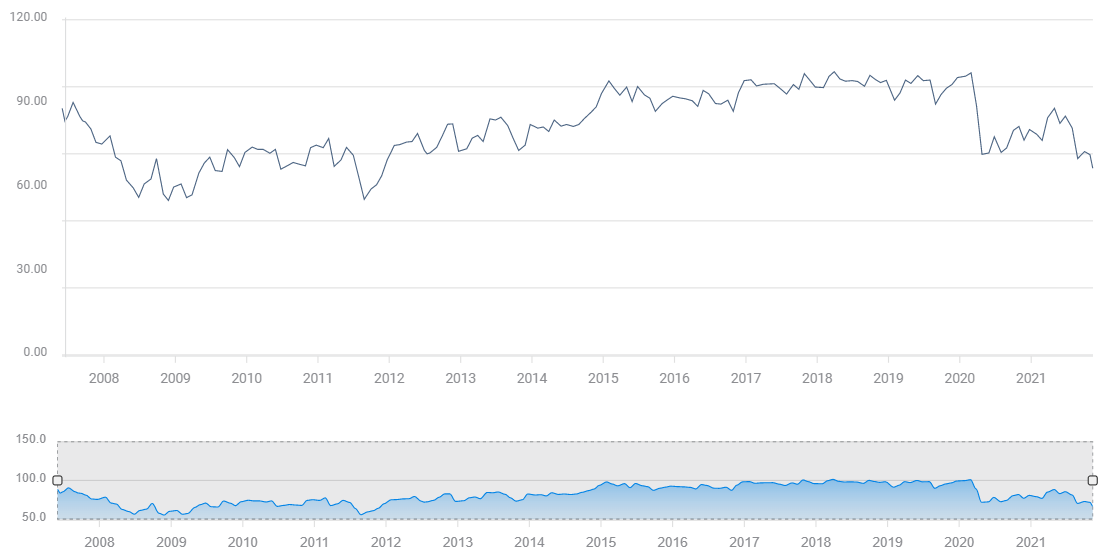 Initially, it seemed that the collapse might have been due to the labor market. Nonfarm Payrolls in August had dropped to 366,000 from 1.091 million in July. The NFP weakness continued in September with 312,000 hires.

Other labor market statistics indicated that the lack of hiring was not a lack of jobs but a reluctance by many workers to return to employment. The Job Openings and Labor Turnover Survey (JOLTS) averaged 10.4 million open positions in August and September, the second highest two-month period on record.

A record 4.4 million workers left their jobs in September. Workers leave employment when they are confident of a new job and usually when they are seeking higher wages.

These labor market statistics suggest that worker shortages and consumer demand have swung the hiring balance distinctly in employees favor. Given the number of positions on offer and the voluntary job changes, it seems unlikely that the labor market is the reason for the plunge in consumer attitudes.

Inflation is a different story. From March to October, the Consumer Price Index (CPI) has more than doubled from 2.6% to 6.2%. The annualized rate for the six months from May is 7.2%. In June and October prices jumped 0.9%. That is an annualized rate of 10.8%.

If you track CPI back 30 years there are only two other months when CPI rose 0.9% or more. Four months out of 360 and two of those months are current. The economic reality is even more difficult for most families because the inflation rate for many necessities, particularly cars, gasoline, fuel, housing and many foods, has risen even faster than the overall inflation rate.

The Federal Reserve prefers to measure inflation through the Core Personal Consumption Expenditures Price Index (Core PCE). This measure excludes food and energy costs on the notion that their volatility does not reflect general inflation trends. While the PCE Price Index may more accurately reflect econometric reality, the economic consequences of elevated inflation are determined by its impact on the consumer. Families pay the headline rate, not the core.

For most households across the country, wages are losing to inflation.

Average hourly earnings rose 4.9% year-over-year in October. Annual CPI that month was 6.2%. A family's purchasing power dropped by the 1.3% difference in October alone.

Over the half-year, wage gains have averaged 0.4%, inflation has measured 0.6%. The difference is 1.2% for six months and 2.4% if maintained for a year. Wage increases have not been higher than CPI since March. Consumers have lost purchasing power, income, to inflation for seven straight months.

Americans know that plentiful employment cannot make up for inflation because wage increases or job changes are infrequent and difficult. Inflation erodes buying power more rapidly than even the most desperate employer will raise wages. Inflation, not unemployment, is the source of consumer unhappiness.

Economic growth in the US dropped sharply in the third quarter to 2% annualized after 6.5% in the first half.

The Federal Reserve has been planning the taper since at least May when the first mention of ending the bond program made it into the minutes of the April FOMC meeting. Although market taper expectations have waxed and waned over the past six months, the Fed waited until economic growth revived before announcing the bond program reduction.

The Atlanta Fed’s GDPNow model raised its growth estimate for the fourth quarter to 8.7% from 8.2% after the October Retail Sales figures. The best insurance for the Fed tightening policy is an active, employed and solvent US consumer.

Fed monetary policy needs the economic support only the American consumer can provide. If the US recovery were to fade back to 2% or less, the FOMC would be hard pressed to maintain its tightening campaign.

Should inflation outpace wages for any appreciable time, the restriction on consumer spending would be a direct threat to economic growth. The great and the good of the economic world can be thankful that average Americans have decided to ignore the damage inflation is doing to their paychecks. For the time being, at least.

*October 2001 saw a 6.7% jump in sales but this was due to an adjustment in the US Census statistical procedures.

AUD/USD loses the 0.7100 threshold as focus shifts to data Premium

AUD/USD edged lower on Monday, maintaining the negative bias in early Asia, hinting at further slides ahead. Australian Retail Sales and Chinese NBS PMIs coming up next and set the sentiment for the next few sessions.

EUR/USD pierces 1.0850 as demand for the US Dollar prevails Premium

Risk aversion dominated the FX board at the beginning of the week, with EUR/USD sliding below 1.0850 by the end of the American session. Caution ahead of central banks’ announcements and the soft tone of global indexes backed the Greenback.

The Dollar is poised for a run

This week has all the makings of being vital for the coming weeks and months, with the most important publications for the market in focus.