A euro crisis has been brewing for years.

Eurozone officials and the ECB have long held the upper hand vs individual countries like Greece and Portugal.

However, Italy now has the upper hand, if it chooses to wage war.

Let's backup and start from the beginning to tie this story together.

The European Commission could impose a 3 billion euro fine on Italy for breaking EU rules due to its rising debt and structural deficit levels, the country’s Deputy Prime Minister Matteo Salvini said on Tuesday.

Salvini, whose far-right League party triumphed in European elections on Sunday, said he would use “all my energies” to fight what he said were outdated and unfair European fiscal rules.

“Let’s see if we get this letter where they give us a fine for debt accumulated over the past and tell us to pay 3 billion euros,” Salvini said in an interview with RTL radio. 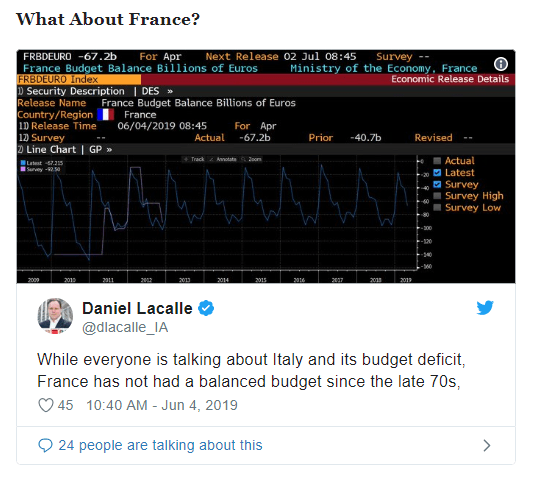 “I don’t govern a country on its knees,” said Matteo Salvini after sweeping the European elections even more emphatically than the Brexit party. Note the majestic ‘I’. He is already master of Rome.

The Lega strongman can no longer be contained, even by Italy’s ever-ingenious mandarin class. His party commands 40pc of the country together with eurosceptic confederates from the Brothers of Italy. It has erupted like a volcano in the Bourbon territories of the Mezzogiorno, now on the front line of migrant flows and left to fend for itself by Europe. Salvini can force a snap-election at any time.

By some maniacal reflex the dying Commission of Jean-Claude Juncker has chosen this moment to draw up the first indictment letter of the revamped debt and deficits regime. Italy faces €3.5bn of fines for failure to tighten its belt. It has 48 hours to respond.

“We’re not Greece,” said Claudio Borghi, Lega chairman of Italy’s house budget committee. “We are net contributors to the EU budget. We have a trade surplus and primary budget surplus. We don’t need anything from anybody. And we are in better shape than France.”

“I am not going to hang myself for some silly rule,” said Salvini. “Until unemployment falls to 5pc we have a right to invest. We have regions where youth unemployment is 50pc. We need a Trump cure, a positive fiscal shock to reboot the country.” His plan is a €30bn boost led by a flat tax of 15pc.

The concerns over Italy have hit mainstream media in the EU, but not the US. For example, please consider German Bundesbank Comes Clean on Euro Default Risks After Italy's 'Parallel Currency' Decree

The German Bundesbank has warned that it could face heavy losses if a major country leaves the euro and defaults on debts to the European Central Bank system, but warned that any attempt to prepare for such a crisis could backfire by triggering a speculative attack.

The analysis is highly sensitive coming just days after the insurgent Lega-Five Star government in Italy passed a decree in the Italian parliament authorizing the creation of a parallel payments system known as ‘minibots’, a scheme decried by critics as a threat to the integrity of the euro and potentially a ‘lira-in-waiting’.

While the Bundesbank text sticks to the standard line that a euro break-up is hypothetical it nevertheless admits - after years of obfuscation - that the ECB’s internal Target2 settlement system entails inescapable costs for Germany and other EMU member states should it ever happen. It also gives the impression that the monetary authorities have no clear strategy for handling such a crisis.

Professor Philip Turner, a former monetary official at the Bank for International Settlements, said the politics of Target2 are poisonous. “This is lending on a huge scale that no government has approved. It is covering fundamental imbalances at the heart of the eurozone system, and it can’t go on indefinitely,” he said.

The International Monetary Fund says it would be hard to prevent a sovereign debt crisis in Italy engulfing Spain and Portugal. The ECB could therefore face a Target2 crisis approaching €1 trillion if Italy’s rebel government sets off a chain reaction with its ‘minibot’ notes - which it claims are needed to cover €52bn of state arrears to Italian contractors and households.

The Bundesbank’s text states that if a country leaves EMU and its central bank defaults on Target2 liabilities, the ECB will have to eat through a series of buffers: first its own capital - dramatic enough - and then by drawing in money from the remaining central banks on a ‘capital key’ basis.\

There is not a single thing shocking in the preceding analysis other than the discussion is finally taking place at top levels.

About one year ago, I commented a Reader From Italy Chimes in on the "Minibot" Parallel Currency Idea.

Regardless of anything else: Italians are masters in finding smart ways to circumvent rules. There is even an adage in Italy regarding this.

On that basis, I would not be surprised if at one point in time, someone in Brussels or Frankfurt will realize too late precisely what is happening. .....

This was my reply to reader "AC":

Germany gets to decide between debt mutualization or a breakup of the Eurozone and Italian default on Target2 imbalances. The only other possibility that comes to mind is the ECB prints enough to backstop Target2. 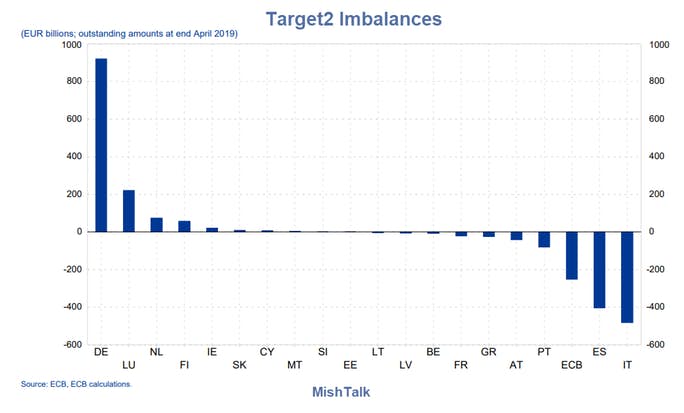 The above numbers have not changed that much in the past year.

What Has Recently Changed?

The answer is amusing.

To prevent Beppe Grillo and his 5-Star movement from coming into power, Italy changed its election rules to give coalitions more power than parties.

The result is Salvini might win so much support in the next election that he may have a super-majority in Parliament so as to not need a referendum to launch the mini-bot parallel currency.

And so, here we are.

Italy owes creditors close to half a trillion euros. If Italy defaults, the rest of the countries have to pick up the tab based on GDP percentage weights. 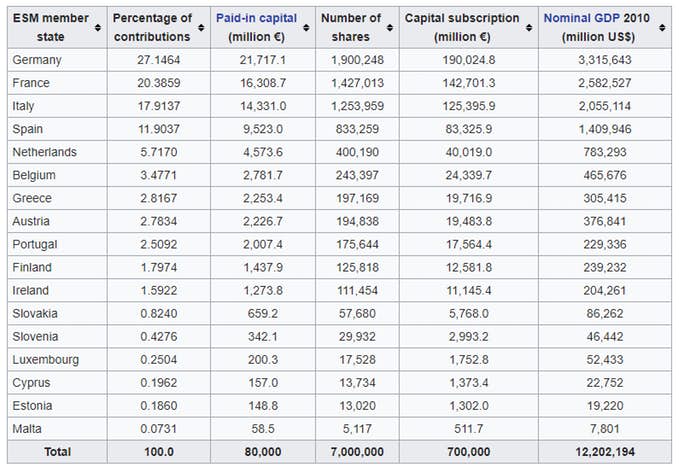 Curiously, via ESM Rules, if Italy were to default, Italy would be responsible for 17.91% of the tab.

Spain, which already has a Target2 liability of €403 billion would be responsible, in theory, for picking up 11.9% of €481 billion, but that doers not count the 17.9% that Italy would of course not pay.

With Greece and Portugal, the ECB had the upper hand.

Who has the upper hand here?

I suggest Italy and I hope Italy uses it.

GBP/USD is trading above 1.30 after UK wage figures beat expectations with 3.2% annually. The unemployment rate remained at 3.8% in November.

EUR/USD is trading around 1.11 after the German ZEW Economic Sentiment beat with 26.7 points. Presidents Trump and Macron agreed not to slap tariffs on each others' countries.