S&P 500 is in consolidation mode, underpinned by the Fed liquidity inflows. The mid-July dip has been readily bought, and the ascent‘s steepness bodes well for the bulls. No need to be spooked by the tech weakness or valuations just yet – with the Fed having the markets‘ back e.g. via the newly introduced $500bn backstop or repo market interventions, the buy-the-dip crowd will wake up to any discounts like Pavlovian dogs to a bell.

As market breadth is on the mend, the VIX is still making lower highs and lower lows – the July winds though have changed that dynamic a little. Summer doldrums are about volatility, which is justifiably keeping the stock bulls on edge in the last few days. While the Fed‘s bluff has been called and the inflation / reopening trades haven‘t gone the way of the dodo bird, some caution is in place if you‘re also focused on portfolio performance (see the upper third of my homepage) – my Jul 06 words are valid also today:

(…) Little wonder when all the central bank did, was influence inflation expectations, and precisely nothing about current inflation – let alone pressures in the pipeline. I‘ve discussed the cost-push pressures building up, leading to inflation becoming unanchored. Add job market pressures beyond the difficulties in hiring, and the issue grows more persistent. While it‘s not biting overly noticeably for the financial markets to take notice the way they did in Mar and early May, left unattended, inflation would come to bite in the not so distant future. The takeaway is that with the constant redefinitions of what transitory should mean now, the concept of Fed as inflation fighter is subject to well deserved mockery.

Look for the lull in Treasury market to continue, it‘s almost goldilocks economy as the monetary and fiscal support rivals wartime footing circumstances. Makes you wonder what would be on the table if we were faced with a recession. Thankfully, that‘s not on the horizon – we‘re in a multi-year economic expansion that won‘t end with the tapering or tightening games this year or next, not in the least.

The economic expansion is set to continue, and Treasury yields aren‘t signalling an impending recession. The Fed is ill-positioned to withdraw liquidity the way it attempted to in 2018, which means that asset price inflation is here to stay – both in the paper and real assets. I‘m still looking for more gains in stocks, precious metals and commodities in general as the tapering / tightening June drama has worked as much (cheap) magic as it could have already. Inflation expectations are tame at the moment, but look for inflation to be way stickier that the pundits see it to – apart from all the arguments I have made in the weeks and months before, there is the real estate market and owners' equivalent that‘s making up roughly a third of CPI. The dollar though looks range bound – I‘m not looking for it to break to new lows any time soon.

Gold is well suported by retreating real rates, and the miners‘ underperformance is slowly getting better. I‘m not too worried by the underperforming silver at the moment – the white metal is notorious for its fake shows of weakness, on time frames higher and lower. The commodities bull train (star performer copper – I hope you‘re also enjoying sizable long profits in the red metal that I‘m covering in newly introduced Copper Trading Signals).

Oil is a mixed bag with the oil sector and energy underperformance, but that‘s no obstacle to riding enormous open long profits from my Jul 19 call. Triple digit oil looks set to have to wait till next year – I‘m looking for $80 to be reliably capping the upside for now as OPEC+ is (should be) also aware of demand destruction should prices rise too high.

Cryptos have sprung to life over July, and the continued Ethereum outperformance bodes well. Considerable patience is still needed though before we can talk of bull trend resumption – but the worst certainly appears to be over. 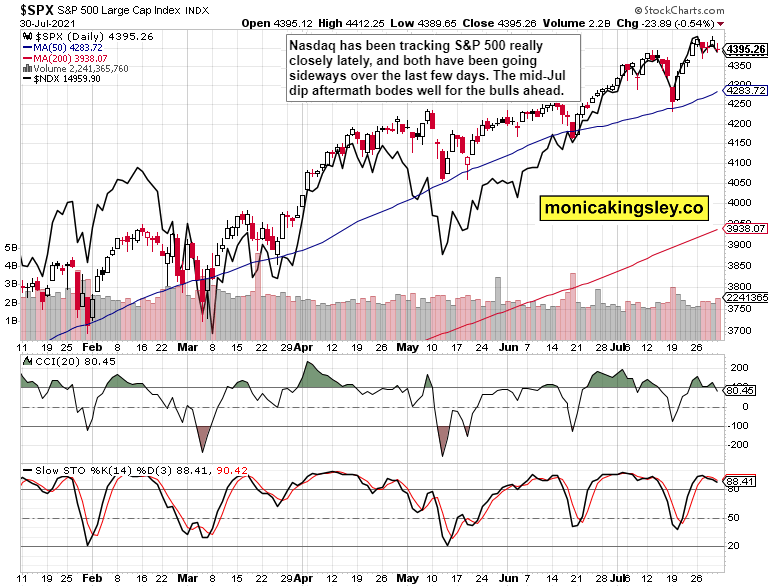 S&P 500 isn‘t offering conclusive short-term clues either way, which is why I prefer waiting for an opportune entry point (remember my portfolio focus) – the bears would try their luck this month definitely, but I‘m not looking for their lasting success.

Credit markets performance remains generally supportive – in spite of HYG lagging behind, and Friday‘s whiff of risk-off trading. Encouragingly, TLT is starting to lag behind in the medium run, and that carries implications for growth and interest rate sensitive sectors.

Tech heavyweights are taking a noticeable breather, but the rest of the crowd is stepping in – and that equals rotation, still more juice in the reflation trades.

Gold hasn‘t rolled over, far from it – I look for the slow and steady march higher to continue in the medium term. Miners are improving, and Friday‘s show of strength would deserve a companion one of these days too. I‘m still looking for miners to confirm the upcoming gold advance.

Silver and copper are diverging, and I look for it to be resolved with the white metal‘s upswing eventually, just as various Treasury or real assets to Treasury ratios point to. 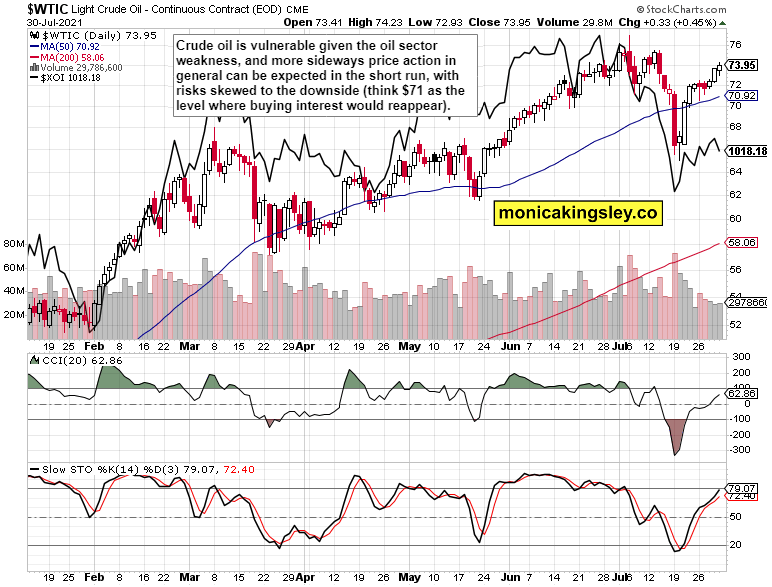 Black gold is perched a bit too high after the strong rebound, and upcoming energy sector performance would help the commodity tremendously. Keep the price appreciation expectations tame though – crude oil will do better next year.

S&P 500 remains in a bull market, with no signs of having topped out. As volatility looks to be picking up, expect quite a few buying opportunities in the days and weeks ahead.

Gold and silver bulls‘ patience is getting tested, but the underlying dynamics behind the bull run are unbroken. Silver would join the yellow metal in rising, and miners‘ springing back to life on a more consistent basis, would be a key sign to watch for.

Crude oil lacks the strength to take on $80 at the moment, let alone $75, and sideways trading looks likely to rule the coming days and probably weeks.

Bitcoin and Ethereum bulls have done a great job thus far, and the accumulation hypothesis has been almost fully confirmed by now – taking out 44,000 in Bitcoin is what would provide the final confirmation.