Yesterday’s signals produced a long trade from the bullish inside candlestick on the hourly chart which rejected the support level at 0.7066. Unfortunately, I think this trade looks unlikely to end well so it may be wise to close it as it is currently near break-even.

Trades must be taken from 8am New York time Tuesday to 5pm Tokyo time Wednesday.

I wrote yesterday that although we were seeing a slow move down over recent days, I still thought we were more and more likely to get a major bullish reversal the closer we get to 0.7000 or any of the three support levels above it. So, I would take a bullish bias if there is a strong bullish move from any of these support levels later today. This was an OK to some extent as we did get a bounce at the nearest support level right to the pip, but it looks as if it will not follow through, with the price held down by the short-term bearish trend line which is shown in the price chart below. This leaves a mixed picture, but I would be more inclined to be bullish if the price rises from this supportive area to break the trend line and get established above 0.7100 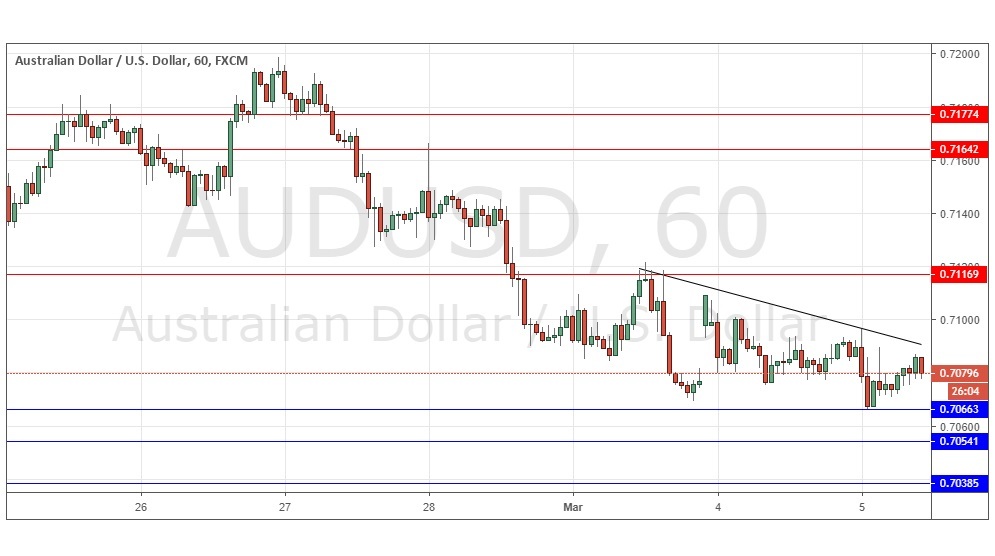 There is nothing of high importance due today concerning the USD. Regarding the AUD, the Governor of the Reserve Bank of Australia will be giving a minor speech at 10:10pm London time, followed by the release of GDP data at 12:30am.