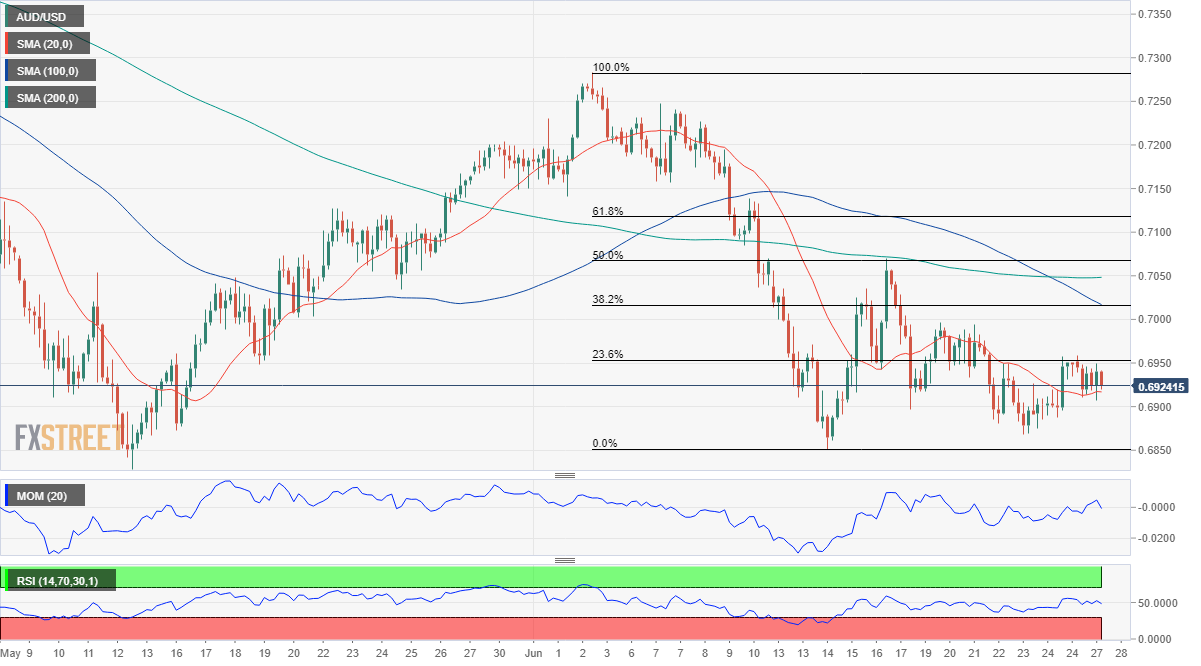 The AUD/USD pair approaches the 0.6900 mark, down on Monday after a positive start to the week. The American dollar started the day on the back foot but managed to post a modest comeback mid-US afternoon. Market participants are struggling for direction amid inflation and recession concerns and ahead of US inflation figures to be released later in the week. At the same time, investors' attention will be on the Central Banking Forum hosted by the European Central Bank, as multiple policymakers will make public appearances and could refer to future monetary policies.

The pair is down despite modest gains among US indexes, which are barely enough to prevent a steeper slide. Wall Street is fighting to remain away from the bearish territory, a tough one amid recession fears. Meanwhile, the Australian economic calendar will remain empty until next Wednesday, when the country will release May Retail Sales, which is seen up at a modest 0.4% MoM.

The AUD/USD pair peaked at 0.6958, meeting sellers around the 23.6% retracement of its latest daily decline between 0.7282 and 0.6855 in the 0.6950 area. The daily chart shows that bears keep control of the pair as it is developing below its moving averages, with the 20 SMA heading south at around 0.7050. Technical indicators remain well below their midlines, although lacking directional strength.

In the near term, and according to the 4-hour chart, the pair offers a neutral-to-bearish stance. AUD/USD has spent the day consolidating between the aforementioned Fibonacci level and a flat 20 SMA, providing intraday support at 0.6910. Technical indicators have turned marginally lower but remain within neutral levels. Critical support comes at 0.6850, June monthly low. The bearish case will be firmer if the pair breaks below it.