The RBA raised its policy rate by 50 bps on Tuesday to 1.85% - its fourth consecutive hike and the steepest in nearly 30 years. But that’s done little to lift AUD/USD, which at the time of writing was down by nearly 1% from the start of the week. This once again leaves the pair trading below the key psychological level of 0.70. Granted, the recent flare up in tensions between China and Taiwan have contributed to a weaker Australian dollar, but some of the same factors I outlined in early July, in my opinion, have been the primary driver behind this latest move lower.

In particular, Tuesday’s guidance from the RBA that near-term future hikes may not be so steep as the one this week was likely the overarching factor behind the fall in AUD/USD. Even the RBA admits that it is walking a tightrope in terms of trying to cool inflation, which hit  6.1% in Q2 without severely impacting the Australian economy. Meanwhile, a cadre of Fed speakers this week haven’t given any indication that Fed is looking to ease up on raising interest rates. As things currently stand, the RBA, like many other major central banks, doesn’t appear capable of keeping pace with the Fed in terms of policy tightening.

The current fundamental backdrop also very much mirrors the technical setup. AUD/USD is trading below the 200-day exponential moving average, indicating the pair is more biased toward a downtrend. Structurally, a case can be made that the 3 June swing high of 0.72830 marks the last corrective move before the prior to the last impulsive swing low of 0.66816. If so, Tuesday's substantial decline may very well represent a rejection of the intervening 50% Fibonacci resistance level of 0.68923. If so, that would portend a further fall in AUD/USD. 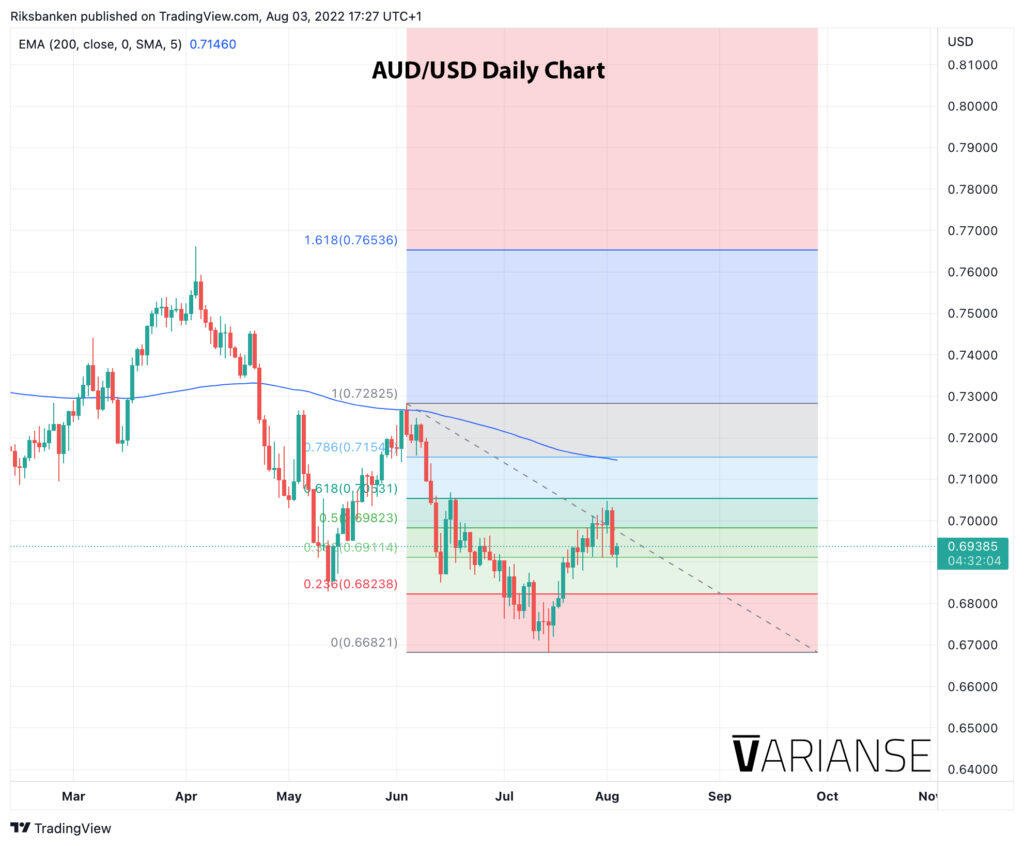 Those brave enough to consider buying, might wait for price to pierce and successfully retest the 1 August high of 0.7040. A sustained break above that level, followed by subsequent break above 0.72830 would provide greater confidence that the pair was headed in another direction. Any such move, however, would likely come commensurate with a more positive shift in general market risk sentiment.