One meeting at a time – that is how the Federal Reserve has vowed to operate in an uncertain world. For markets, it means every data point matters more than usual, and action becomes wilder when two top-tier figures are published within less than two hours. Here is my playbook for the two events.

The first to come out is ADP's private-sector jobs report for September. America's largest payrolls firm resumed releasing its labor market reports last month after a summer break meant to improve the data quality, or at least the correlation with the official Nonfarm Payrolls report. That has yet to work out.

The figures missed estimates in August, May and April:

The economic calendar shows an expected increase of 200,000 jobs in August, which seems modest in comparison to 315,000 positions created in the previous month. Given ADP's recent track record, any positive number would be considered satisfactory, as it would indicate an upbeat official figure as well.

After several sessions of dollar weakness, a strong – or even a less than horrible – report would be sufficient to trigger a bounce in the greenback.

The ADP NFP is out at 12:15 GMT, and at 14:00, the ISM Services Purchasing Managers' Index (PMI) is out. Expectations are high: the headline is set to hold up at 56, a healthy distance from the 50-point threshold that separates contraction from expansion. The most forward-looking component of this future-leaning survey is New Orders. It is projected to slide from the high level of 61.8 to 58.9, still a strong point.

Even the Prices Paid component carries elevated estimates of holding at 69.8 points. Given that the Fed watches such inflation expectations gauges closely, and without a drop towards or below 50, it will continue raising rates.

If these high estimates may still be surpassed when examined on their own, the comparison with the ISM Manufacturing PMI gives pause for thought. That report, published on Monday, showed the inflation component sliding to 51.7. It is hard to see how an 18-point gap is maintained between the two sectors.

The ISM Services PMI Prices Paid component has been too high for too long: 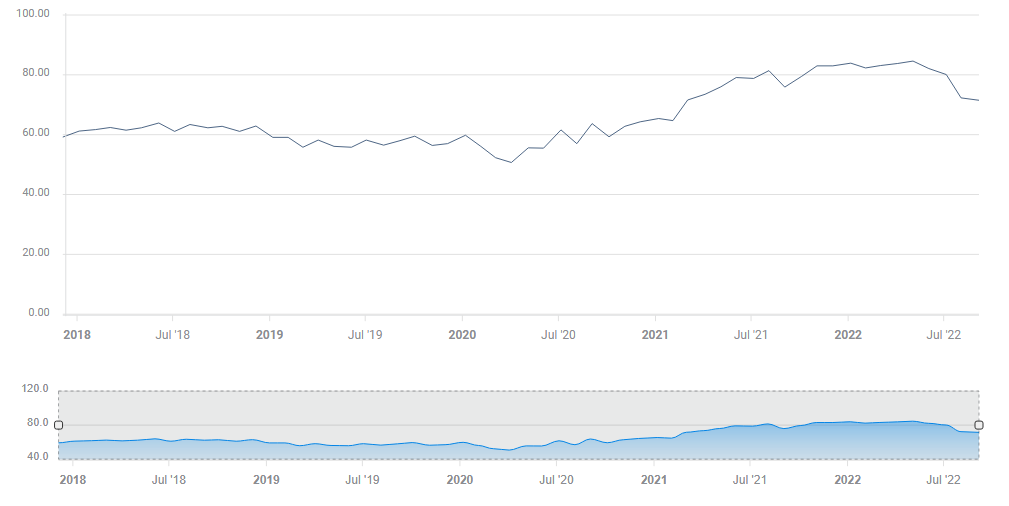 I think that high expectations from this forward-looking survey for America's biggest sector open the door to a disappointment that would down the dollar – a repeat of Monday's greenback grind. That fall could be harder from a higher point, if ADP's data has provided a boost.

Volatility in markets is set to remain high until the Fed clearly signals it is slowing down the pace of rate hikes. A lower-than-expected hike in Australia and Britain's U-turn are insufficient – they are only the latest twists in the roller-coaster. Trade with care.