The cost of living in the UK as represented by the Consumer Price Index (CPI) for April month is due early on Wednesday at 06:00 GMT. Given the recent whipsaw of price data in the last two months, coupled with the Bank of England’s (BOE) emphasis on CPI to dial back the bond purchase and reflation fears in the US, today’s data will be watched closely by the GBP/USD traders.

The headline CPI inflation is expected to jump to 1.4% from 0.7% prior on an annual basis while the Core CPI, which excludes volatile food and energy items, is likely to improve from 1.1% previous readouts to 1.3%. Talking about the monthly figures, the CPI could double from 0.3% prior to 0.6% during April.

In this regard, analysts at TD Securities said,

"The UK inflation data may be watched a bit more closely than usual, with markets waiting to see if the UK data shows any of the same surges that we saw in US CPI for April."

Readers can find FXStreet's proprietary deviation impact map of the event below. As observed, the initial market reaction is likely to remain confined between 15 and 80 pips in deviations up to 2 to -3. The same suggests the importance of the key inflation data for GBP/USD pair traders. 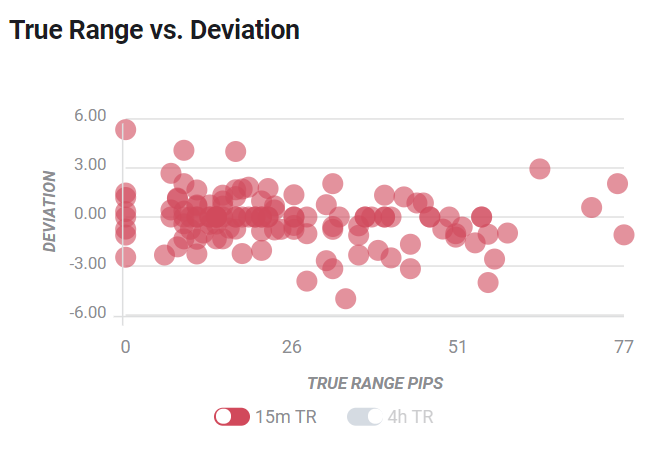 GBP/USD bounces off intraday low, near the yearly top, while picking up bids near 1.4190 during early Wednesday. The cable jumped to the fresh high since February 24, also the highest in a year, as broad US dollar weakness joined upbeat UK jobs report and BOE comments. However, chatters concerning the Indian variant of the covid and pre-FOMC caution seem to probe the bulls amid a light calendar and feeds afterward.

Looking forward, early signals for the UK CPI have been optimistic and can keep GBP/USD directed towards the north. In a case where the inflation figures disappoint, the pessimism will be comparatively weaker than the US, which in turn keeps the pair firmer ahead of today’s US Federal Open Market Committee (FOMC) meeting minutes.

Technically, A daily closing beyond the early month top, as well as February 25 high, respectively around 1.4165 and 1.4185, enables GBP/USD bulls to probe the yearly peak surrounding 1.4245.