Here is what you need to know on Tuesday, July 6:

Markets remain in a record-breaking mood as traders show no sign of 4th of July hangovers. GOOGL surged to a record high close on Friday, and most mega tech names remain at or close to all-time highs. Apple (AAPL) is surging nicely through some key resistances, the latest being $137 as it too targets new highs, see more. Another mega tech name heads for the moon and looks to get there before AMC as Jeff Bezos officially hands over the CEO reins to Andy Jassy while Bezos heads for a spaceflight later this month on his Blue Origin venture.

Chinese names are not expected to perform well as the market reopens on Tuesday following the July 4 celebrations. China is conducting further crackdowns with the emphasis this time on DiDi Global (DIDI), who launched on the NYSE only a week ago. The ridesharing stock dropped as much as 25% in Tuesday's premarket as China conducts a cybersecurity review of the company and new app downloads are banned in China. Most Chinese-related stocks are down in Tuesday's premarket, and Alibaba (BABA) investors get a sense of deja-vu.

Oil continues to surge as OPEC+ appears to become OPEC- as haggling between Saudi Arabia and the UAE continues. Saudi Arabia has raised oil prices for the US and Europe while Russia looks on, with President Putin reportedly having no plans as of yet for OPEC+ discussions, according to the Kremlin.

Oil is at a multi-year high of $76 for WTI, the dollar is higher at 1.1840 versus the euro as the German ZEW survey was a shocker, 63.3 versus 75.2 expected. Bitcoin is hanging tough at $34,100 despite the Beijing branch of the Central Bank of China putting curbs on crypto promotion.

European markets are modestly lower with the EuroStoxx flat, FTSE -0.2%, and Dax -0.3%.

DIDI down 20% premarket, Full Truck Alliance (YMM) down 18%, and Kanzhun (BZ) down 10% on Chinese regulatory concerns.

Weibo (WB) up 28% premarket on rumours of the company being taken private.

Ironwood Pharma (IRWD): rumours of a takeover, shares up 4% premarket.

Dominos Pizza (DPZ): Citigroup not hungry for the stock as it downgrades to neutral.

JNJ is to begin covid vacine study on teenagers in Autumn. 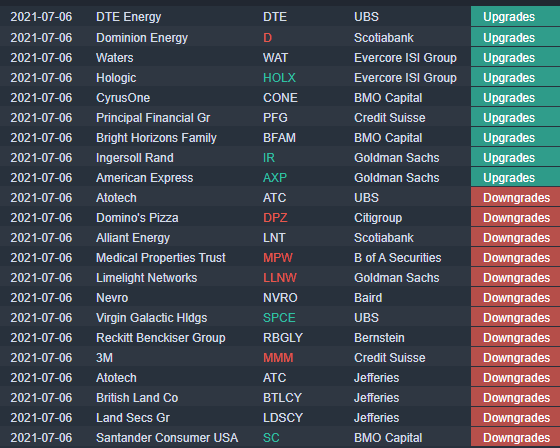