Update May 31: Virgin Galactic Holdings Inc (NYSE: SPCE) has eeked out another minor increase of 0.45% in the last trading day of May and ahead of the Memorial Day weekend. Richard Branson's company has more than doubled in value since the trough of around $15 recorded in the middle of the month but needs another doubling to hit the 52-week high of $62.80. Can shares move even higher? A new month brings new energies with it, but also profit-taking.

Virgin Galactic returned to space last weekend and this week has seen the shares soar, excuse the easy pun. AMC though clearly looks to be headed for the moon or even mars, the way the shares are surging again in Friday's premarket. Last weekend, SPCE completed a successful space flight of its VSS Unity spacecraft from New Mexico.

Michael Colglazier, CEO of Virgin Galactic, said that the flight “showcased the inherent elegance and safety” of the company's spaceflight system. Colglazier added that Virgin “will immediately begin processing the data gained from this successful test flight.”

Virgin Galactic fulfilled a number of test objectives during the flight, including collected data to be used for the final two verification reports that are required as part of the current FAA commercial reusable spacecraft operator’s license. It is this statement regarding verification reports and receiving an FAA license that grabbed the attention of most investors.

SPCE shares jumped 27% on Monday closing at $26.89, immediately following the weekend test flight and the momentum just kept on going as the week progressed. At the time of writing, SPCE shares are up to $31.50 in the premarket. The test flight was well received by investors and analysts alike with Cannacord Genuity starting coverage of SPCE shares on Wednesday with a buy rating and a $35 price target.

Virgin Galactic shares obviously surged after last weekend's successful test flight and briefly stalled at the gap zone identified in the chart. FXStreet had identified this in advance as a target resistance. This level also corresponded with the 200-day moving average.

Thursday's retail rally across most meme stocks set the boosters to full under SPCE shares and they duly broke out of this zone and launched up to the 100-day moving average resistance. Breaking the 100-day would see a push to the $36.36 resistance which is the high from mid-March. The market loves to fill a gap and the neat symmetry around this would send SPCE up to the next gap zone at $40. It worked for the previous gap so why not here. With the current fizz returning to the meme stock space this is not too stretched a target.

The bullish trend is held in place by the channel breakout so SPCE needs to clearly stay above this and not create a lower low so the $18.06 level is key to keep the bullish trend in place. Some of the momentum oscillators are beginning to look a little overbought but nothing too alarming just yet. The Relative Strength Index is close to overbought as is the Commodity Channel Index and the Willams %R actually is in overbought territory. In powerful trends, these can remain in the overbought zone for some time but these indicators combined are powerful so keep a cautious eye on these and manage risk carefully as always. 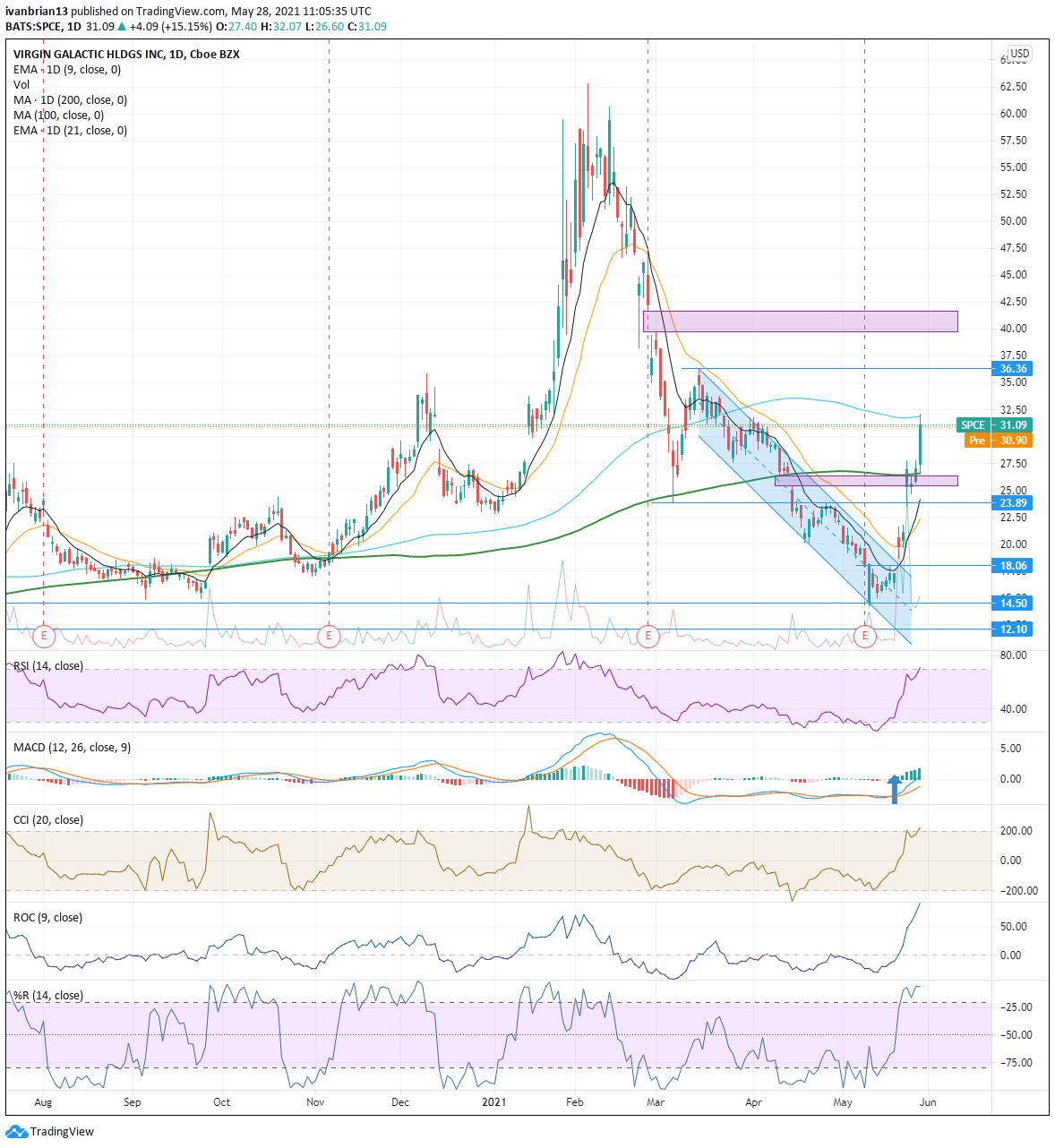