Update after the close: Really we have been calling this one so well we should be lazying on a boat in the Caribbean, socially distant of course! Tesla stock reacted negatively to higher levels on Wednesday as an initial 1% gain was short-lived. TSLA closed just slightly lower at $679.70. This consolidation is exactly what we had predicted after the explosion though $635 (which we also predicted, ahem!). Given the decent volume from $670-715 the move was more likely to slow. This volume profile does not thin out until the stock gets above $715.

Update: Tesla stock retraces almost to the tick Tuesday's losses in the first hour of trading on Wednesday. In the process confirming our prediction of heavy traffic once it broke above the $667 resistance. Consolidation can be a good thing as the stock regroups to push higher. A small gap has formed between $657-667 and markets love to fill a gap so this pothole may need filling before further gains are on the cards. Note also the RSI being overbought for the Nasdaq index so we would really like this to rectify before pushing higher.

Tesla stock had a relatively calm and quiet day on Tuesday as the shares retreated just over 1%. The bullish trend had been gradually gaining momentum with some pretty spectacular moves along the way. TSLA shares exploded through the $635 level we had identified at FXStreet and then pushed on to the next resistance at $667. The volume profile has demonstrated its worth to key analysis and makes for some important options plays. The volume profile shows the amount of buying and selling volume at each price point and charts this on the right of the chart, with red and green representing buy and sell volume. We all know how important volume is to confirm breakouts, etc. But a lack of volume can be even more powerful. If a level such as the $635 one can be identified with a lack of volume and the potential for a price acceleration, this can make for a very useful options strategy.

Options derive value from how much in or out of the money they are but also from volatility in the underlying instrument or stock. If a stock suddenly explodes through a level due to a lack of volume, volatility jumps and so do options valuations.The Nasdaq has been the main driver of equity markets over the last few weeks, and Tuesday saw that that trend continue. Facebook surged 4% on Monday on the back of a favourable ruling from the federal court against the Federal Trade Commission.

Tesla also performed admirably on Monday despite some potentially negative news. Chinese reports over the weekend had Tesla recalling some 300,000 vehicles due to a software issue – the perfect fuel to ignite bears and push the recent gains back. But the stock completely overlooked the news to surge higher on Monday and close up 2.5% at $688.72. It is not too much of a surprise when some consolidation and profit-taking hit home in both names on Tuesday.

News that Tesla is recalling up to 300,000 Chinese-made and imported Model 3 and Model Y cars hit the tape on Saturday. Chinese regulators said the move is linked to assisted driving, which drivers can activate accidentally. The recall is for software and is remote, according to Reuters, so may not be as big an issue as the headlines would lead one to believe. The reaction on Monday was certainly positive with TSLA shares registering a 2.5% gain.

The speed of the move has slowed, and this is due to the heavy volume profile we previously identified in this $670-715 zone. Any push higher will be more gradual. Once above $715 though the volume profile thins out quickly, meaning a move to $780 should not meet too much resistance. But the Nasdaq looks to be struggling for momentum also with the Nasdaq's Relative Strength Index (RSI) in the overbought zone, so any gains may be a struggle.

The risk-reward is still favouring a continuation of the bullish trend but at a slower pace, and the worrying thing to look out for is the opening gap from Wednesday to Thursday, $657 to $667. Markets love to fill a gap. This would though make a nice entry point for a fresh long as it would remain above the 9-day moving average and, therefore, not do too much damage to the bullish trend in place. $635 holds the short to medium-term bullish trend in place. A break below is strongly negative. 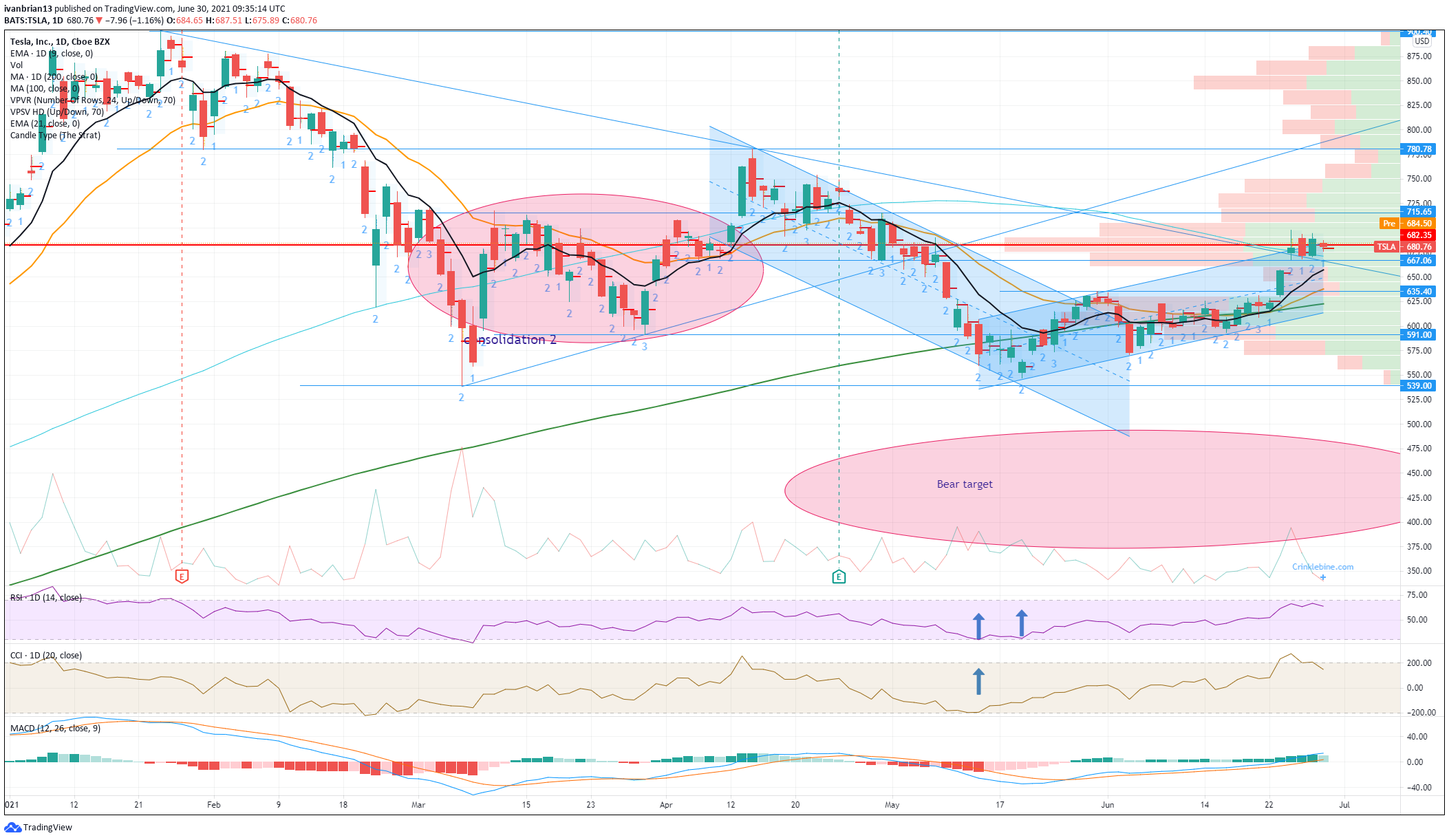