Silver extended the previous day's retracement slide from one-and-half-week tops and witnessed some follow-through selling on the first day of a new trading week. This marked the second consecutive day of a negative move and dragged the commodity to two-day lows, around the $27.70 region during the early European session.

From a technical perspective, last week's positive move faltered near the $28.25-30 region, marking a short-term ascending trend-line support breakpoint, now turned resistance. This should now act as a key pivotal point for short-term traders and help determine the next leg of a directional move for the XAG/USD.

Meanwhile, technical indicators on hourly charts have been drifting lower in the bearish territory and support prospects for additional intraday weakness. That said, oscillators on the daily chart – though have been losing the positive momentum – are yet to confirm a bearish bias and warrant some caution for traders.

Hence, any subsequent fall is more likely to find decent support near the $27.40 region, or the lower boundary of a near one-month-old trading range. This is followed by the $27.20 horizontal support and the $27.00 mark, which if broken might be seen as a fresh trigger for bearish traders and prompt aggressive selling.

The next relevant support is pegged near the $26.60 area. Some follow-through selling might turn the XAG/USD vulnerable to accelerate the fall further towards the $26.00 mark. The downward trajectory could further get extended towards challenging the very important 200-day SMA, currently near the $25.75-70 region.

On the flip side, the $28.00 mark now seems to act as an immediate strong resistance ahead of the $28.25-30 supply zone. Sustained strength above has the potential to push the XAG/USD towards monthly tops, around the $28.75 region. Bulls might eventually push the commodity beyond the $29.00 mark, towards testing the $29.40-50 hurdle. 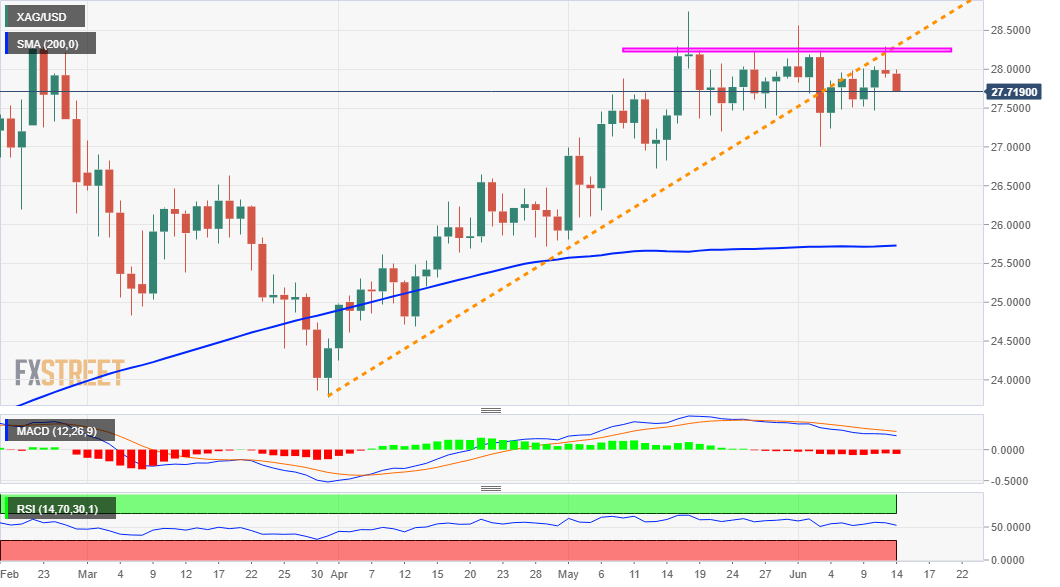