Rivian (RIVN) stock finally made its much-anticiapted debut on the Nasdaq exchange on Wednesday as the frenzy over the electric vehicle manufacturer reached fever pitch. The stock took its time to open as the sheer volume of orders likely necessitated several delays but it eventually opened at $106.75 just around 1300 EST. Volume was understandably huge, and the stock was trending across mainstream and social media platforms thoughout the day.

The IPO raised nearly $12 billion and by our estimates positioned it as the fifth largest US IPO ever. Reports had put it in the top ten earlier, but as the IPO price was constantly revised upwards so too did its ranking. Having started out with a range in the high $50s and then increased to a $73 midpoint, Rivian eventually IPO'd at $78. Interest was sky high from retail investors though, and once the call or quote phase opened on the Nasdaq exchange, it became clear that this one was going to run and run. After some time RIVN stock eventually opened at $106.75 on volume of over 10 million shares.

Trading and investing are two separate things. While we outline what we feel is a stretched valuation above, trading is more short-term and focused on momentum. That makes Rivian interesting as momentum and swings will likely be strong here. However, always use stops or strong risk management. Now we should also note that recent blockbuster IPOs will often present a better opportunity to get in if you wait for some time. Facebook (FB) tanked after its IPO. LinkedIn opened at $83, but you could buy it for $63 a few months later. Even this year Roblox was recently listed at $64.50 and it is only this week that the stock has pushed significantly higher.

The point is just at the time of listing or IPO is when interest is highest. This is when everyone wants to buy. Already, however, the main institutional investors are long, and they will not be flipping shares. The only ones flipping shares are likely short-term investment funds, so they are flipping to retail investors. When the interest drops there is no one left to hold up the price, so it is worth keeping that in mind.

Cathie Wood also said in an interview on Wednesday that she would not buy Rivian at current levels. General Motors (GM) CEO Mary Barra said the Rivian IPO proves that General Motors is undervalued.

Too early to really have anything for you on the technical analysis front. Interesting to note though that the point of control or highest volume is down at $100.76, likely due to the large closing auction. 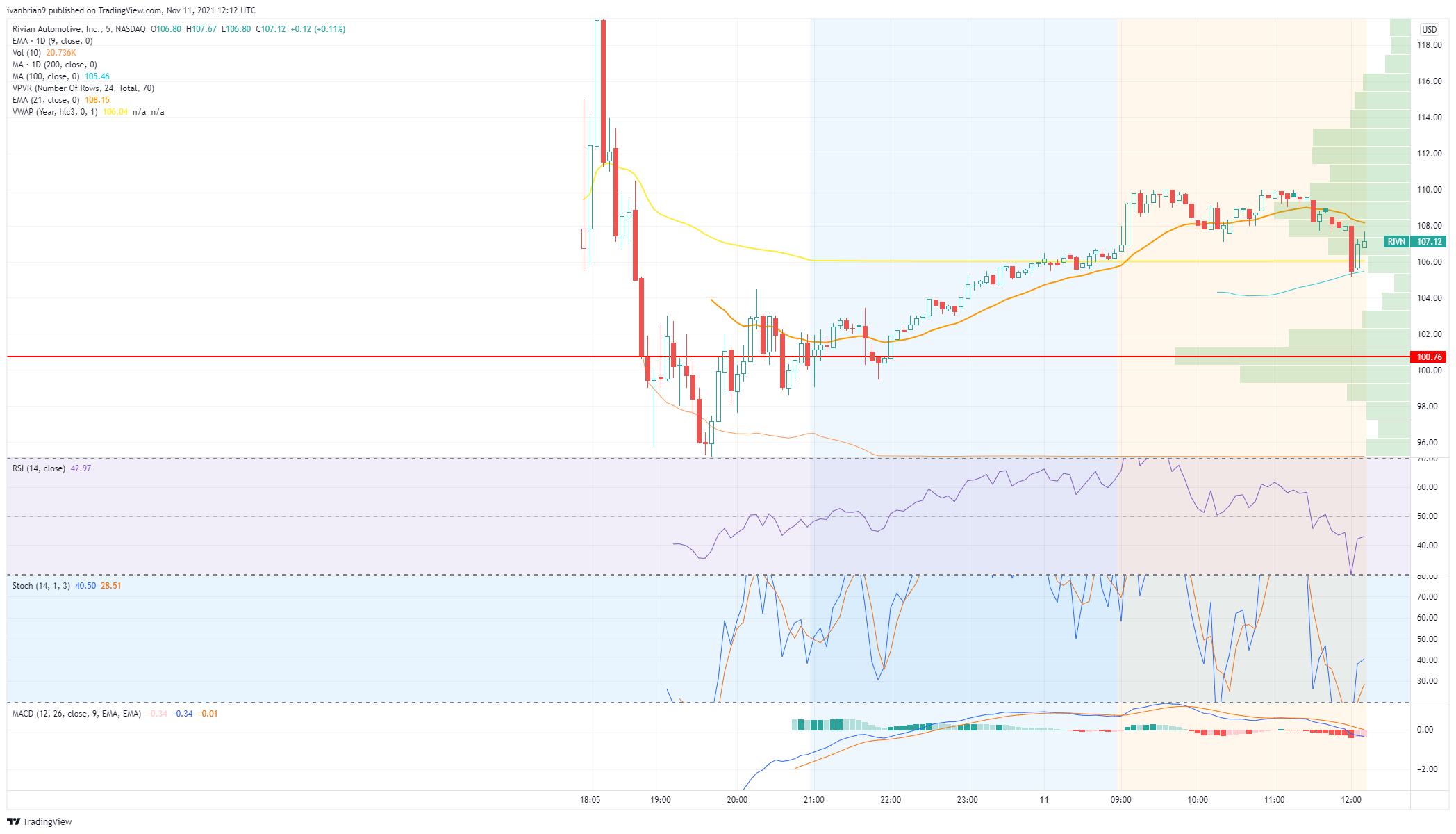