PSNY stock was brought to the market officially last week when the SPAC deal with Gores Guggenheim (GGPI) was formerly completed. GGPI stockholders had been asked to vote on the deal on June 24, and the results were positive. Polestar was then listed via one of the few SPAC deals this year under the ticker PSNY. Polestar is a Volvo/Geely spin-off and produces electric vehicles. The company follows a similar Scandinavian design ethos as Volvo.

Polestar is in some ways akin to BMW's M line and Mercedes' AMG models. Polestar was formed in the 1990s as Flash/Polestar Racing before Volvo bought it out in 2015. Volvo has been owned since the post-Great Financial Crisis era by the Chinese holding firm Geely. Polestar is backed by Volvo and its Chinese backer Geely, which enabled Polestar to launch its first vehicle, the Polestar 1, in 2017. The Polestar 1 was a plug-in hybrid. The Polestar 2 is a fully electric vehicle launched in March 2020 and is a sports sedan model. Polestar will launch an SUV, the Polestar 3, this fall.

Polestar made nearly 30,000 cars in 2021 and aims to increase production to nearly 300,000 by 2025. To do this, it will be able to use Volvo and Geely's manufacturing bases in South Carolina and China. SUV models are the most profitable model type for auto manufacturers because they have the highest margins. Polestar has also begun delivering EVs to Hertz (HTZ) as part of a deal for up to 65,000 cars, which Hertz and Polestar agreed to in April.

Polestar, for now, competes in the off-shoot auto market in the EV space, so the main overriding industry standard has traditionally been set by Tesla (TSLA). Tesla more or less invented the current EV market and has dominated it for some time. Polestar attempted to lift its image and brand awareness in the US by launching a Superbowl commercial taking a cheeky dig at some of its competitors, such as Tesla and Volkswagen. For now, Polestar remains a standalone from Volvo, but we do wonder how the situation will evolve once Volvo itself is fully electric. Will Volvo and Polestar compete as separate marques within the same parent group? Tesla (TSLA) has been facing challenges of its own as the stock price falls markedly this quarter. The Twitter (TWTR) takeover drags on and talk of job cuts and supply issues as well as China factory shutdowns has hampered Tesla this year (note: the author is short Tesla).

Gores Guggenheim was a special purpose acquisition company (SPAC) sponsored by The Gores Group LLC, which was founded by Alec Gores. Gores has a wide breadth of experience in the SPAC industry. Gores Guggenheim traded under the ticker GGPI and launched on the stock market in April 2021 via initial public offering (IPO). GGPI raised $800 million in its IPO. The business combination agreement with Polestar was completed once Polestar was listed on June 24.

Since the listing, PSNY stock has struggled to hold on to early enthusiasm. Initially, the legacy GGPI stock soared once the vote was carried to list Polestar. That saw the stock rally from below $9 to nearly $13. Polestar (PSNY) stock opened for trading last Friday at $12.98 and pushed up to $13.36 before closing nearly unchanged at $13. That was a worrying sign in itself, and we wrote last week that we expected the stock to suffer from a lack of news flow. However, we did not expect things to turn lower quite so quickly or dramatically. Indeed, Friday's candle has a huge wick, and this is often a turnaround signal as it shows indecision in the market. Since Friday, Polestar (PSNY) has been down every day this week, moving from $13 to back under $10 now.

As we mentioned last week, without a catalyst PSNY shares are likely to drift. Now that the SPAC deal has been completed the notional $10 support level is no more. SPACs are required to keep $10 per share to return to shareholders in the event of no deal. For now, we struggle to see a catalyst with equity markets remaining in cautious and generally risk-averse mode. The lack of a catalyst until the potential launch of Polestar's SUV in the fall could see more declines for PSNY stock. 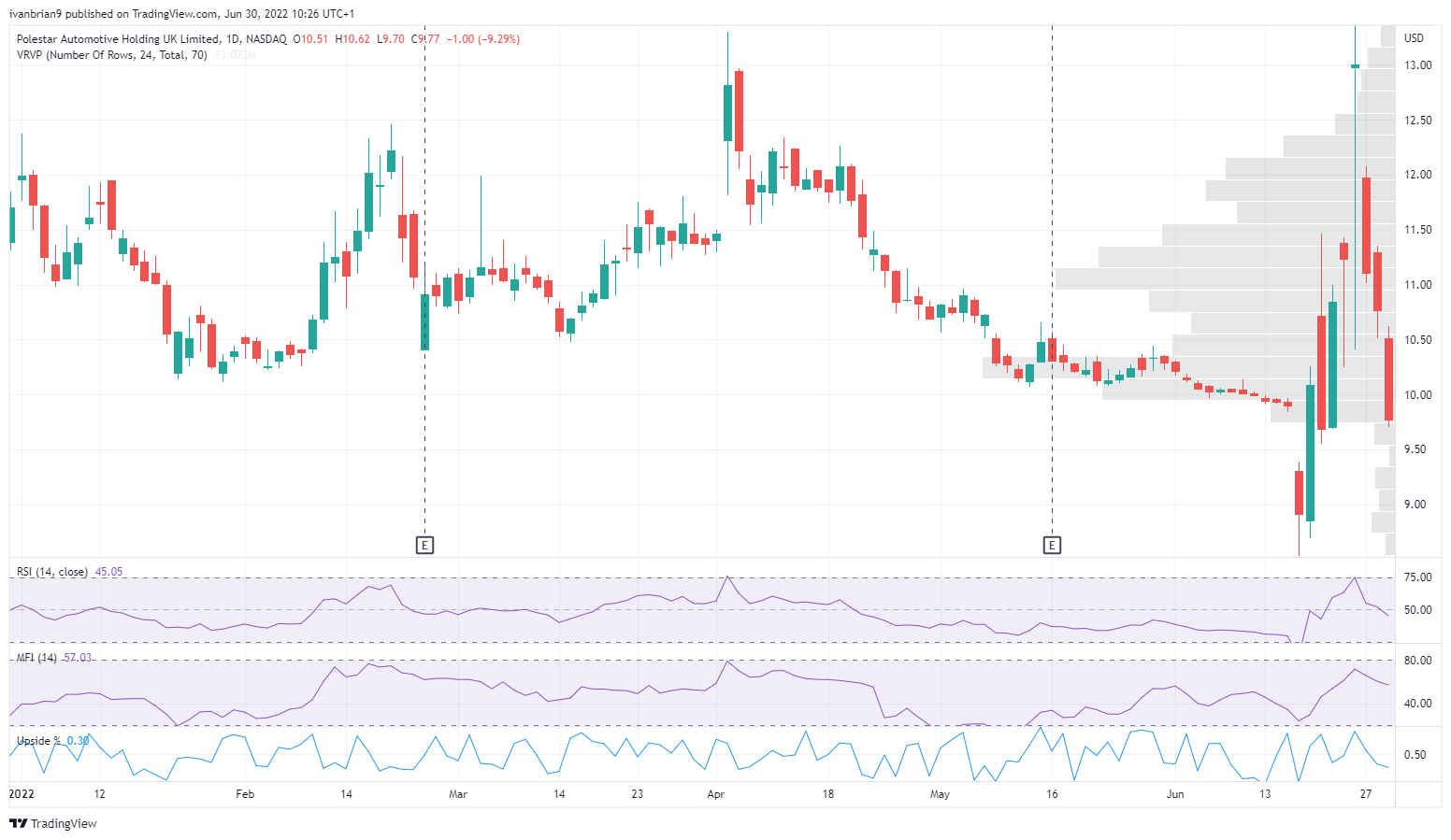