NZD/USD is 1.85% higher, rising from a low of 0.6275 on the day to reach a high of 0.6434. The bulls have taken the baton on the back of weakness in US yields and the greenback following the US inflation report. The kiwi is sporting a 0.64 handle for the first time since early June, but it is vulnerable to a correction as illustrated below.

Despite the prospects of a peak in US inflation, the market's broader sentiment is for the Fed to maintain its aggressive tightening bias in the months ahead. Nevertheless, US prices have risen 8.5% annually in July, a slower pace than the 9.1% rise reported in June and below analysts' consensus expectations for an 8.7% rise.

However, Federal Reserve's Neel Kashkari spoke after the data in late afternoon New York trade and has said that while he is happier to see inflation surprised to the downside, the Fed is far, far, far away from declaring victory on inflation. He added that ''this doesn't change my rate hike path'', and he is expecting 3.9% end of this year 4.4% end of next year.

''The Fed will be looking for "clear and convincing" evidence of inflation turning the corner, and we are not there yet,'' analysts at TD Securities argued. ''An epic collapse across USD pairs. The question is whether this will stick.''

While there are fewer possibilities of a 75bps hike in September with markets now in anticipation of just a 50bp rate hike instead, the Fed aims to reach a more restrictive policy posture before the end of the year and that would be expected to keep the greenback underpinned. This means, depending on data and other potential surprises, the kiwi will be vulnerable to ongoing strength in US yield and the US dollar.

''The first downside surprise in monthly headline inflation since September 2021 pushed investors to lower the odds of a 75bp hike in September from 85% to just 44% and the pricing for the terminal funds rate to 3.5% from nearly 3.7%,'' analysts at TD Securities noted. ''We expect market pricing for hikes to continue gyrating between extremes as investors digest more data ahead of the September FOMC. We think short-term price action will reflect risk sentiment,'' the analysts explained with respect to the values of the US dollar.''

Meanwhile, analysts at ANZ Bank noted that US bond yields had unwound most of their knee-jerk move lower. ''That leaves us a tad cautious, anticipating potential volatility. Still, the data has cleared the decks for the market to focus on the RBNZ MPS next week. We think it will be hawkish, and even if some of the dents is taken out of the USD in coming days, the RBNZ’s tone should help the NZD.'' 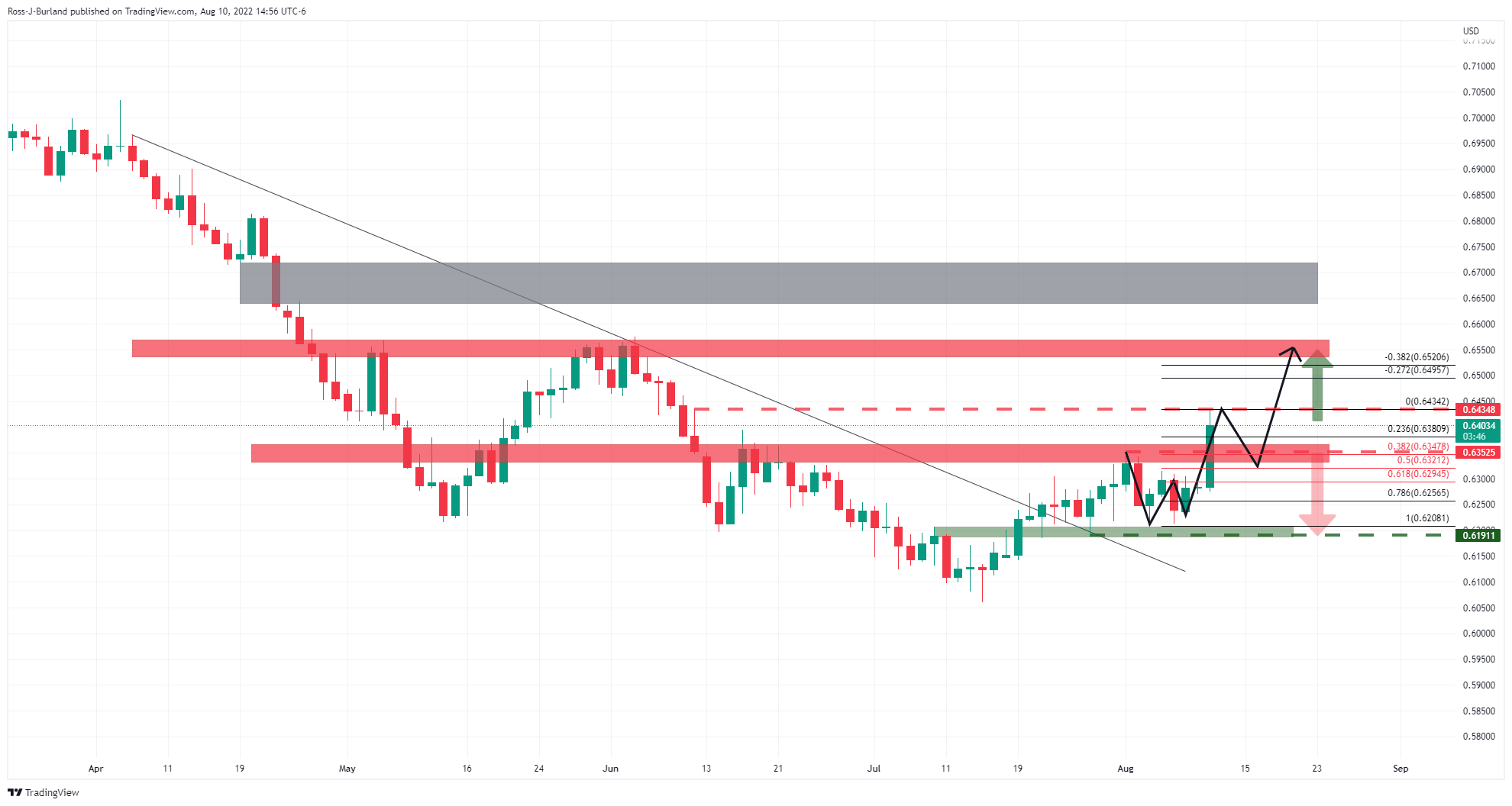 The price is in no man's land at this juncture, meeting resistance at a prior structure and could be due for a bearish correction, as per the W-formation on the daily chart. A 38.2% Fibonacci level meets prior resistance and below there we have the neckline of the formation at a 50% mean reversion.