Back from the cold – again. Nokia Oyj (NYSE: NOK) has surged by over 9% on Tuesday to close at $5.88, and investors are asking if there is more in store. The fallen Finnish telecommunications giant has seen several reinventions since the heyday of being the world's most dominant mobile phone maker. The current upswing could be another substantial one.

Here are three reasons to be bullish on Nokia:

The near future is brighter, according to Nokia CEO Pekka Lundmark. The relatively new leader pre-announced that the company would revise its full-year guidance for 2021 to the upside on July 29. The firm's current expectations stand at a range of €20.6-21.8 billion for sales, which is below the 2020 level of €21.9 billion.

American traders may be somewhat confused by sums in euros rather than dollars, but these exchange rates also contribute to an upgraded outlook. The recent decline of the common currency means dollar income rakes in more euros for the Espoo, Finalnd-based company.

Apart from financial, these better sales are also a result of higher demand for 5G equipment that Nokia sells. According to Lundmark, the equipment upgrade cycle is set to last twice as long as the 4G one. Moreover, concerns about technology – prevalent in the early days of COVID-19 – have diminished.

Bullishness from insiders is one thing – and an external positive opinion is another. SEB Equities kicked off the upgrade cycle in late April by recommending to buy the stock. Morgan Stanley followed in early May by labeling NOK as "overweight" from "neutral."

Goldman Sachs, one of the most influential players in financial markets, was next in line to shift gears from neutral to buy in late June. Moreover, analyst Alexander Duval set a target price of $6.50, above current levels.

The latest is JP Morgan, which put NOK in its "overweight" basket with an even more ambitious price objective – $7.80. That is 32% above Tuesday's closing price.

NYSE: NOK has surged above the critical $5.67 level which capped it on June 3, June 7 and finally on June 25, the day of that GS upgrade. The convincing upswing – and being able to close above that stubborn cap – is a bullish sign.

In its latest move, the price also launched off the 50 Simple Moving Average on the four-hour chart. NOK seemed glued to that level and now it is gone. 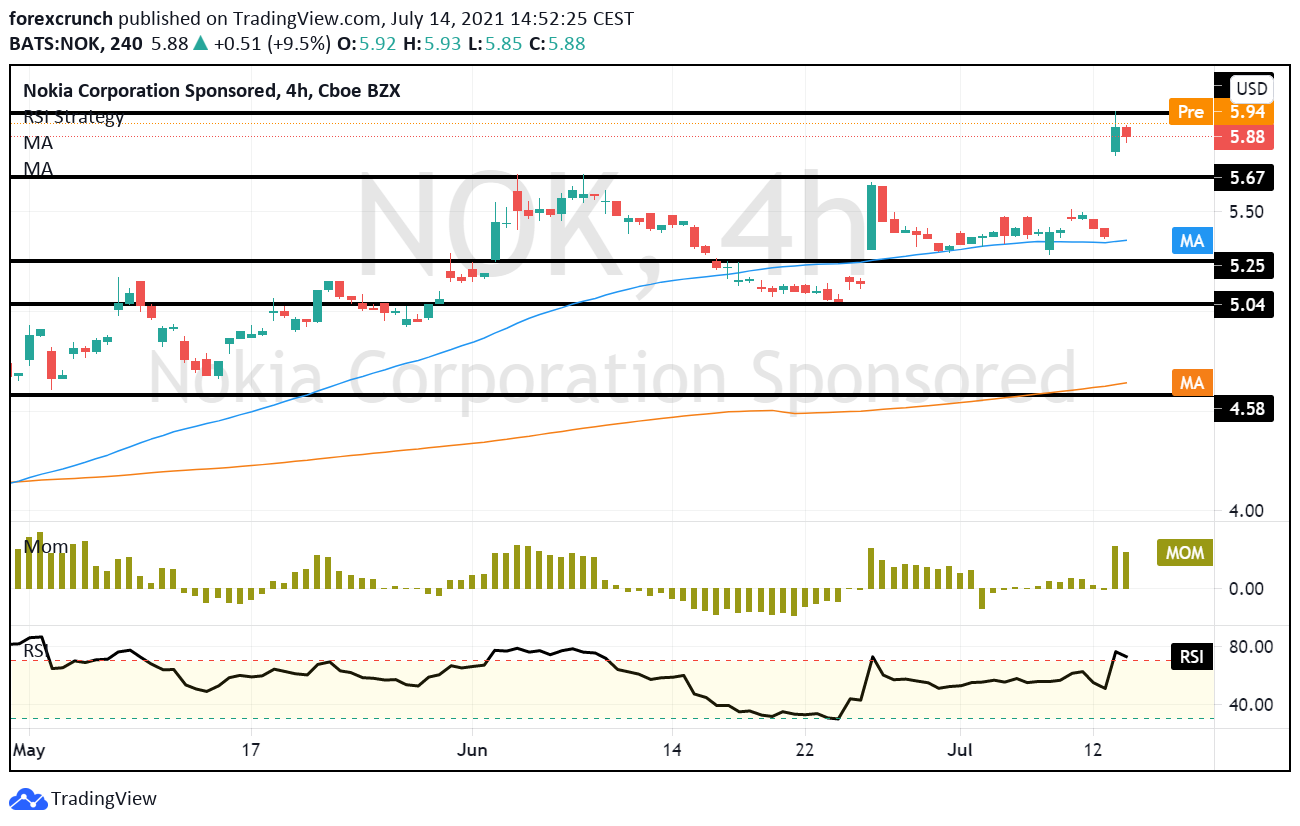 Zooming out to the daily chart, the 50-day SMA crossed above the 200-day SMA in May. This Golden Cross pattern has proved successful for bulls, which have enjoyed higher highs and higher lows.

Bears may find solace in the fact that the Relative Strength Index is above 70 on both the four-hour and daily charts – indicating NOK is suffering from overbought conditions.

Overall, there are reasons to be bullish on NYSE: NOK.