Netflix (NFLX) has been strong into earnings as investors digested the massive success of Squid Game and hoped this would feed through into very strong subscriber numbers. Netflix was out straight after the bell with earnings, and at first glance they certainly appear to be very solid numbers. Netflix beat on earnings per share (EPS) with it coming in at $3.19 versus $2.56 expected. Revenue more or less matched forecasts at $7.48 billion. Netflix also gave guidance for the next quarter with Q4 revenue guidance of $7.71 billion ahead of the average analyst forecast for $7.68 billion. EPS for the next quarter was on the low side at $0.80 versus the $1.10 analyst estimate.

Netflix added 4.4 million subscribers in the quarter, which was ahead of estimates for 3.86 million new additions. Going forward, Netflix says it will report on hours watched rather than the number of accounts that watch a title. Netflix added that it expects new customers of 8.5 million by the end of this year, ahead of Wall Street estimates for 8.33 million. The majority of customer growth came from the Asia Pacific region, while growth in the more developed market of US/Canada seems to be slowing.

We have the usual post-earnings price target changes coming through this morning. Goldman Sachs increases its price target from $590 to $595. Barclays boosted their price target to $675. Cowen&Co pushed their target to $750, which is also where JPMorgan now sits. Evercore ISI bumped their target up to $710, while at the lower end of the range Moffetnathanson increased their price target to $470. Netflix shares initially rose quickly on the numbers, but once time had been taken to work through the earnings investors appeared to sell the news. The stock is currently down 1.54% in the premarket.

Why is Netflix (NFLX) stock down?

The results were good but perhaps not blowout to keep the soaring share price going. Netflix (NFLX) stock is up nearly 10% in the last month and 24% in the last 3 months. EPS was a solid beat, but revenue was just in line. Netflix also guided the next quarter EPS lower. The main reason though is the old adage: "It is better to travel than arrive for stocks." This may also be the case for TSLA as it also has had a decent run into numbers.

This was our call before results on Tuesday, and we stick with it: "In FXStreet's view, the risk-reward is to the downside." As mentioned, the big surge in the share price on the back of Squid Game has led to a flag pattern. This is a continuation pattern, but the lower support is at $625. Breaking this ends the bullishness and turns the stock neutral. Our options call from Monday ahead of earnings – buying a $595 put for October 22 – is working out nicely. There may be more to come if Netflix breaks lower from the flag formation, with the MACD giving us a crossover sell signal and no major support until $606. We think the risk reward is to the downside.

1. The stock has had a strong run ahead of earnings.

2. Breaking the flag pattern will lead the stock lower.

3. EPS guidance for Q4 is lower than forecast. 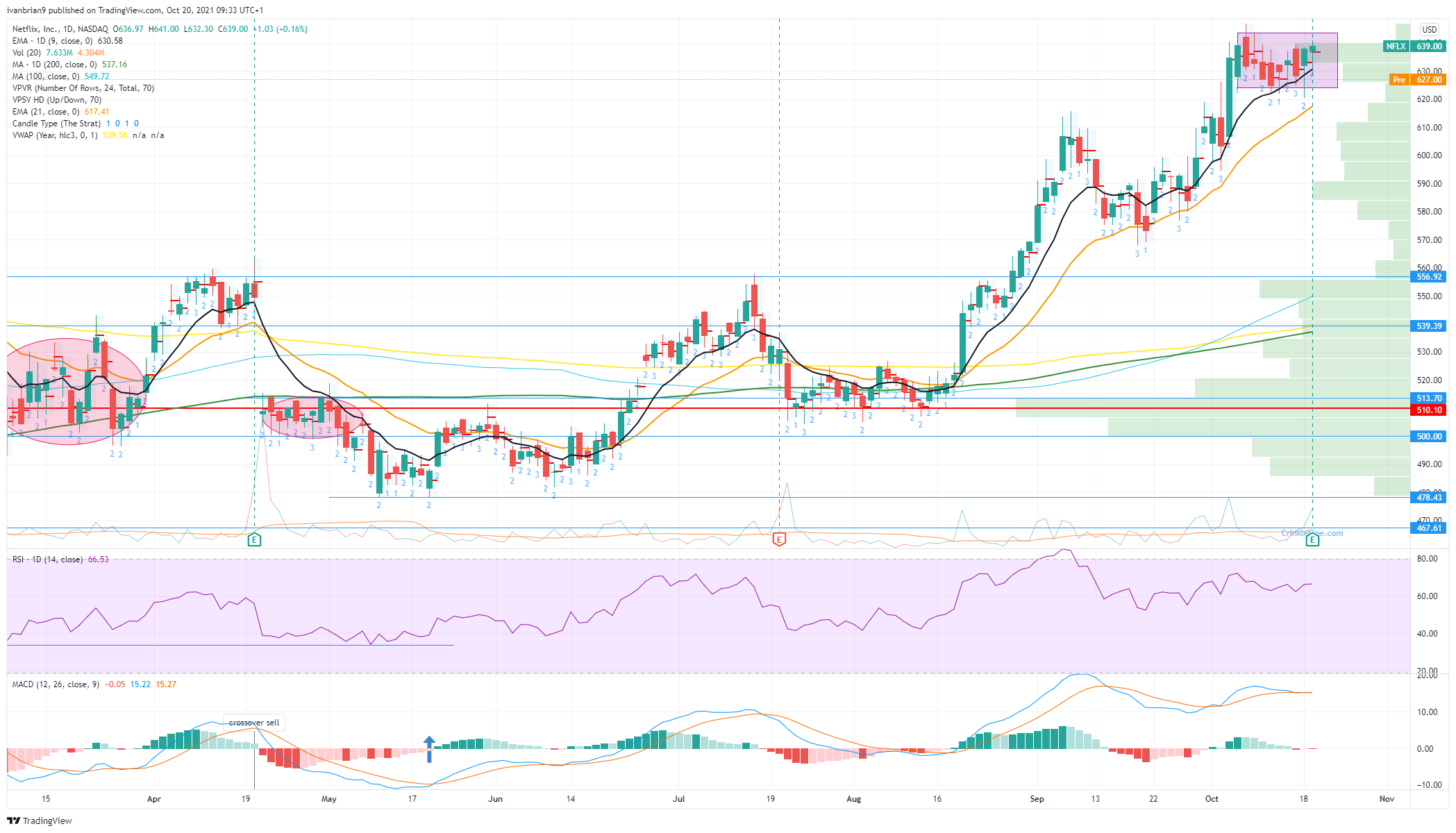