At $1,807.17, the gold price is slightly underwater in the midday North America session and holiday markets. Bond markets have been closed for the US Independence Day holiday but the greenback has seen two-way action which has both supported and sunk gold at the start of the week.

Despite being down on the day, the gold price remains above its lowest level scored since early February which was made on Friday amid a risk-off environment that had supported the greenback. The yellow metal was also pressured after India unexpectantly increased its import tax after a ballooning trade gap pushed the rupee to a record low. ''This could weaken demand just as outflows from gold-backed ETFs pick up,'' analysts at ANZ bank argued. ''Rising inflation has raised the likelihood that central banks will aggressively hike rates, dampening the appeal of the precious metal.''

Despite the yellow metal's safe-haven allure, gold is a non-interest-bearing asset class which is keeping a lid on advancements in gold at times of risk-off. ''Gold prices have disconnected altogether from market pricing for Fed hikes over the past month, and have instead grown their relationship with the USD, pointing to a smaller magnitude of idiosyncratic flows for the yellow metal,'' analysts at TD Securities have argued.

''Liquidity is being sapped from global markets, and gold flows have not been spared. After all, the massive amount of potentially complacent speculative length from proprietary traders in the yellow metal does not appear to be associated with a Fed narrative nor with a stagflationary view of the world, considering that this length was accumulated as early as 2020,'' the analysts explained, saying, ''in turn, while the bias remains to the downside in gold, participants will need a catalyst to shake out the complacent longs in precious metals.''

Meanwhile, the US dollar at the start of the week was weaker until the start of the New York session, bleeding out from the two-week high made on Friday. Reports that the White House will announce an easing of some Chinese tariffs later this week in an attempt to dampen elevated inflation helped inject some optimism back into markets on Monday.

Additionally, we had data on Friday that showed euro zone inflation was surging to another record. This has hardened the case for the European Central Bank to raise interest rates later this month for the first time in a decade. However, moderate action is expected in comparison to the Fed and the divergence between the two central banks could be perceived to be more favourable for the US dollar in the medium term.

For the week's calendar, Nonfarm Payrolls is expected to show that Employment likely continued to advance firmly in June but at a more moderate pace after three consecutive job gains of around 400k in March-May, analysts at TD Securities said.

Meanwhile, the minutes of the Federal Reserve's June meeting will also be eyed.

''Persistent high CPI inflation and nascent signs of de-anchoring inflation expectations forced the Fed to amp the pace of rate tightening. The meeting minutes are likely to offer further colour around the Fed's more hawkish reaction function,'' the analysts at TD Securities said.

The yellow metal is trapped in a consolidation range, moving within a $10.29 range around Friday's highs. A break of today's lows could entice a long squeeze and potentially encourage more selling for a downside continuation below $1,785 for the sessions ahead: 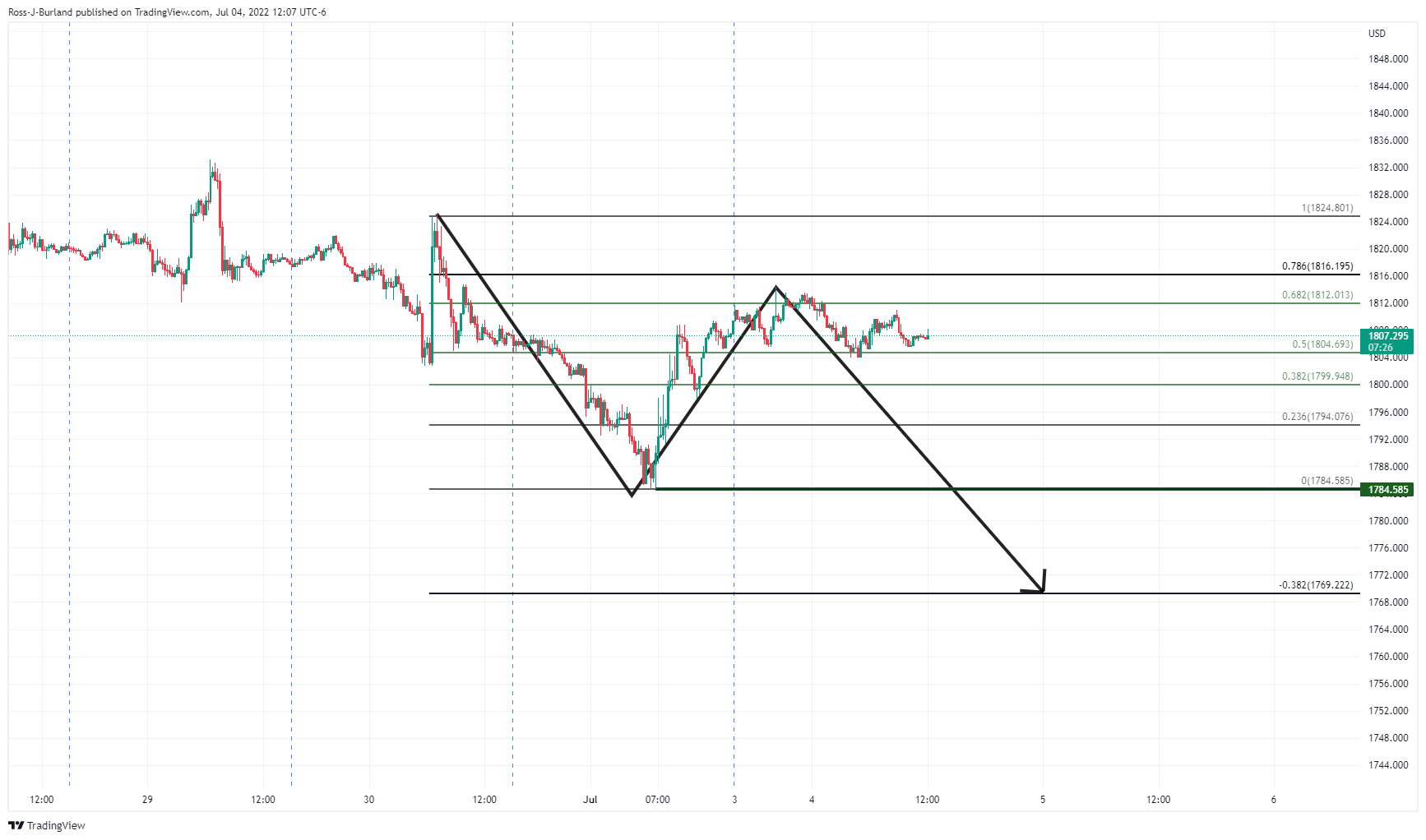 AUD/USD regained 0.6500 and aims to extend its advance

The AUD/USD pair trades around 0.6520, as the better tone of equities and profit-taking due to extreme overbought conditions took its toll on the greenback. Positive momentum is set to continue, at least in the near term.

The EUR/USD pair soared in the latest American session after reaching a fresh 22-year low of 0.9535. The greenback entered a selling spiral after Wall Street changed course while government bond yields sunk.

Statistically, October and November are usually bullish months for crypto. There is nothing wrong with casting a rod in treacherous water, but risk management should be applied. Don't become the bait when fishing for gains.

With inflation high and volatile, and with uncertainty about how quickly inflation might return to pre-Covid levels, should investors consider Treasury Inflation Protected Securities (“TIPS”) as part of a conservative portfolio allocation or for portfolio diversification? To answer the question, it is helpful to understand what TIPS are and how they work in practice.