Gold price turns positive after diving to new weekly lows around $1766.90 and grinds higher amidst a buoyant US Dollar (USD), even though US Treasury yields are weakening, amidst a risk-off impulse spurred by increasing recessionary jitters. That said, the XAU/USD is trading at $1769.48, almost flat, at the time of typing.

US data put the Federal Reserve in the spotlight

Since last Friday, US economic data revealed had increased likelihood of additional Federal Reserve tightening. The US Nonfarm Payrolls report showed that the economy added 263K new jobs, above estimates, and depicted that workers are looking for higher wages. Why? Because the Average Hourly Earnings on a YoY comparison jumped from 4.9% to 5.1%.

Monday’s data further cemented the case for a hotter-than-expected US economy. Even though last week’s ISM Manufacturing PMI dropped to contractionary territory, the services component rose 56.6, above 53.3 forecasts. According to Bloomberg, “The service sector expanded faster in November, with the holiday season bolstering business activity. The price subindex confirmed the inflationary impulse in services is still strong despite more widespread disinflation in goods sectors.”

Earlier, the US Department of Commerce (DoC) revealed that Trade Balance in the United States widened to $-78.2B compared to September’s $-74.1B, beneath estimates of $-80B. Although the trade deficit expanded, data was mainly ignored as investors assessed the US economy.

Given the backdrop mentioned above, the next week’s Federal Reserve Open Market Committee (FOMC) meeting would be crucial, albeit the Federal Reserve Chair Jerome Powell gave the green light on 50 bps rate hikes. However, with US data looming, like the Producer Price Index, the University of Michigan (UoM), and the following week’s Consumer Price Index (CPI), it would shed some cues about inflation elevating or easing.

From a technical perspective, Gold remains upward biased. However, after breaching the $1800 figure last Friday, the yellow metal failed to capitalize on broad US Dollar weakness, as XAU/USD tumbled below the $1800 mark. Gold buyers’ lack of strength is well portrayed by the Relative Strength Index (RSI), registering a series of lower peaks, while price action is aimed upwards. Also, the Rate of Change (RoC) confirms buying momentum is fading.

If XAU/USD drops below the 200-day Exponential Moving Average (EMA) at $1759.79, that could pave the way for further losses. Otherwise, if XAU/USD buyers reclaim the November 15 daily high of $1786.53, that could exacerbate a re-test of the $1800 psychological level. 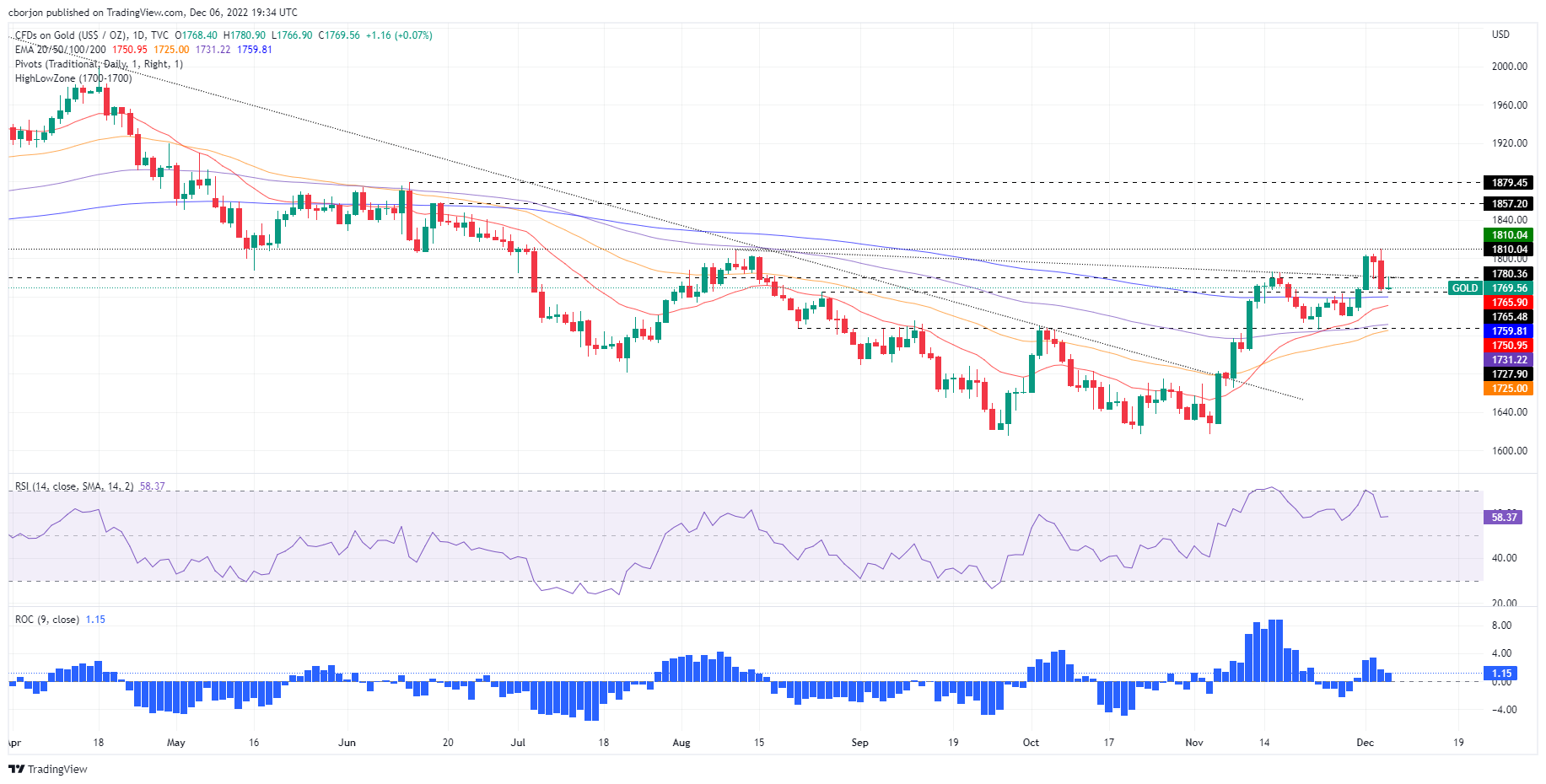 Vechain: No one wants to buy the top

Growth in Australia should be sturdy enough to avoid recession, and with inflation still elevated at the highest rate in over 30 years, we do not expect the Reserve Bank of Australia (RBA) to cut rates from now through mid-2024.