Gold is down for the sixth consecutive day on Monday amid an environment that is favouring the US dollar while looming Federal Reserve interest rate hikes weigh on bullion's appeal. The hawkish expectations from a speech at the Jackson Hole, Wyoming central banking conference later this week by Fed Chair Jerome Powell have put a bid on the greenback and are weighing on risk appetite.

In the build-up to the Jackson Hole, there has been a chorus of speakers from the Fed, and last week was particularly busy in that respect.  The most hawkish of Fed officials was Bullard who expressed a desire for a 75bp hike at September's meeting and added he isn’t ready to say the economy has seen the worst of the inflation surge. “We should continue to move expeditiously to a level of the policy rate that will put significant downward pressure on inflation” and “I don’t see why you want to drag out interest rate increases into next year,” Mr Bullard said in a Wall Street Journal interview. The latest of these officials, Richmond Fed President Thomas Barkin, on Friday said the "urge" among central bankers was toward faster, front-loaded rate increases.

Meanwhile adding to the risk-off mood,  Russia's announcement late on Friday of a three-day halt to European gas supplies via the Nord Stream 1 pipeline at the end of this month sank the euro, supporting DXY higher.  On the weekend, Bundesbank President Joachim Nagel told a German newspaper that the European Central Bank must keep raising rates even if a recession in Germany is increasingly likely, as inflation will stay uncomfortably high through 2023. The combination has sent the euro below parity vs. the greenback again. At the time of writing, EUR/USD is down by over 1% to a low of 0.9926.

Elsewhere in the forex space, China's yuan dropped to its lowest in nearly two years after the country's central bank cut its benchmark lending rate and lowered the mortgage reference by a bigger margin on Monday. The people's Bank of China's move is adding to last week's easing measures to support the ailing economy in the face of a resurgence of COVID-19 and the property crisis. This has also supported the greenback and has weighed on precious metals.

''Shanghai traders have also been unwinding their recent length, with lockdowns and industrial woes likely to weigh on Chinese demand,'' analysts at TD Securities said. ''Our tracking of positioning for the top ten traders in Shanghai suggests they have sold nearly 40,000 SHFE lots of silver over the past month, in contrast with the nation's blockbuster imports of gold from Switzerland in July.'' 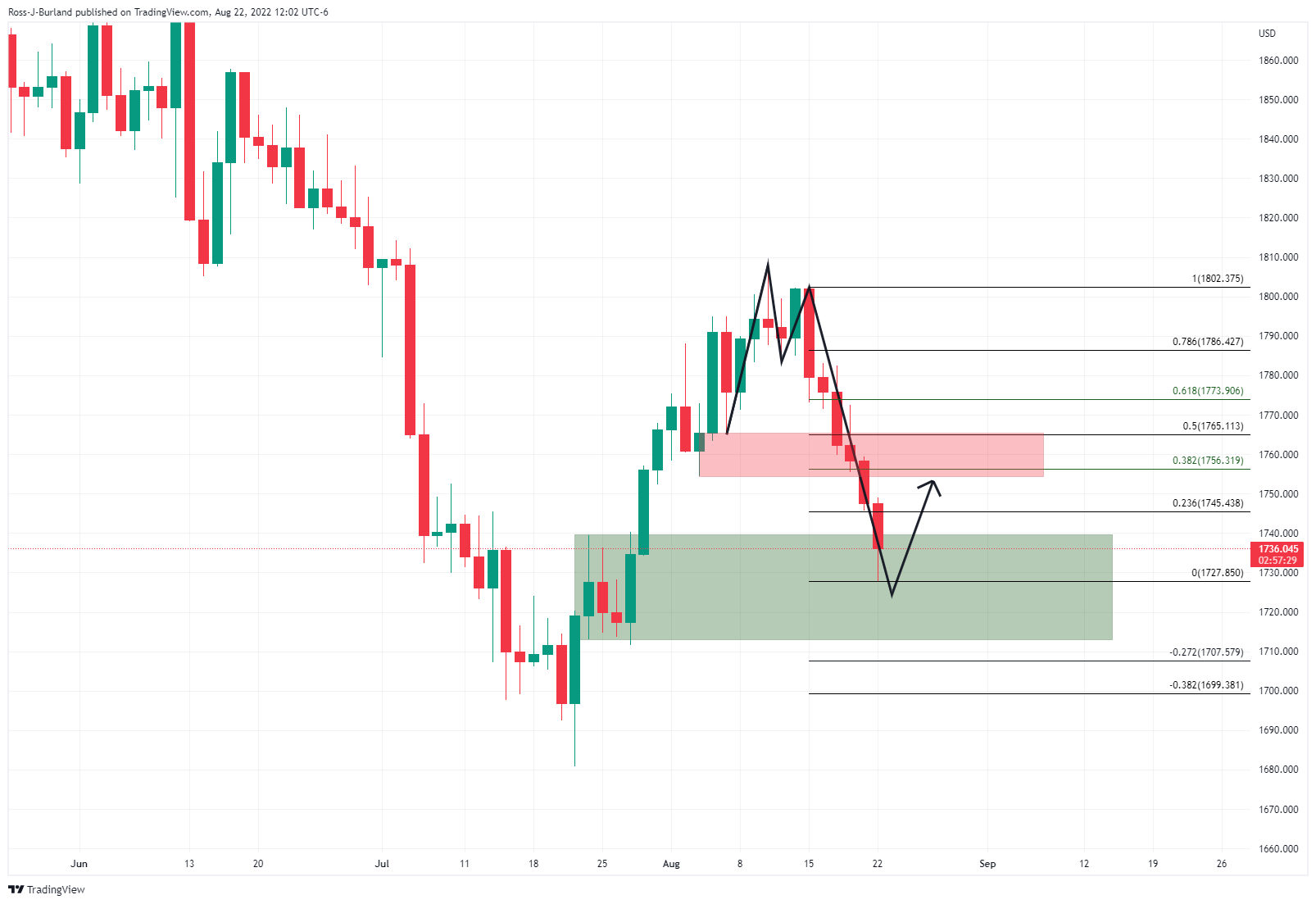 The price of gold has left behind an M-formation on the daily chart, a reversion pattern that would be expected to see the price revert towards the neckline in due course. However, given the over-extension of the latest impulse, the correction will more probably only reach as far as the prior support near a 38.2% Fibonacci around $1,755. Meanwhile, the bears have their sights on $1,710 support.