Despite the market optimism, gold struggles to extend the advance above $1900, as investors turn cautious ahead of the critical US Retail Sales and Michigan Consumer Sentiment data due later on Friday. Let’s take a look at gold technical charts, as it remains on track to book a weekly loss.

The Technical Confluences Indicator shows that the yellow metal is stuck in a narrow range so far this Friday, now confronting the immediate upside barrier at $1910, which is the convergence of the previous day high and Bollinger Band 15-minutes Upper.

The next significant resistance is seen at $1912.50, the intersection of the previous high on four-hour and SMA5 one-day.

Only a sustained move above the latter could revive the bullish momentum, as the buyers aim for $1917, the Fibonacci 23.6% one-week. Further up, the pivot point one-day R2 at $1922 could likely challenge the bulls’ commitment.

On the flip side, a move below the dense cluster of support levels around $1904/02 would trigger a fresh leg down in the spot. That confluence area comprises of Fibonacci 38.2% one-month, SMA5 four-hour and SMA200 one-hour.

The next soft downside cap is aligned at $1985, where the SMA100 four-hour coincides with the Fibonacci 61.8% one-week. 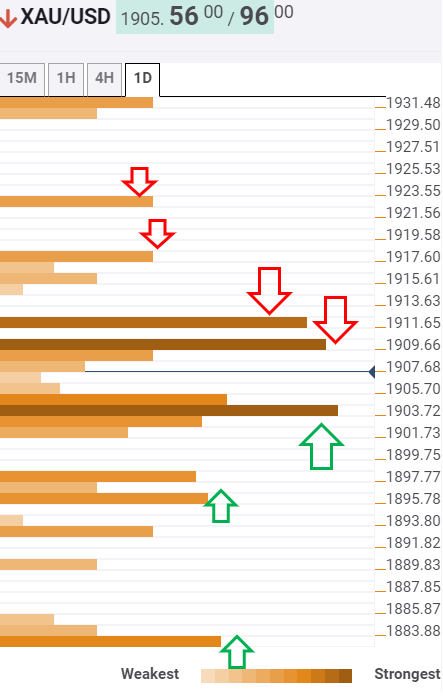