The single currency regains some balance and lifts EUR/USD to daily highs in the 1.0380/85 band on Wednesday.

EUR/USD looks firm ahead of Powell

After three daily pullbacks in a row, EUR/USD prints decent gains and looks to reclaim the 1.0400 neighbourhood on the back of fresh weakness hurting the greenback.

Indeed, the pair marches on a firm foot amidst a flat performance in US and German yields and rising prudence ahead of the speech by Chief Powell later in the NA session.

An interesting calendar in the euro area saw Germany’s Unemployment Change rise by 17K people and the jobless rate tick higher to 5.6%, both prints for the month of November. Additionally, flash figures now see the headline CPI in the broader euro area rise at an annualized 10.0% in November and 5.0% when it comes to the Core CPI. 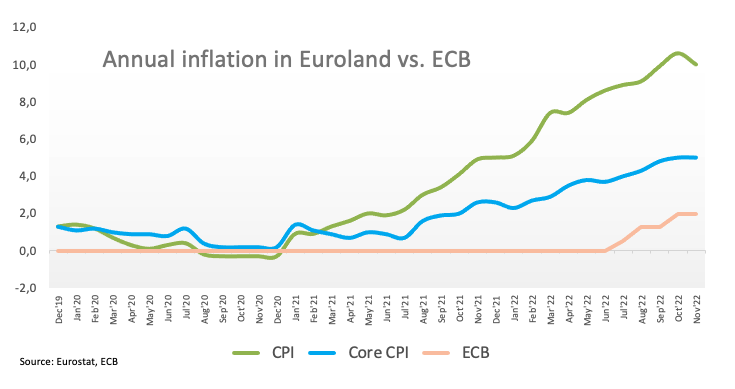 Across the Atlantic, Chair Powell will speak on “Economic Outlook, Inflation and the Labor Market” and FOMC Governor L.Cook will also speak on “The Outlook for Monetary Policy and Observations on the Evolving Economy”.

EUR/USD sees its upside bias renewed on Wednesday in response to the fresh downside pressure in the dollar, while expectations ahead of the speech by Fed’s Powell remain on the rise.

In the meantime, the European currency is expected to closely follow dollar dynamics, the impact of the energy crisis on the region and the Fed-ECB divergence. In addition, markets repricing of a potential pivot in the Fed’s policy remains the exclusive driver of the pair’s price action for the time being.

Back to the euro area, the increasing speculation of a potential recession in the bloc emerges as an important domestic headwind facing the euro in the short-term horizon.

Eminent issues on the back boiler: Continuation of the ECB hiking cycle vs. increasing recession risks. Impact of the war in Ukraine and the persistent energy crunch on the region’s growth prospects and inflation outlook. Risks of inflation becoming entrenched.