EUR/USD is treading water in the green at the start of the week and holding up by 0.20% in the midday New York session. The pair has ranged between a low of 1.0159 and 1.0221 so far and is currently trying to hold onto 1.0200 but is pressured. The US dollar has given back some of the gains made after last week's blockbuster Nonfarm Payrolls data that has soothed some of the fears about an economic slowdown.

Nevertheless, investors remained cautious as the payrolls data added to expectations of a hawkish US Federal Reserve. US rate futures have priced in a 67.5% chance of a 75-basis-point hike at the Fed's September meeting, up from about 41% before payrolls data on Friday beat market expectations.

However, US 10-year yields are anchored below 2.869% so far, ducking below those recently made highs. However, there is daily support in Monday's lows near 2.7610% at this juncture which could mean the relief is temporary with the focus now on consumer prices data on Wednesday. The inflation data will help to confirm if the Fed's tightening efforts have been successful in starting to tame inflation or if continued Fed tightening is needed and could be a critical milestone for forex markets and indeed the euro.

''Insofar as the strong payrolls release was unable to push EUR/USD outside of the range that has been maintained since late July, the market will now be looking for fresh direction,'' analysts at Rabobank argued.  ''Although we would expect the EUR/USD 1.01 area to act as solid support going forward, we retain the view that EUR/USD is likely to drop back below parity again on a 1 to 3-month view. However, for this to happen USD strength will likely have to be complemented with another bout of fresh EUR negative news.''

Meanwhile, domestically, the analysts at Rabobank see the odds of a recession in the Eurozone as ''strong'', though also note, that recent reports have played down the prospects of energy rationing for the industry.

''While the news on gas storage has been reassuring, a cold winter and the possibility that gas through Nord Stream 1 is totally shut off are among the risks that are faced by Europe in the months ahead.''''FX positioning data suggest that the market has already built up substantial short EUR positions.

This will de-sensitise the single currency to bad news to some degree. That said, faced with uncertainties connected to energy supply, recession and Italian politics we continue to see further downside potential for the EUR on a 1 to 3-month view.  Coincidentally, we expect the USD to remain well supported in this period.''

Firstly, it is worth noting that the US 10-year yield's support zone could see the price rejected higher again in the coming days: 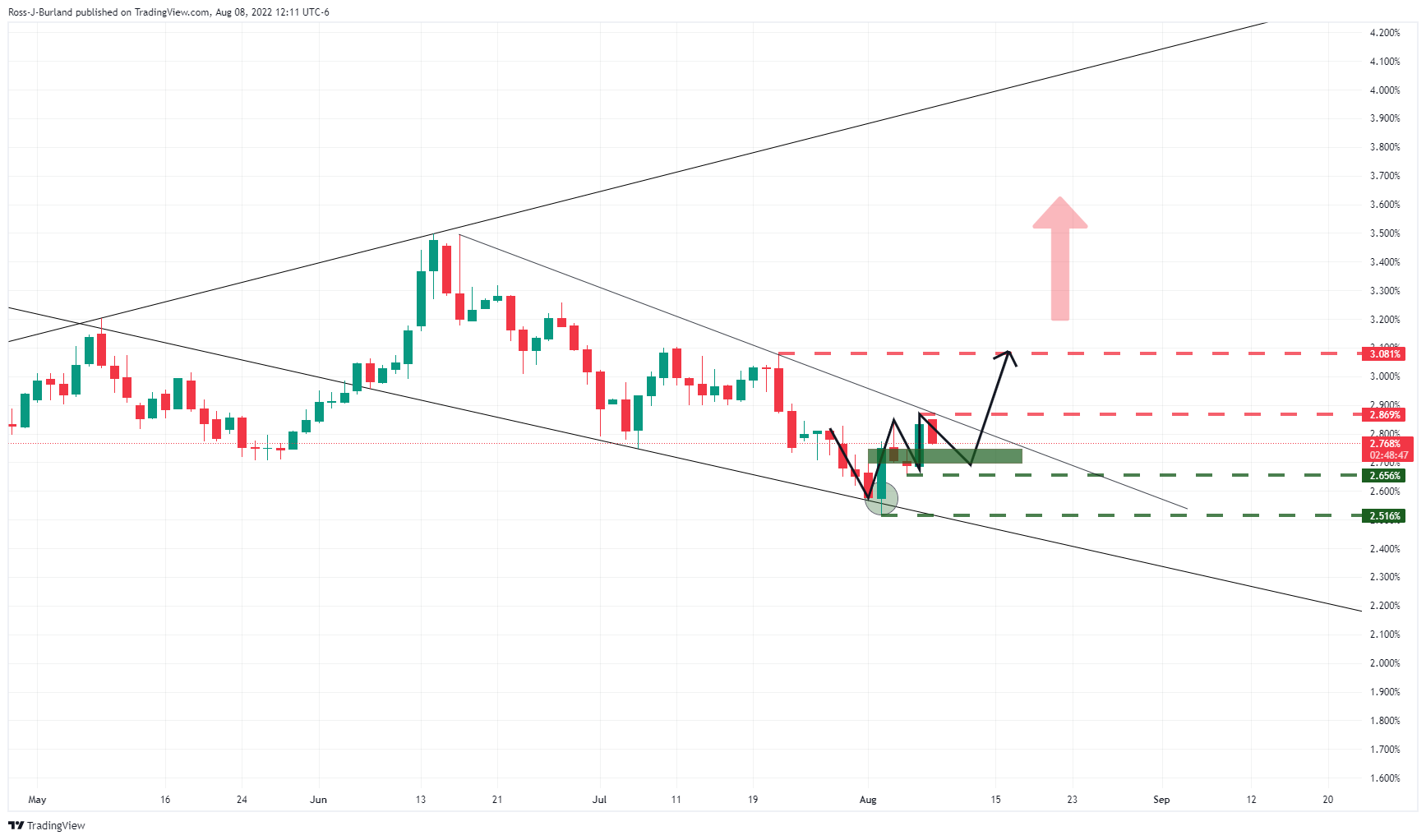 Meanwhile, as per the EUR/USD prior analysis, the H1 M-formation pulled in the price and there was a follow-through beyond the neckline resistance which gave way to a stronger correction into the 78.6% Fibonacci retracement level as follows:

It was stated that the M-formation that was developing was a reversion pattern ''that would be expected to see the price attracted to the neckline again in due course.'' 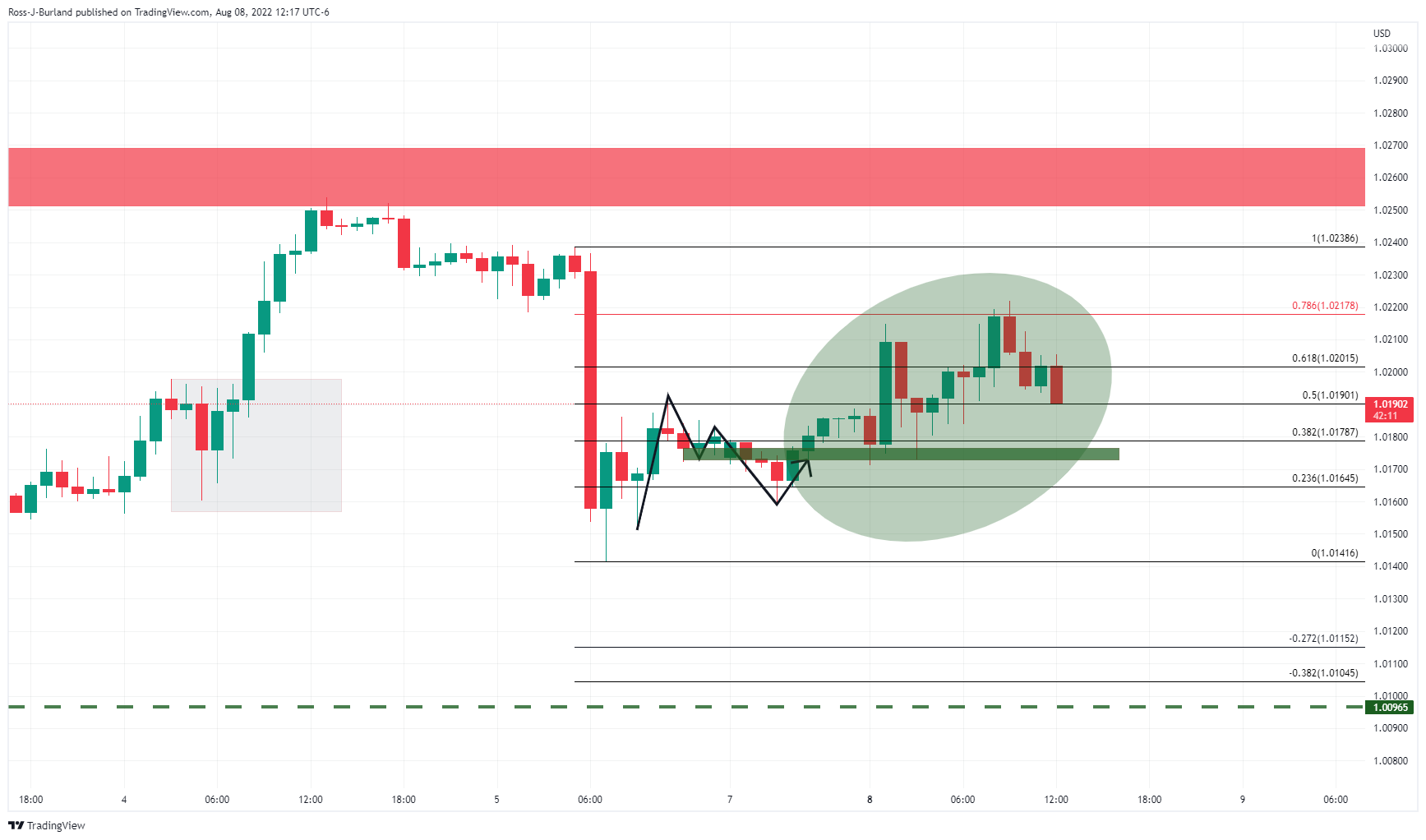 The bulls have run away with it but given the bullish environment surrounding US yield and the greenback, the floodgates could open up below 1.0150.