BlackBerry Ltd. (NYSE: BB) is not only a blast from the past – but also a hot stock in 2021. The Canadian maker of handhelds – one belonging to then-president Barack Obama – has genuine reasons to rise, including deals with three large tech firms.

However, the experts at RBC suspect that the recent rise in its shares makes it overvalued. Paul Treiber, an analyst at the bank, downgraded the stock to "underperform" from "sector perform. " Treiber cited a drop dollar-based net revenue retention in BB's third-quarter results and also doubted the chances of the firm significantly benefiting from Intellectual Property. Investors beg to disagree. 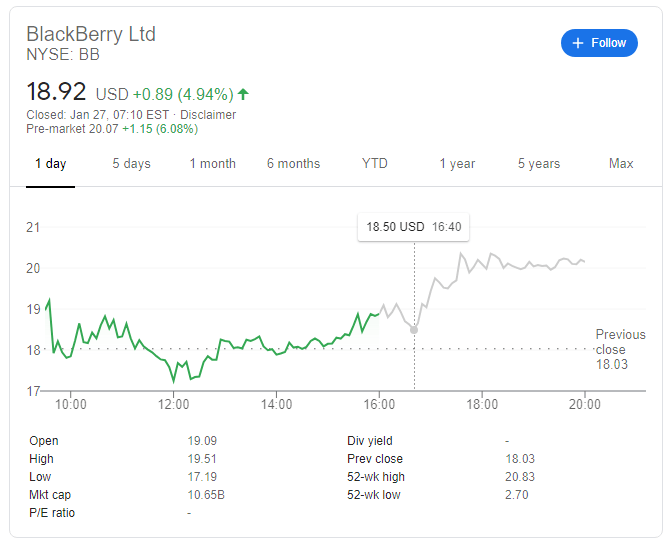 NYSE: BB has risen by 4.94% on Tuesday and Wednesday's premarket trading That would put it at fresh nine-year highs – it last traded at these levels in 2012, when around the time that Obama probably picked another phone.

Will the retail crowd drop Gamestop (NASDAQ: GME) and pick up NYSE: BB? While these tech firms are in different fields, both are valued at around $10 billion and both are garnering the attention of retail traders. The Gamestop army of Reddit retail traders against hedge funds is related to options, some expiring on Friday. Will Wall Street Bets' participants move to another target of a similar size?

Another point to watch is a bearish sentiment from institutional against enthusiasm from smaller investors. An answer to this question could be seen toward the of the week.