NYSE:AMC has unfortunately been stuck playing reruns for investors as the stock has continued to plunge following the Reddit short squeeze a couple of weeks ago. On Monday, the beleaguered theater chain dropped another 9.38% to close the first trading session of the week at $6.18, which means shares have now fallen nearly 70% off of their recent high of $20.36. While it was reported that AMC has avoided bankruptcy with the recent price surge, it seems as though retail investors are quickly abandoning ship as the Reddit movement loses momentum.

AMC has also reported several disparaging figures including a 92% year-over-year fall in ticket sales in the fourth quarter of 2020. This should not really come as a surprise as the COVID-19 pandemic continues to keep people in their homes, but what people may not know is that AMC has 75% of its theater locations fully open. Even given the opportunity to attend, people are opting out of going to the movies, which of course does not bode well for a post-pandemic world. 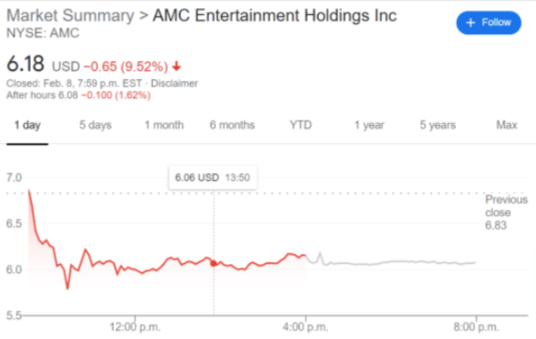 But depressed ticket sales are not the only issue threatening AMC, as studios such as Disney (NYSE:DIS) are skipping theater releases altogether. Instead, Disney is utilizing its Disney+ streaming platform for its 2020 releases Mulan and Soul, as well as its upcoming Marvel series the Falcon and the Winter Soldier. With no real end to the pandemic in sight, it could be a lot more pain in the short-term for AMC who may need further assistance to stave off bankruptcy again down the road.